The following article includes discussions on the current situation and prospects for the Nouveau Parti anticapitaliste (NPA – New Anticapitalist Party) of France. It includes the debate about participation in the upcoming elections and “new political representations” such as Syriza and Podemos. 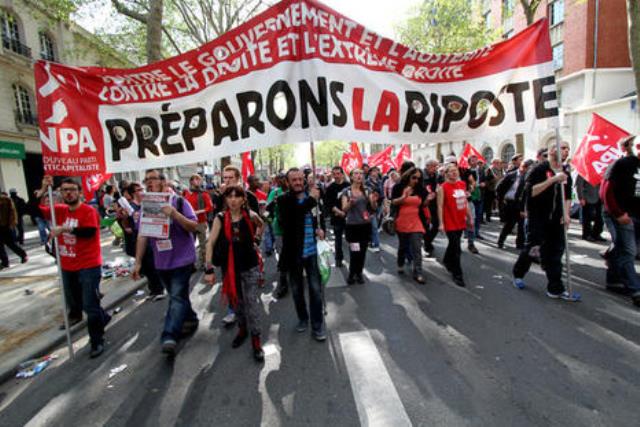 This is a translation and adaptation of an article originally published in La Izquierda Diario.

The debates at the National Conference of the New Anticapitalist Party (NPA) of France, which will take place at the end of March, are at first glance centered on an immediate question: the presence of the NPA in the upcoming presidential elections and the contents of its campaign. However, it should be noted that there is much more at stake than this. This is not only because everyone knows that the absence of the NPA in the upcoming elections would undoubtedly have consequences for the party’s future. It is also because behind this presidential debate is another, more strategic debate: a debate about the construction of the party after the failure of the initial NPA project.

So it is not surprising that comrades of the former NPA majority (grouped in Platform C) link their proposal for the opening of a unitary process for the presidential elections to the idea of a “new political representation of the exploited and oppressed”. The assessment of the starting point is widely shared: the definitive metamorphosis of the Socialist Party (PS) into a ruling-class party and the decline in influence exercised by the Communist Party (PCF) among average workers has created a vacuum of representation for the workers’ movement in the political arena, given the weakness of the far left today. This explains the rising influence of Marine Le Pen’s National Front within a section of our class, around a supposedly populist demagoguery.

In this context, the comrades of Platform C feel that it is necessary to, if not promote, at least “keep the possibility open” for the emergence of a Syriza- or Podemos-like phenomena in France, parties that are the embodiment of this “new representation”. It is from this point that various problems arise.

The first is the balance sheet that we need to draw of Syriza and Podemos and how quickly these organizations renounced their own programs as control of government institutions became a real prospect for them.

After the capitulation of Tsipras, it seems that the time has come to make some important disclaimers with regards to Podemos. After months playing the role of rejecting the “la casta” (the [political] caste), of which the PSOE is a central pillar, Pablo Iglesias just launched the proposal to constitute a new government with the PSOE, in which Iglesias would be vice president. This is a telling image of these so-called “new representations”: failing to be truly controlled by the exploited and lacking a strategy of class-independence and anti-capitalism, end up quickly transitioning into holding positions opposed to the interests of those they supposedly represent.

On the other hand, in both the case of Syriza and Podemos, existing ties between these organizations and the working class are extremely superficial and weak. In the case of Syriza, a connection with the working class was primarily electoral and through their relationship with some union leaders. In the case of Podemos, from the beginning, there has been a desire to dissolve the labor movement (which has nevertheless carried out important struggles in the last few years) into a nebulous, multi-class agent: “los de abajo” (those from below), “ciudadanos” (citizens) and “indignados” (the indignant/outraged) in general. All of this is far removed from the emergence of a “class party,” which we have seen in the past, such as the Brazilian Workers Party, born of the great metalworkers’ strikes of 1978-1981.

Additionally, in France today we are not – as the comrades of Platform C are the first to remind you – in a situation of rising class struggle. Nor do we have a movement of the “indignados”, or strikes in the suburbs of Sao Paulo. In this context, the comrades of Platform C are thinking of the presidential campaign as a first expression of “new representation”, in which they want to engage with the “left of the left” and new social movements. However, this kind of politics cannot yield anything but situations like the regrettable episode in which the comrades of Platform C participated in a meeting with Pierre Laurent and Melenchon of the reformist Front de Gauche (Left Front) party to discuss a candidacy for 2017, without the agreement of the NPA Executive Committee.

Rather than continue fantasizing about the emergence of a “French Podemos”, our party must concern itself with contributing in the here and now to a regrouping of anti-capitalists and revolutionaries on clear strategic bases, for the reconstruction of a far-left with a broad audience and implanting ourselves within the working class — ready for when our class resumes the offensive. That is, to contribute to the construction of a “political representation” not only of the exploited, but one that acts in the interests of the exploited.

For more on the debates within the NPA in France, read: The left of the New Anticapitalist Party (NPA) unites to form Platform A