On September 12 more than 100,000 people marched in London in support of refugees. Tens of thousands took part in similar protests in Belfast, Brighton, Cardiff, Edinburgh, Glasgow, York, Manchester and other cities and towns across the UK. 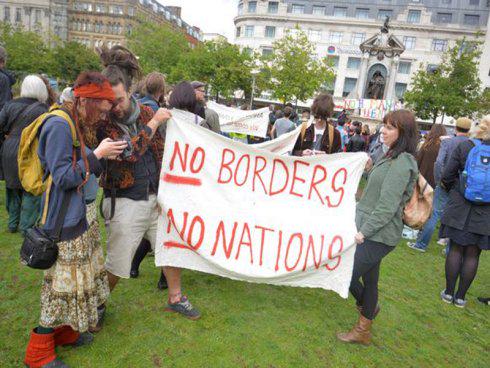 The London assembly point was Marble Arch and by 1pm the whole of Park Lane, which houses some of London’s most expensive hotels, was crowded with protesters. When the organisers invited a contingent of 100 refugees, many of them Syrian, to head the demo, a huge cheer went up from the crowd.

The demonstrators marched through central London to Parliament Square in Westminster carrying placards which read “Refugees welcome” and chanting “Say it loud, say it clear: refugees are welcome here!”

When marchers passed Downing Street – the Prime Minister’s residence – they paused to boo and shout “Dave Cameron, shame on you!” This comes as a no surprise following Cameron’s declaration that the UK would only accept 20,000 Syrian refugees over five years, and his threats to extend bombing by UK aircraft to Islamic State targets in Syria.

Young and old, parents with babies in prams, British people from different ethnic backgrounds and people from many other nationalities came together to express their opposition to the government’s policies as ministers from across the European Union prepare to meet on September 14 to discuss the ‘refugee crisis’.

The overwhelming majority of people on the demo were young, many of them school and university students. In an electric and energised atmosphere – after learning that Jeremy Corbyn had been elected Labour leader – people carried hand-made banners, placards and puppets with messages of support for refugees. There were also many contingents from trade unions, political organisations, migrant support groups and anti-cuts campaigns.

Thousands of leaflets calling for people to attend the protest outside the Tory party conference in Manchester on October 4 were distributed along the route.

A contingent of National Gallery workers handed out a flyer calling for support for the current all-out strike at the art gallery by PCS trade unionists against the outsourcing of their jobs to a private company and the victimisation of their trade union representatives.

One of the most memorable slogans that summed-up the general mood of the marchers read “We are not chasing your benefits we are fleeing your bombs”.