Democrat-Led Cities Are Cracking Down on the Unhoused

Democratic mayors across the country are increasingly attacking the unhoused. Activists are fighting back, and the labor movement can be a key ally. 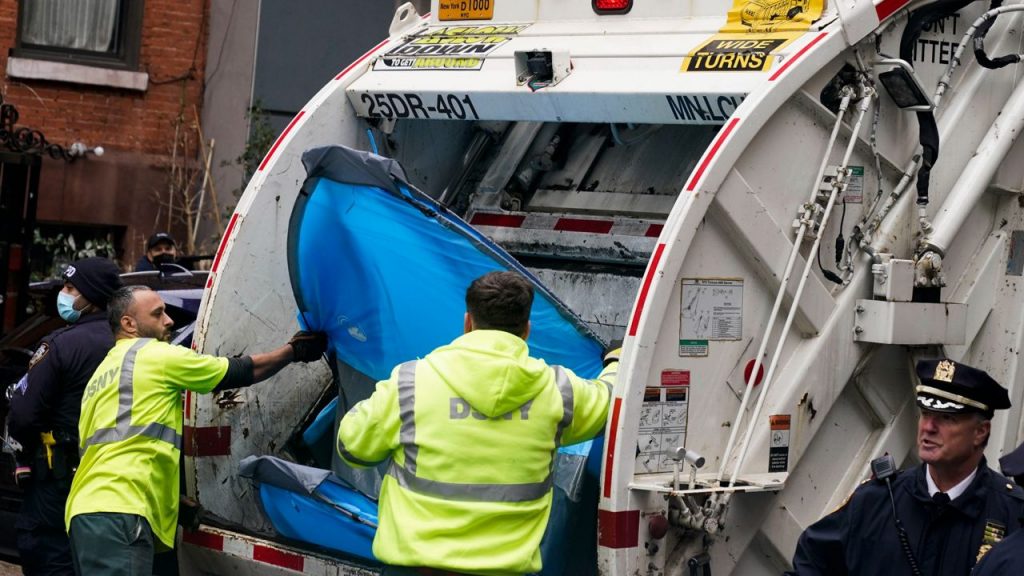 Democratic mayors across the country are stepping up their attacks on the unhoused. New York City is just the most prominent example of ongoing attacks in Portland, Los Angeles, and beyond.

On Wednesday, unhoused activists stood toe to toe with the NYPD, refusing to move. Democratic mayor Eric Adams then gave the order for the police to move in and clear tents and belongings, and to arrest those trying to defend the camps. Over 250 encampments have been destroyed so far. After announcing his planned destruction of encampments, Adams nonchalantly went to a launch party at a club for Wells Fargo’s new credit card aside celebrities like A$AP Rocky and Cara Delevigne.

“This is the right thing to do because there is no freedom or dignity in living in a cardboard box under an overpass,” said Adams. When he was running for mayor, he also called unhoused people a “cancerous sore.” Just after he won, he slashed $615 million from the budget’s homeless services. Now he tries to paint his disgusting actions as being “humane,” as if racist gangs of cops brutalizing those without homes is somehow in their best interest.

The reasons behind these attacks are clear. First, the eviction moratorium has ended, and New York decided to “ease crowding in shelters,” leading to an influx of the unhoused into Manhattan. Adams and other Democrats — such as Governor Kathy Hochul, who’s directing $850 million to a new football stadium while cops evict the poor — are worried the unhoused and their encampments are bad for business and real estate prices. These politicians fear even the sight of unhoused people will hurt tourism, which has taken a major hit due to the pandemic.

And finally, a recession may be on the horizon, with at least one major bank predicting an economic downturn in 2023. That could mean less taxable income in New York, making it all the more important for Democrats to protect businesses’ profits, and cut costs by shutting down houseless services.

In the 2020 election, Democrats ran as the “lesser evil” compared to Donald Trump and the Republicans. But many Democratic politicians spearheaded brutal attacks on BLM in 2020. Like their Republican counterparts, the Democrats have allowed Covid to rip through the population, while President Biden refuses to release vaccine patents and compromise pharmaceutical companies’ profits. Viewed through this lens, Democrats are far from the lesser evil, and their attacks on the unhoused are consistent with their role as a capitalist party, ruling for the benefit of the wealthy.

But unhoused people and their working-class and oppressed allies have fought back — and won. In Philadelphia, another city facing a housing crisis, the Democratic city council opted to protect landlords at the expense of renters while also moving to evict people from emergency Covid housing. In response, activists fought back by creating an encampment — Camp Teddy — in a vacant lot outside the multimillion-dollar headquarters of the Philadelphia Housing Authority and taking over vacant homes, blocking the city’s attempts to evict them.

The wins in Philadelphia came as part of a wider struggle stemming from the BLM Movement as activists expanded demands beyond demanding the defunding of the Philly police to transferring the Philadelphia Housing Authority and the Philadelphia Redevelopment Authority to popular control, and declaring the encampments no-cop zones (similar to what activist did in the CHAZ in Seattle).

In New York City, housing activists are also fighting back, mobilizing against recent evictions. Activists recently published a statement and are organizing a rally on April 8 to demand an immediate end to the sweeps and stable, permanent housing for every unhoused person in NYC.

These fights against evictions must be linked to wider struggles against the police and for housing for all across the United States. In this fight, the labor movement can be a key ally as austerity in city budgets will not only affect the unhoused. Democrats will continue to attack the public sector, targeting unionized workers such as teachers, sanitation workers, and public transit workers. A united movement of workers could fight back not just against these brutal evictions, but against the ongoing decimation of the public sphere by Democratic politicians who merely give lip service to supporting the working class.