On the second night of the July Democratic primary debates, ten presidential hopefuls discussed their proposals for healthcare and immigration in the U.S. Despite fiery rhetoric, all they proved is that no one in the Democratic Party can offer real solutions. 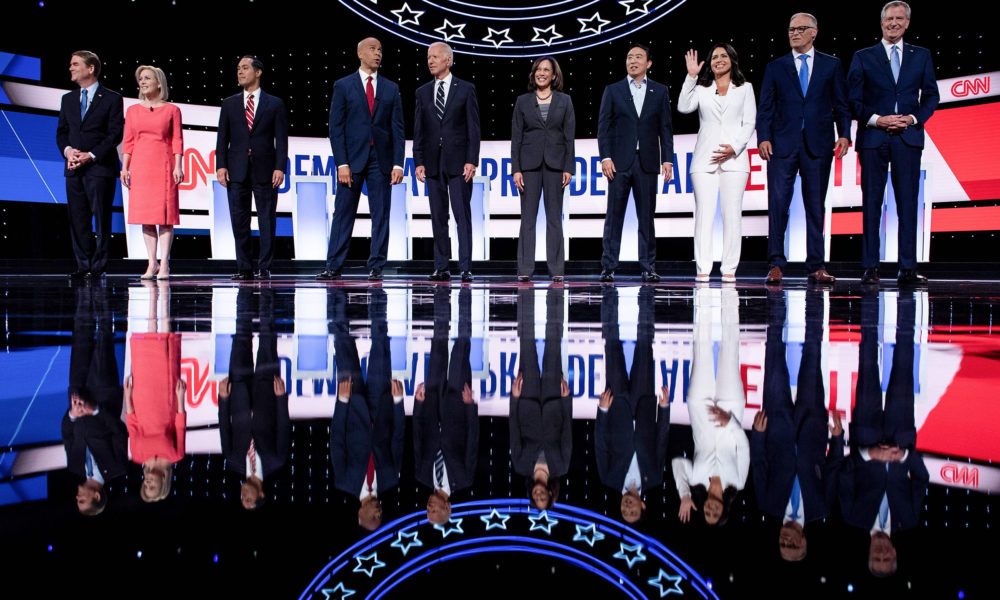 Last Wednesday, the remaining ten candidates in the Democratic Presidential Primary took the debate stage in Detroit. Progressive hopefuls Bernie Sanders and Elizabeth Warren had both been chosen for the first night, so the second night of debates featured current frontrunner Joe Biden, Kamala Harris, and a host of lesser-known candidates. As always, the Democrats failed to offer effective solutions to deep societal problems and failed to show a commitment to even their own stated values. At the end of the day, whatever issues or values the Democrats claim to care about, no Democrat will propose a plan to address social problems if its methods are too disruptive to the status quo.

After the candidates’ opening statements, the debate focused on comparing healthcare plans. Most notably, while candidates differed on their support for a public option, most were careful to express their continued support for private health insurance, ostensibly on the basis of citizens’ right to choose the insurance plan they prefer. What’s worse is that candidates like Kamala Harris spoke fervently about the evils of the system as it is, calling passionately for change, but actually offered the same old solutions. While some candidates like de Blasio and Gillibrand were more critical about private health insurance than others, only Tulsi Gabbard argued that insurance companies, due to their profit motive, are not really interested in keeping people healthy at all.

To be clear: private health insurance exists to profit off of clients. Capitalists make money by offering us the cheapest care possible, while month after month we pay insurance companies in hopes that if we get sick we will be covered. Private health insurance will never prioritize people’s health, even if some people are able to afford quality coverage—which is very few people. Supporting private health insurance is supporting capitalists profiting off of the suffering of the people. The Democrats seem to know the current U.S. healthcare system is flawed, but they refuse to strike at its core.

Immigration was another major topic of the night, though candidates mostly avoided discussing the urgent issue of ICE’s concentration camps. While Julian Castro has been the strongest proponent of decriminalizing crossing the border,  he also suggested a South and Central American version of the Marshall Plan to discourage potential immigrants from coming to the United States. Such a plan would undoubtedly give countries aid with capitalist strings attached, just like the original Marshall Plan, which included generous funding for CIA operations and undermined other countries’ sovereignty, placing them more firmly under the economic control of the U.S. Several candidates favored subjecting illegal immigrants to civil penalties, rather than criminal ones, while others, like Andrew Yang, favored a green card fasttrack for immigrants with PhDs.

The Democrats’ proposals do not meaningfully alter the fundamental structure of the United States’ approach to borders and its relationship with Central America. While the specifics of immigration laws do directly impact people’s lives in major ways, changing the exact nature of the penalty or the rules for who is allowed to immigrate does not change the role of borders in constituting and maintaining US hegemony. Particularly, granting visas to people with particular levels of education only further reinforces the idea that some people “deserve” to be here and others are not worthy.

A common phrase across the candidates’ immigration platforms is “comprehensive immigration reform.” But what does that mean, exactly? Bernie Sanders says he wants to maintain secure borders, restructure but continue the existence of ICE, and ensure a more humane treatment of immigrants while still controlling their rights to move, work, and live. Tulsi Gabbard uses similar language, saying that the U.S. should have “humane immigration policies” with the primary goals of “mak[ing] sure that we are securing our borders and making it so that people are able to use our legal immigration system by reforming those laws.” But telling someone “You are not worthy of being here” is never “humane.”

These plans are the same imperialist policies we have now, but in nicer clothes. Again, we can turn to Gabbard as an example. During the debate, she said that undocumented immigrants should “no longer [be] treated as second class citizens in this country” in the same breath that she said public colleges should be tuition-free to all people except undocumented immigrants. The Democrats are willing to make limited pro-immigrant reforms as long as the U.S. retains its power over those immigrants, and they are willing to make progressive education reforms as long as those reforms only benefit those the U.S. has approved.

Twice during the debate, protestors participated in organized chants until security removed them. The first chant demanded that Bill deBlasio “Fire Pantaleo,” the NYPD officer who killed Eric Garner. The second chant began while Joe Biden was speaking; protestors repeated the statistic of the “3 million deportations” conducted during the Obama/Biden administration. Biden waited until the chanting stopped before continuing his speech, never addressing the issue.

When a moderator asked de Blasio about Pantaleo, he refused to explain why he has not personally fired Pantaleo, making vague promises about Garner’s family receiving their due justice “within the next 30 days.”  In fact, he did not address the fact that he has the ability to fire Pantaleo at all—a dodge that significantly undermines his other attempts at progressive signaling throughout the debate.

Although clearly uncomfortable with the moderator forcing him to address the concerns of the protesters, de Blasio readily turned the same tactic on Biden, asking him if he had ever stood up to President Obama on the issue of immigration. Biden refused outright to answer, claiming it would be inappropriate and disrespectful to divulge details of his private conversations with Obama. Biden also refused to give a straight answer when Kirsten Gillibrand asked him about his support for the Hyde Amendment and the op-ed he wrote in 1981 claiming that mothers working outside the home are contributing to the “deterioration” of the family.

Of the lesser-known candidates, two that have not received much attention but stood out during the debate were Andrew Yang and Governor Jay Inslee.

Yang seems to agree with many of the premises that underlie social democratic politics, yet he consistently draws the wrong, or even opposite, conclusions from them. He agrees that people ought to be guaranteed a certain standard of living just by virtue of being human, but his method of delivery (universal basic income) is ineffectual within capitalism and his proposed level of funding is laughable. He agrees that prison is a waste of taxpayer money, but his solution is to pay people to stay out of prison, rather than to abolish prison entirely. He agrees that automation will eliminate the need for humans to do many jobs, yet he frames it as a danger to our way of life rather than as an innovation that could free humans from hours of labor; furthermore, he proposes no solutions that will fundamentally restructure the workings of society to respond to that change. Universal basic income is his simple answer to every social problem, without regard for the actual conditions of the society that causes those problems.

Above all, Yang repeatedly glorifies business and proposes capitalist solutions to the problems of capitalism that he himself acknowledges. The U.S. should value immigrants because they create businesses. People should receive $1,000 per month so they can create businesses. Capitalists like Andrew Yang cannot support possibilities outside of money and more capital without acting against their own interests—but that does not mean voters have to accept such limited fixes to our shared problems. We do not need to be beholden to capital. We can envision other, better solutions.

While Governor Jay Inslee of Washington lacks widespread name-recognition or support, he stuck to his main message of climate change as the single most important issue in his campaign, because it affects all other issues. While candidates like Harris and Gillibrand favor the Green New Deal, Inslee argued that much more drastic action is necessary and that action needs to be faster and nationally mandatory, whereas the Green New Deal provides guidelines and goals but mandates no action from anyone. Yang pessimistically agreed, saying that we are already 10 years too late to do anything about climate change.

Unfortunately, Inslee failed to explain exactly how he proposes to address climate change. Inslee tends more toward the reformist capitalism stance of Elizabeth Warren than even the social democratic stance of Sanders and AOC, so it seems unlikely that any steps he would take toward fighting climate change would be sufficient. It is impossible to fight climate change without fighting capitalism. Inslee also mentioned his support for increased attention to mental healthcare and readily admitted that his statewide public option for health insurance was nowhere near adequate.

Throughout the debate, Senator Cory Booker repeatedly insisted that quibbling with each other over minor details was playing right into Donald Trump’s hands. On the one hand, this shows that Booker tried to avoid the intended purpose of primary debates—to establish the differences between candidates in order for viewers to make an informed decision about who they wish to vote for. On the other hand, he is right that none of the candidates offer an alternative to the Trump administration, or to the ongoing suffering of the working class and other oppressed groups in the United States. As far as the working class is concerned, the candidates are quibbling with each other over minor details that may improve quality of life in minor ways but will nonetheless perpetuate our current system of oppression and suffering.

The candidates courted controversy only in measured ways. Time and time again, they showcased their hypocrisy and morally-compromised nature, failing to take strong stances or follow through on their stated values. These moral and strategic contradictions stem from the Democratic Party’s relationship with capital; it is impossible to truly address the problems of healthcare, immigration, climate change, racism, and the rest without addressing (and dismantling) capitalism itself. Democrats are unwilling to do that, and so they will always fall short of what the working class needs.