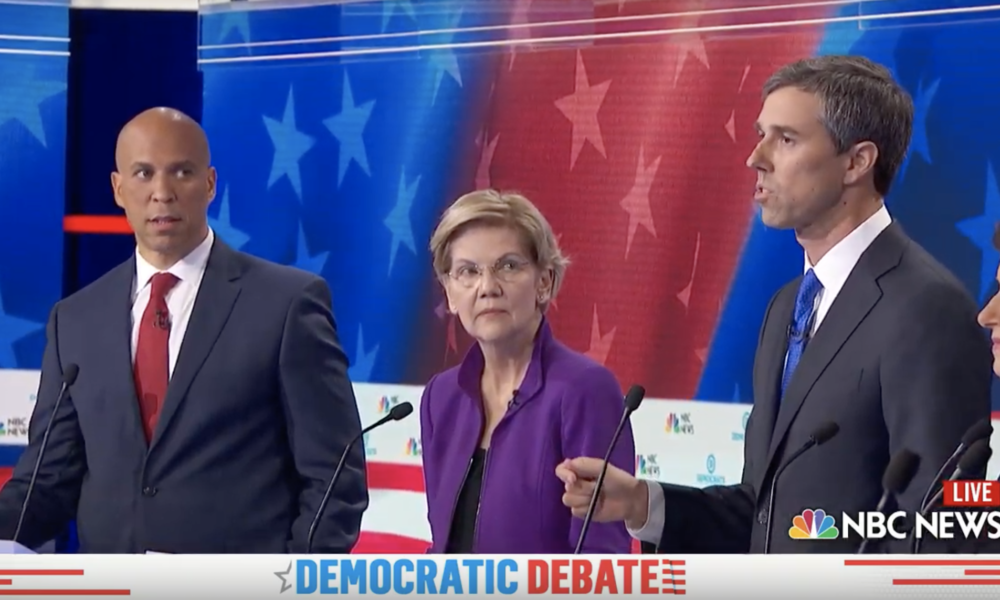 Donald Trump is keeping his campaign promises. The inhumane conditions in concentration camps and the deaths at the Southern border are his tour de force. In the midst of this historic border crisis and increased government hostility towards immigrants and Latinx people, Latinx voters are being heavily courted this election cycle. This courtship was in full force June 26th, the first night of the televised Democratic Presidential debates.

The debates, which were hosted in Miami—only a 45-minute drive from the nearest migrant detention center—placed immigration and Latinx voters front and center amongst the many topics discussed during the night. Just the day before, the heart-wrenching photo of the dead bodies of Óscar Alberto Martínez Ramírez and his daughter Valeria, still hugging her father’s neck, circulated in the media.

Many of the candidates expressed outrage at the photograph during the debate. Presidential candidate Bill DeBlasio said, “That tragic photo of that parent and that child…every American should feel that in their heart. Every American should say those are not our values.”

“We would not turn back Valeria and her father Óscar,” candidate Beto O’Rourke said. “We would accept them into this country and follow our own asylum laws. We would not build walls. We would not put kids in cages.”

Not content with such statements of sympathy, however, candidates Cory Booker, Julian Castro and Beto O’Rourke even (attempted) to speak Spanish during the night.

Some of the candidates went even further, promising that their health care bills will cover undocumented immigrants, or even decriminalizing crossing the border without papers- as Julian Castro proposed.

This gesture comes as no surprise. In addition to kissing babies, another tried-and-true tradition of election season is attempting to speak to and about the issues affecting the most oppressed sectors of society. Politicians appear once every four years and make sure to mention undocumented immigrants, trans women and the Black community- only to ignore them again post-elections.

Notably, no candidate that night suggested the abolishment of ICE, the government department responsible for detaining and deporting immigrants. Some sectors of the Democratic Party had previously taken this up, although they proposed another repressive mechanism to deport and detain. Still, it is indicative that even this minimal promise was nowhere to be found in the debate.

And yet, the following morning after the first round of debates ended, the Democratic-led House passed a $4.6 billion bill funding emergency humanitarian aid at the southern border on June 27th—129 Democrats in favor, 95 opposed. Among its various applications is more funding for ICE.

It is no wonder that the Democrats are addressing these issues. On one hand, Latinxs are likely to be the largest non-white group to vote in the 2020 elections. In 2016, they played a decisive role in Clinton’s loss in Florida. On the other hand, beyond the Latinx vote, progressives are horrified by the concentration camps run by the United States; there has been widespread public outrage at the reports and images of children kept separate from their parents, detained in egregious conditions where they sleep on the floor with nothing but aluminum blankets.  While the Trump administration says that children do not need toothbrushes or soap, large sectors of the country are now looking to the Democrats for answers.

For its part, the Democratic Party is more than happy to position itself as the answer to this crisis. It bets on the American voter having a short-term memory and forgetting that Obama deported more people than any other President, including Donald Trump. The Democrats hope that we will forget that one of the first widely shared images of children in cages was not taken during the Trump administration, but during Obama’s presidency in 2014.

The current wave of immigration into the US, as in the past, is a direct result of US imperialist policies championed by the Democratic Party, which held power for 8 of the past 10 years. Perhaps the clearest example is the Obama administration’s support for the 2009 coup in Honduras that ousted a democratically-elected president and brought to power a US ally that imposed austerity measures on the working class and created a disastrous economic and political crisis.  Before Obama, it was the former Democratic Party favorite Bill Clinton who proposed economic imperialist policies, leading to mass migration from Mexico to the US by signing NAFTA into law in 1993. They allowed the free passage of goods and criminalized the passage of people.

Despite attempts to shy away from the current administration’s rhetoric, the Democratic Party is comparable to it in practice. After all, both Democrats and Republicans are funded by the same American capitalist class that profits from imperialism, and their policy decisions reflect this relationship clearly.

This is why the Hispandering during Wednesday night’s debate was particularly hypocritical: the Democrats think they can buy Latinx votes with some Duolingo Spanish while at the same time voting for more funding for the very agents responsible for separations and deportations.

This performative “wokeness” shields the Democratic Party candidates from having to put forward substantive proposals which address the root of the migration crisis and abuses against immigrants. Such proposals would need to include a policy to not only abolish ICE, which none of the candidates proposed either night, but of opening the borders and allowing the free passage of people. It would mean providing full citizenship for all those who enter the country, including Medicare for All and free higher education.

More than this, however, being on the side of Latinxs also means addressing the reasons that Latin Americans are out of their homes, their lands and their countries, such as free trade agreements that destroy local agriculture and domestic production, depriving millions of people from their livelihood. Proposals that support Latin America should ensure  that those who choose to remain in their home countries  are not faced with US coups changing their governments and interfering in their elections or having US corporations exploit workers and natural resources. Being on the side of Latinxs means getting the US out of South and Central America.

Of course, no Democratic Party candidate will put forward these proposals, much less carry them out while in office. Imperialism and the second-class status of undocumented immigrants is central to the functioning of American capitalism—And as the Democrats have made clear, they are a capitalist party.

The crisis of children being held in concentration camps and families drowning at the border cannot be resolved by Democrats speaking “en Espanol.” To borrow a phrase from Julian Castro, their Hispandering should piss us all off.