On Saturday in Paris, several thousand demonstrators answered the call of various political and trade union organizations to demonstrate against layoffs. Grandpuits refinery workers were there, along with workers from the travel giant TUI, industrial machinery maker SKF, the agribusiness giant Cargill, and General Electric. It was the first such coordinated action by different sectors all confronted with layoffs, with more to come. 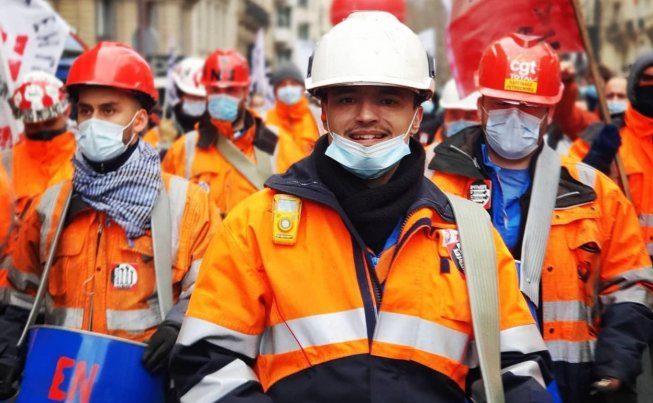 More than 2,000 French workers demonstrated against layoffs on Saturday in Paris. They are on the move against the social plans known as PSEs, which allow companies with at least 50 employees, and that plan to lay off at least 10 of them over the same 30-day period, to negotiate covering minimal social costs with their unions. French unions have typically agreed to negotiations rather than fight the job losses.

“A few weeks ago, we realized that to defeat these PSEs, we had to get together,” Lazare Razkallah told Révolution Permanente on Saturday. “So we contacted workers at Cargill, Auchan [a major retailer], the Grandpuits refinery” and so on. Razkallah, a delegate of the CGT trade union confederation at TUI France, the giant tourism company, was talking about the initiative behind the day’s demonstration in Paris demanding a prohibition on layoffs and job cuts. Protesters began at the National Assembly, made their way through the streets of the city’s 7th arrondissement (district), marched past the Ministry of Labor, and ended at the headquarters of MEDEF, France’s largest employer federation.

All told, more than 2,000 demonstrators answered the call. Notable among them were striking refinery workers from Grandpuits, some 20 of whom made the trip to Paris and marched in their uniforms with their now-famous oil barrel drums. Alongside them were other workers from companies facing layoffs, including Nokia, Cargill, and Sanofi. Workers from the SKF ball-bearing plant in Avallon marched, too; like the Grandpuits workers, they have also gone out on strike against the attempt by the bosses to impose a social plan and destroy their jobs.

“We are on permanent strike,” declared Lhoussaine Amchi, an SKF delegate of the Force Ouvrière (FO) trade union confederation. “We are in the fight. Today, the fight against layoffs is going to be a difficult struggle against the employers, and we are going to have to lead it all together.”

Politicians also answered the call, including Olivier Besancenot of the New Anticapitalist Party, Jean-Luc Mélenchon of the social-democratic party La France Insoumise, and others from the French Communist Party.

Although not all the workers present are on strike, many demonstrators highlighted the need for coordination as a lever in the fight against layoffs. Others denounced the passive approach generally adopted by the trade union leaderships. Gaëtan Gracia, a CGT activist and member of the Collectif Aéro, a coalition of aerospace sector workers, declared, “The trade union leaderships are leaving us little to face an onslaught. We’ve been waiting for a long time, but there’s been nothing … no consistent battle plan.”

The lack of a coordinated battle plan explains why the unionists at so many companies opt for negotiations over layoffs instead of testing their power. It is that very logic that the demonstrators in Paris are determined to beat back.

Michaël Wamen, a leader of the struggle at the Goodyear tire company, told Révolution Permanente, “I’m not at all happy to see what happened at Bridgestone in Béthune, which signed an agreement and congratulated itself for ‘not burning any tires.’ There are no bonuses, no PSEs, that are worth our jobs. Wherever the bosses want to lay people off, we have to stand up and be counted.”

“Don’t fall into the trap of social dialogue,” declared Adrien Cornet of the Grandpuits CGT. “Take to the streets! Go on strike! Occupy your factories! They understand only the relationship of forces!”

In short, this first coordinated demonstration was an important point of support to advance in building a united front against the layoffs. It showed the will to fight across different sectors, despite the passivity of the union leaderships. What must happen next is to continue the work, coordinate the sectors on strike, and highlight the need to fight not only against job cuts but also for a national ban on all layoffs — a demand that can be imposed only through a very broad struggle.

The prospect of such a movement emerging is what the French government fears more than anything else. As Le Monde noted on Friday, January 22, the government is worried that “anger is gathering momentum” and will lead to a “social spring” — meaning a working-class uprising. That fear was embodied quite concretely on Saturday, with a massive police force deployed to oversee the march and try to nip the protest in the bud. The cop’s presence poses a larger question of a broader movement that begins with the struggle against layoffs but also raises the issues of repression and police violence in concert with the mobilizations against the Global Security Law.

First published in French on January 23 in Révolution Permanente.