Despite Coronavirus, the Class Struggle Continues

As the pandemic spreads, politicians of the ruling class are calling for unity — and they are trying to use the crisis to make billions. As revolutionary socialists, we reject the idea that there can be unity between exploiter and exploited. Workers need to fight against the crisis with our own methods. 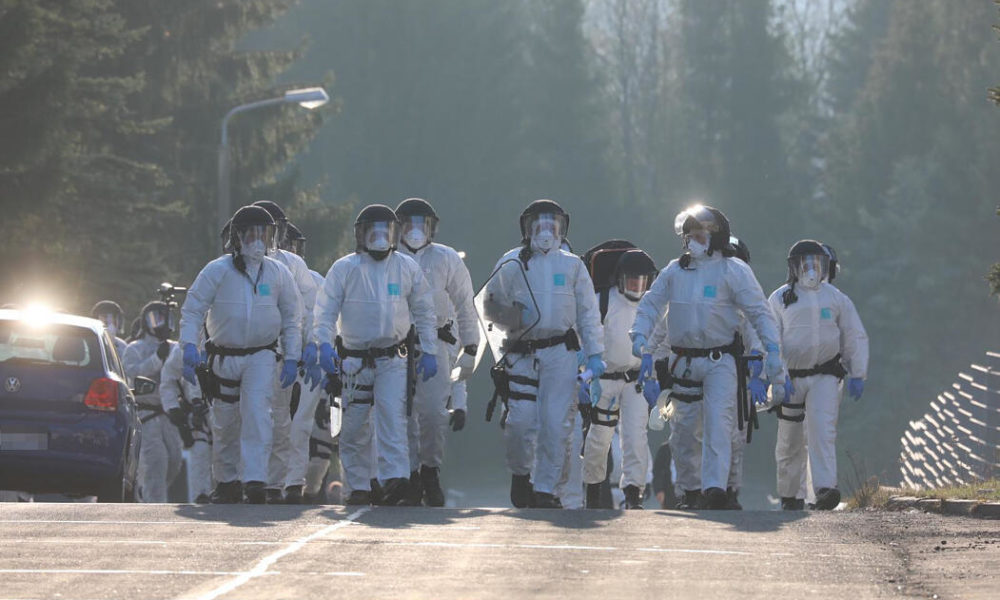 Just over 100 years ago, the so-called Spanish Flu killed 50 to 100 million people around the world. The flu was not from Spain — it likely originated in the United States. But the virus spread at a time when most countries were censoring their press because of World War I, and so the first reports of the new influenza strain came out of neutral Spain.

The flu’s devastation was no mere biological crisis. The high death toll was a direct continuation of the horrors of the war. Troops being sent around the world spread the disease, with exhausted soldiers hunkering down in trenches particularly susceptible. But the most deaths occurred in the colonized world. In Iran and India, requisitioning and mismanagement by the colonial powers had already led to famine, so the virus hit a severely weakened population.

At the outbreak of the war in 1914, leaders of the workers’ movement had called for a “civic peace.” The idea was that workers should suspend all forms of class struggle in the name of the “national interest.” And as soon as their individual nation was victorious, so the logic went, workers would get a piece of the spoils.

In Germany, this policy was referred to as a Burgfrieden — literally, a “castle peace” that reigns within the walls of a besieged castle. In France, it was the union sacrée, the sacred union. In all cases, it meant a pause in the class struggle.

World War I brought enormous profits to the big capitalists, the banks, the stockholders, and the speculators. But it only brought starvation and misery to the working class. This applied even to the workers in the victorious countries. No wonder that in the years following the war, there were massive revolutionary movements around the world.

Now, in the face of a similar crisis, we are hearing echoes of this “civic peace.” Ruling-class politicians want the working class to unite with the very people responsible for this crisis. Joe Biden and Nancy Pelosi, supposedly the opposition and sometimes even touted as the “resistance” to the incompetent Trump government, are calling for “Unity, Unity, Unity.”

But while capitalist politicians call for a pause in the class struggle, are the capitalists actually pausing? No.

We see this in the “rescue packages” presented by capitalist governments. For years, they said there was no money to provide healthcare or education for working people. All of a sudden, the United States seems to have a trillion dollars to save the economy.

When they talk about “saving the economy,” however, they really mean propping up large banks and corporations. Since large U.S. corporations pay little or no taxes, this means tax money paid by working people. The trillion dollar package is nothing but a massive transfer of wealth from working people to the capitalists in the face of the crisis.

Is that not a form of class struggle?

Capitalist governments are using the coronavirus as an excuse to grant themselves unprecedented powers for surveillance and repression. They claim this is to fight the pandemic — but it will not be long before they use these same powers to stop demonstrations and strikes.

The most egregious example comes from the post-fascist president of Chile, billionaire Sebastian Piñera. For months, he has been looking for ways to criminalize the massive protests that have been rocking the country. Faced with the coronavirus, he originally dismissed it, Trump-style, as nothing more than a flu. But then he sensed an opportunity, and now he is calling for bans on demonstrations — as a supposed public health measure! Meanwhile, he does nothing to improve the dire state of Chile’s privatized healthcare system.

In the manufacturing sector, the capitalists have attempted to keep workers in factories, making non-essential goods and risking their lives for others’ profits. Strikes in Italy, the Basque Country, and in the United States  have shut down a number of plants.

Many workers cannot work from home. This is particularly true of nurses, doctors, and all healthcare workers. Around the world, they are working grueling shifts under the direction of capitalist management. And here, we see additional forms of class struggle.

Currently, healthcare workers are being forced to ignore established safety precautions. They are told to work without protective gear, since none is available. They are working ridiculously long shifts due to a lack of personnel. But the crisis in hospitals did not fall from the sky. It is a result of decades of neoliberal policies by managers and politicians — the same people now calling on workers to sacrifice!

Most healthcare workers are not complaining. Instead, the crisis highlights the fundamental solidarity of working people. Healthcare workers today are the precious leaven of humankind. They are not going on strike despite the terrible conditions to which they are being subjected — conditions that were already intolerable before the pandemic.

To beat the virus, workers need to take control of their workplaces. This applies to hospitals, but also to factories of all kinds that can be repurposed to manufacture supplies to fight the crisis. The capitalist owners and managers have brought society to the brink of catastrophe — why should these experts in exploitation be in charge in a public health emergency? Workers need to kick out the capitalist managers and owners — or better yet, put them to work doing something useful, like disinfecting. We need committees elected by workers and experts to coordinate our answer to the crisis.

As revolutionary socialists, we are not opposed to placing society on a war footing. We are very much in favor. In fact, we want an even greater mobilization than in a war. War is about one nation-state mobilizing against another. But we want all of humanity to join in a monumental effort to stop a common enemy. What we need is more like the response to an invasion from outer space.

But that kind of war-like mobilization cannot be left in the hands of the parasites and malignant halfwits who run capitalist states. Trump talks about being a “war president,” but his focus on maintaining capitalist profits is sabotaging the supposed war effort at every step. It is not just a problem of simpletons like Trump and his lackeys. Even in China, which had a huge campaign against the virus, we saw how the ruling bureaucrats, to maintain their prestige, repeatedly sabotaged the heroic efforts of working people with lies and censorship.

It is the workers ourselves who can best control the kind of mobilization we need. We reject any kind of “civic peace” during the crisis. A war-like mobilization against the coronavirus requires a simultaneous fight for the power of the working class over all aspects of society. In other words, we need to combine the war against corona with a war against the capitalists. This is exactly what workers did 100 years ago to fight against the horrors of World War I and the Spanish Flu: they responded to capitalist barbarism with revolutionary uprisings across the globe.