Seen from a distance, Die LINKE might seem pretty cool: A party that opposes war, capitalism, and all border controls gets up to 10 percent in national elections. But it is also a government party, and has applied racist and neoliberal policies since its founding. What would Rosa Luxemburg say? 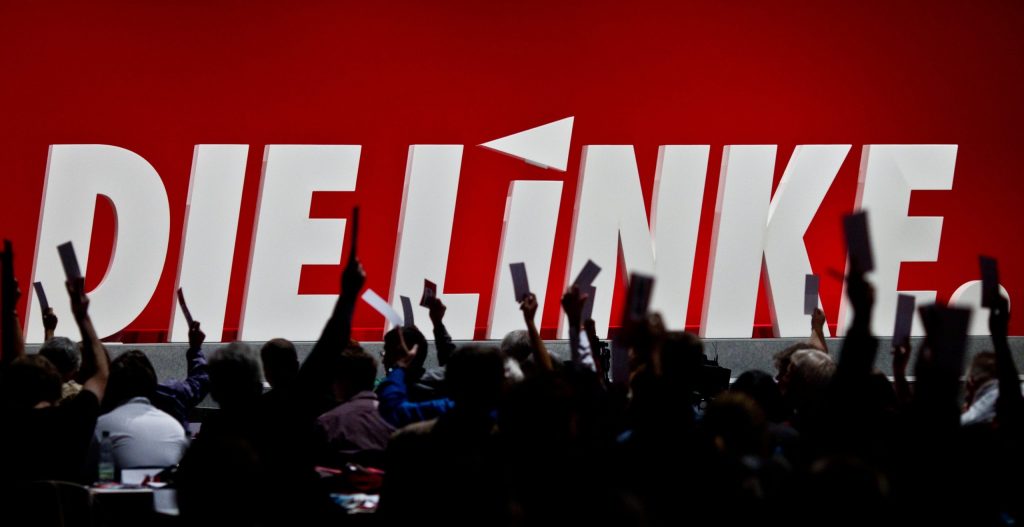 Seen from a distance, Germany’s Left Party — which refers to itself, rather arrogantly, as Die LINKE or “The Left” — might seem pretty cool. A party that opposes war, capitalism, and all border controls gets around 10 percent in national elections — what’s not to like?

Die LINKE held its party congress on the last weekend of February. It elected a new leadership duo: the former Trotskyist Janine Wissler, known for her criticism  of the party joining government coalitions, and Susanne Hennig-Wellsow, who is part of such a government coalition in the state of Thuringia.

After several years of stagnation, the party is hoping for an #Aufbruch, which could be translated as a take off or a break out. Loren Balhorn, writing in Jacobin, has provided many important insights for English-speakers about the party’s history and dynamics. (Jacobin’s German edition has published several more analyses of the congress.)

As Balhorn points out, Die LINKE does not have a mass working-class base. Among the party’s 60,000 members, many work in Germany’s enormous political superstructure: elected officials, parliamentary assistants, party apparatchiks, employees of associated foundations, etc.  One estimate says that 70 percent of the newly elected party leadership, which calls itself the “Movement Left,” work for their party. Another important sector consists of low- and mid-level functionaries for Germany’s sprawling trade union bureaucracies.

But across all analyses of the Left Party, one aspect is conspicuously absent: Die LINKE is, and has always been, a government party. In Germany’s hyper-federalized system, most parties are integrated into government at some level: communal, state, or national.

The Left Party is currently in government in three of Germany’s 16 states:

(It was also part of the government of Brandenburg until 2019 — and has previously been in government in Mecklenburg-Vorpommern.)

What does it look like when the Left is in government? We can look at different numbers. In Germany, the states are responsible for carrying out deportations. And statistics show that left-wing governments deport just as many people as conservative ones do. Die LINKE is responsible for roughly 2,000 deportations every year. The “left” prime minister of Thuringia, Bodo Ramelow, declared a winter moratorium on deportations for several months in 2014. He thus proved in practice that a state government can stop deportations, at any time and indefinitely, if it wants to. If Die LINKE is carrying out deportations, it is because they want to.

What about the public sector? In 2001, Berlin lost almost €40 billion due to speculation by criminal bankers. It was a government made up of the SPD and the PDS (forerunner of Die LINKE) that was responsible for implementing austerity. The city’s “left-wing” Economics Senator Harald Wolf1Senator is the term for a minister in the Berlin state government. played a central role in cutting public-sector wages by 10 percent. He imposed outsourcing in publicly-owned companies, which means that thousands of Berlin workers in hospitals, museums, or public transport are now excluded from union contracts. Wolf and the “red-red” coalition also privatized almost 200,000 publicly owned apartments.

One could say: this is all ancient history — Die LINKE has changed since the early 2000s! But the effects of these policies live on. The privatization of public housing led to an explosion of rents, and hospital workers are still fighting for equal pay for equal work. Wages in public transport remain far below the national average, leading to further strikes. In other words, while the “red-red-green” government has promised some improvements, the working class in the city is still far behind where it was before “The Left” came to power.

Thus, when Rampant magazine reports that the Left Party in Berlin is campaigning for the expropriation of big landlords, this is at best a very small part of the picture. Yes, some members of Die LINKE are supporting a campaign that might, if successful, reverse the damage done by their party. The same could be said about the city’s rent cap, which has offered some partial relief to the city’s workers. This could be seen as a progressive accomplishment by Die LINKE — or as an attempt to take the wind out of the sails of the demand for expropriation, and simultaneously get their party reelected.

One could continue this list indefinitely. Berlin’s “left-wing” government is also trying to privatize public transport. In the middle of a pandemic, a number of left-wing projects have been evicted. Thousands of police descend to make room for realty speculators. The queer-feminist house project Liebig34 was destroyed, as were the anarchist bars Syndikat and Meuterei. Each time, a few Die LINKE politicians will put out slightly surreal press releases: “we are opposed to this,” they will say, “someone with political influence should really do something!” Apparently they hope that no one will remember who is in government. As the Berliner Zeitung reports, Berlin has far more evictions than any other state (even though the official statistics are spotty).

This was once dismissed as an East German problem. People said that only in the former German Democratic Republic, where Die LINKE emerged from the former Stalinist ruling party, would the party implement neoliberal policies like this; in the West, where Die LINKE is smaller and further from the halls of power, they would remain in opposition. Except: in 2019, the Left Party joined the government in the Western city-state of Bremen. A left-wing health senator is organizing mass layoffs at public hospitals.

The different wings of Die LINKE are engaged in complex internal battles but are unanimously  in favor of Die LINKE joining coalition governments alongside the SPD and the Greens.2A partial exception is the Anticapitalist Left or AKL, which has one seat in the party’s 44-member leadership body, down from two at the last congress. No one is calling on Die LINKE to leave existing government coalitions. The recent party congress actually decided by a majority vote to reject any deportations by state governments — however party’s ministers continued deportations the very next day. Since the #Aufbruch, they have likely deported several hundred people.

To give a brief overview of the three main wings:

This superficial overview is of course missing plenty of sub-wings, groups, tendencies… In addition, a large part of the revolutionary socialist Left in Germany has been swallowed up by this government party. Yet these revolutionaries have not had much effect: the fundamental orientation to joining bourgeois governments is hegemonic. Even the new party chair, Janine Wissler, formerly of the post-Trotskyist network Marx21, when asked if she is in favor of governments alongside SPD and Greens, says “of course we want to govern.”

When Wisslers speaks in favor of joining the government, this is supposedly just a tactic: voters would not understand a fundamental opposition to bourgeois governments along the lines of Rosa Luxemburg, so one has to negotiate with SPD and Greens in such a way that they reject coalition. That is, at least, the rather dubious justification offered by Marx21. But Die LINKE’s numerous ministers are taking Wissler at her word: a government party’s congress elected her co-chair with 84 percent of votes, and she has taken no steps that would disrupt the party’s three government coalitions.

So when Loren Balhorn writes that Die LINKE lacks a strategy, this isn’t quite true. The party has a long-established strategy: entering bourgeois coalition governments and trying to pass reforms. The results are on full display for decades: deportations, evictions, repression, privatization, union busting. And all the party’s main wings agree that this should be continued in a national government. The only thing they disagree on is the right discourse to get there.

Compare that to Rosa Luxemburg. She wrote that the role of a socialist party, “in bourgeois society, is essentially that of an opposition party. It can only enter on scene as a government party on the ruins of bourgeois society.” Luxemburg’s name is celebrated by Die LINKE — but basically no one in the party defends Luxemburg’s positions.

Die LINKE does not lack a strategy — all it lacks is any kind of strategy for overcoming capitalism or winning socialism. Klasse Gegen Klasse, the German sister site of Left Voice, is campaigning for the socialist Left to reject the policies of the “lesser evil” and build up a revolutionary pole independent of the government socialists. Such a pole would need to rely on joint mobilizations and the construction of revolutionary fractions in the trade unions to build up influence in the masses — without positioning themselves under the banner of a reformist apparatus.

Die LINKE has not been successful as a socialist party, but it has been very successful at integrating socialists into the German state. Alas, independence from this imperialist state is an essential condition of fighting for the interests of working-class and oppressed people, both in Germany and around the world.