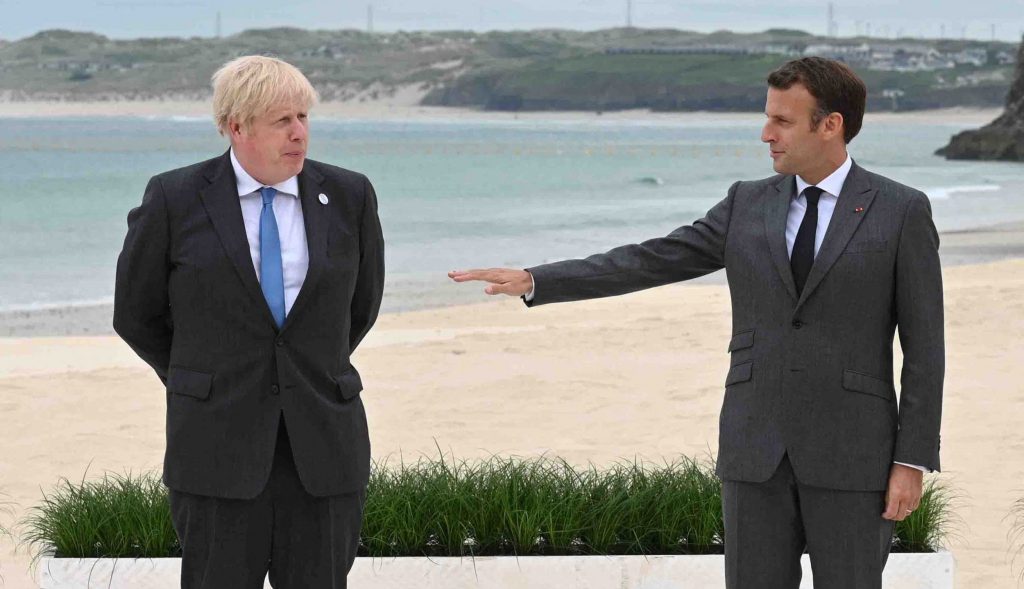 On Wednesday, November 24, at least 27 migrants drowned off the French coast when their boat sank in the English Channel. The boat had left from Calais to cross the English Channel with nearly 50 people on board. With the tragedy still fresh, the disaster quickly turned into a political confrontation.

Since Thursday, tensions between Paris and London have been rising. In a letter addressed to French president Emmanuel Macron published on Twitter, British prime minister Boris Johnson called for a “bilateral readmissions agreement to allow all illegal migrants who cross the Channel to be returned.”

The French government’s answer was not long in coming. Minister of the Interior Gérald Darmanin was first to respond in a message addressed to Priti Patel, the British Secretary of State for the Interior, calling Johnson’s letter a “disappointment” and adding that the letter was “mediocre in terms of the content, and wholly inappropriate as regards the form.” Macron himself then weighed in, criticizing his British counterpart for “methods [that are] not serious” and then insisting, “We do not communicate from one leader to another on these issues through tweets and letters that we make public. We are not whistleblowers.”

The result was that on Friday morning France revoked Patel’s invitation to attend a multilateral meeting on Sunday to discuss the migrant issue. “We consider the British Prime Minister’s public letter to be unacceptable and contrary to our discussions among counterparts. Therefore, Priti Patel is no longer invited to Sunday’s inter-ministerial meeting, which will still include France, Belgium, Netherlands, Germany, and the European Commission.”

A Backdrop of Xenophobic, Anti-Migrant One-Upmanship

Under the 2004 Treaty of Le Touquet between France and the United Kingdom, the British border is fixed on the French coast.1Translator’s note: The treaty allows British immigration officials to conduct border checks in northern France and at the Gare du Nord in Paris (the train station at which the train that goes through the Eurotunnel originates), rather than waiting until people arrive in Dover, where the tunnel emerges onto English land. However, since Brexit, tensions around this agreement have intensified. As Franceinfo notes: “Since Brexit, the fight against immigration has been a priority of the British government, which wants fewer holes in the net. It views France as too lax, and London has been applying constant pressure. Priti Patel … has, for example, threatened to turn away the boats of illegal migrants at sea, escorting them with jet skis back to the French coast — a practice that is in violation of maritime law.”

Underlying it all, according to Paris, is that the British government has set up France as a scapegoat to deal with public opinion at home regarding Brexit’s failure to achieve its xenophobic “border control” promises. As the Economist noted, “The drownings highlighted the human cost of what had up until then been discussed in terms of crude electoral calculus.”

The latest turn in the diplomatic crisis is Britain’s aim to find an agreement for returning migrants who have already made it to the British Isles, particularly to France. The hope is that the prospect of immediate deportation to the European country of departure will make migrants find Britain a less-attractive destination.

The British proposal was immediately brushed aside by Gabriel Attal, Macron’s spokesperson, on BFM-TV Friday morning:

Obviously, this is not what we need to solve this problem. What we need is for the British to send us protection officers to examine asylum applications that are coming from people who are in France. … You have to wonder now whether Boris Johnson isn’t regretting having left Europe [with Brexit], because as soon as he has a problem, he decides that it’s up to Europe to manage it! [He] considers that it’s up to Europe to manage it! … That’s not how it works. It’s about cooperation.

The challenge for the French government, in turn, is to impose strong migration policies, writes Le Monde.

Five months before the French presidential election, in a pre-campaign climate marked by a lot of far Right themes, Emmanuel Macron is well aware of the migrant issue. On Thursday morning, November 25, an urgent cabinet meeting was organized at Matignon. Prime Minister Jean Castex met in a videoconference with various ministers, including Gérald Darmanin, Minister of Justice Eric Dupond-Moretti, and Minister for Europe and Foreign Affairs Jean-Yves Le Drian, and Secretary of State for Europe and Foreign Affairs Clément Beaune.2Translator’s note: The Hôtel de Matignon is the official residence of the French prime minister.

For Macron, this entire affair is all about showing that Europe, far from being the “migratory sieve” as its detractors claim, is capable of maintaining control of its borders. And this is in line with a reform of the Schengen Area,3Translator’s note: The Schengen Agreement, signed on June 14, 1985, began the process of most European countries abolishing checks at their national borders and thus allowing for free movement between those countries. which the French president wants to carry out beginning on January 1 when France assumes the presidency of the European Union. The reform aims to strengthen controls at the borders of European Union member states, especially with random checks. On Thursday in Zagreb, Macron spoke of an “ethical tension” between “our capacity to welcome and the protection of who we are” and declared, “If we do not protect our national integrity, we risk fueling very harsh nationalisms, phenomena that Europe has thus far tamed.”

On top of the migrant issue, French fishermen on Friday began to block ports and access to freight from the Channel Tunnel as they demand a solution to post-Brexit fishing disputes. It is a highly symbolic action given current events and the deep tensions between Paris and London since Brexit. Interviewed by Le Monde, noted journalist Cécile Ducourtieux explains:

The crisis is indeed explained by Brexit, which is slowly poisoning relations between Paris and London. The position Emmanuel Macron adopted in the Brexit negotiations was in line with the rest of the Europeans, but firmer. Brexiters viewed it as hostile, and believe Paris is doing everything it can to make Brexit fail. Boris Johnson has not hesitated to use the differences with France for his domestic political ends, and there’s a healthy component of the Conservatives who love a good dispute with the French. History and the persistent prejudices between our two countries are never far away (perfidious Albion on one side; President Napoleon on the other; and so on). Paris seems convinced that London is only holding back licenses for French fishermen to keep the quarrel going. Paris tends to downplay the difficulties Brexit has created in Northern Ireland. The Aukus submarine deal between Australia, the United Kingdom, and the United States, which was traumatic for Paris, has made the relationship even more toxic.

The tone between the two powers was already heated in October. Clément Beaune told CNews then, quite eloquently, “Now we must speak the language of force, because I fear, unfortunately, that it is all the British government understands.”

Once again, the verbal escalation between London and Paris, beyond the indecency of this diplomatic crisis against the backdrop of a human tragedy, is all in the name of defending patriotic interests. What is clear is that this is not our fight. The militarization of our borders, as shown by Wednesday’s drownings, is murderous. In opposition to these criminal policies and rampant xenophobia, workers in Britain and France must join forces against the reactionary measures of their own decaying imperialisms. This means immediate papers for all undocumented migrants, closing the administrative detention centers, defending the right to family reunification, an immediate halt of deportations, and the rights of all to residency permits and access to schools and universities.

Against every variety of reactionary, let’s fill the air with this call: Open the borders!

First published in French on November 27 in Révolution Permanente.