Guest contributors Hart Eagleburger and Jack Rusk argue that commentators should avoid accusing the Black Bloc of being infiltrated by the right wing or police without any evidence, regardless of how one feels about the Black Bloc 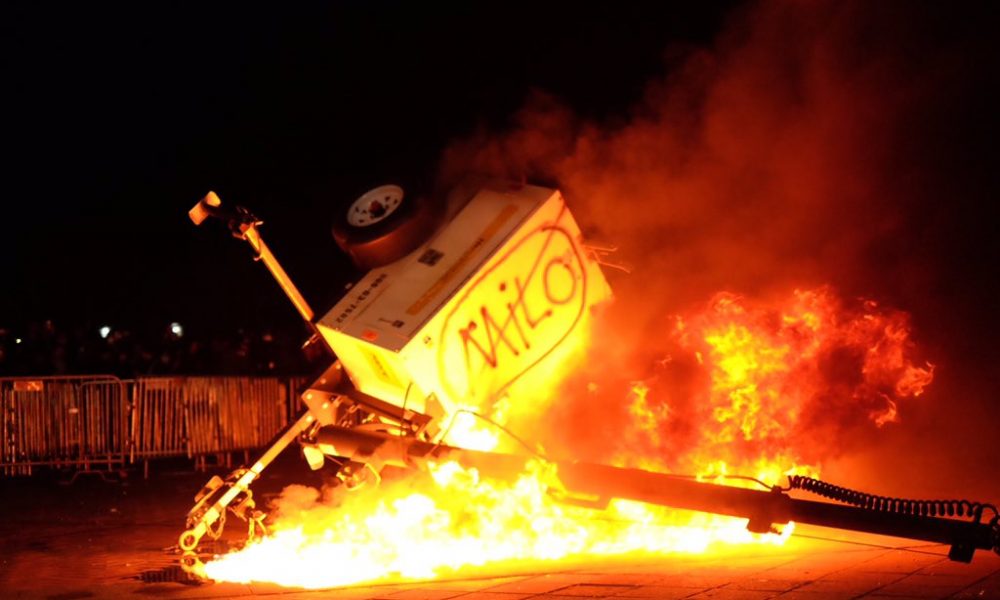 Even before the dust had settled over the February 1st Anti-Milo protest at U.C. Berkeley, commentators on the revolutionary left and elsewhere rushed to debate the events surrounding the action, conversations that are continuing to this day. While there are numerous points worthy of addressing, in this article we desire to single out a disturbing tendency that has arisen in some discussions. This is the tendency to accuse or insinuate that groups on the left — in this case, the black bloc in particular — are either collaborating with or infiltrated by right-wing or police agents. Although we can expect these kinds of charges to be leveled against the left by its enemies, unfortunately some groups on the left are trafficking in them as well. Such charges are destructive to the left and unworthy of the socialist tradition.

Before we proceed, we want to reiterate our strong support of the anti-Milo Berkeley antifa action. But a more comprehensive discussion of the event, antifa organization, and related topics will have to wait until a future date.

The liberal press was, predictably, apoplectic in its response to the demonstration, recycling the tired tropes of defense of “free speech,” opposition to “violence,” and pleading for “dialogue” and understanding. Such conventional wisdom falls on deaf ears of those who have listened to this plaintive nonsense thousands of times before and who have rightly rejected the advice of those who seek to undermine the revolutionary left.

One liberal commentator, however, truly outdid his colleagues in condemnation of the antifa protesters. Robert Reich, a U.C. Berkeley professor and former Secretary of Labor under Bill Clinton and a familiar Democratic Party pundit, cooked up a bizarre theory that “almost paramilitary” right-wingers — perhaps even in league with Milo and Breitbart — were responsible for the “tumult and danger” that transpired. “I know what I saw,” thundered the author of Saving Capitalism (and star of the eponymous film), “They weren’t Berkeley students. They were outside agitators.”

Now, anyone with the slightest whiff of sense would surely laugh off this frantic barrage of lies and slanders. Nobody took a survey of the black bloc participants or the protesters, but it is unthinkable that U.C. Berkeley students were not healthily represented among them. But even if it were the case that purely “outside agitators” had descended upon campus to shut down this hateful event, it would be an act of solidarity worth celebrating, not denouncing. Lastly, the only source that Reich has for his outrageous accusation that protesters were merely Breitbart agents is Reich’s own fantastical imagination.

Irresponsible Accusations Should be Avoided

Sadly, even some on the revolutionary left have made unfounded accusations of nefarious forces inside the Berkeley black bloc. The World Socialist Web Site (WSWS) covered the Berkeley antifa action in three recent articles in which the authors do not allege collaboration with right-wing forces, but instead infiltration by the police. “There can be little doubt,” concludes one of the pieces, “that significant numbers of the hooded anarchists who rioted in Berkeley were police agents or informants.”

Little doubt? How can the WSWS be so sure? Another of the articles provides some guide as to how they reached this conclusion: “Self-proclaimed anarchist groups, referred to as ‘black blocs’ for the color of the masks they wear, are an open door to infiltrators from the police seeking to use violent actions by individuals to discredit protest movements and set people up for arrest.”

It is undeniable that police agents in the United States have a long and sordid history of infiltrating left wing political organizations including black blocs. And naturally, any police agents within the ranks of the left should be exposed and expelled. However, neither the WSWS nor anyone else has disclosed any evidence that would persuade one to believe that there are police agents inside the Berkeley black bloc. These kinds of blanket accusations (which many leftists have the good sense to ignore) foment fear, distrust, suspicion and division inside the ranks of the left, and are fundamentally counter-solidaristic. Furthermore, the claim that black blocs are more vulnerable to infiltration by police than other kinds of left formations is, at best, debatable.

Clearly the WSWS doesn’t like black blocs, as they disparage them in all kinds of ways: they are “thoroughly reactionary,” composed of “demoralized and disoriented elements from the middle class,” acting “no differently” than how “police and paid provocateurs would act,” etc. Regardless of how an organization feels about black blocs in general, any group that claims to be socialist should avoid irresponsible and harmful accusations of police infiltration.

Any Group Can be Infiltrated

The International Socialist Organization (ISO) also, regrettably, stooped to alleging police infiltration of the black bloc. However, the ISO did so by insinuation rather than direct accusation. In one of the two articles Socialist Worker ran about the protest, author Derek Wright writes, “Sometimes, weeks or years later, it comes to light that some of these people were actually undercover cops, deployed to stir things up and make the protest look bad, to make people afraid to participate, and/or to give the rest of the force an excuse to unleash.” Clearly this passage is designed to give the impression that it might have been the case that police agents were among the black bloc protesters.

True, it could be the case that the Berkeley black bloc was peppered with police agents. But we have just as much evidence for that theory as we do for the theory that the ISO is teaming with police agents — precisely zero. As mentioned before, left groups of all kinds have been targeted for police infiltration, so the possibility can’t be dismissed out of hand. But no responsible socialist should insinuate such things about another group without irrefutable evidence. And, to anyone’s knowledge, the ISO has nothing of the sort.

To Socialist Worker’s credit, it recently ran a letter by an eyewitness to the protest which criticizes Wright’s insinuation: “We should also avoid speculating without real evidence that protesters might be undercover cops. This is unnecessarily divisive in an argument about tactics and strategy, and sowing suspicions of infiltration has itself at times been used as a repressive tactic by the state.” We agree completely.

One important point made by Wright is that the presence of thousands of protestors was necessary for the black bloc to have any cover to prevent them being arrested, which is surely true. But then the article takes a contradictory position, agreeing with a police spokesman that they “showed remarkable restraint” — but only because, the author says, the police wanted to enable destructive acts in order to distract from the mass turnout:

For whatever reason, the order to clear Sproul Plaza was never given that night. I believe, although I have no proof, that it was a conscious choice to let the “riot” basically do whatever it wanted, so the only media footage would be fires and broken glass, not students getting beaten and sprayed by militarized cops. There was a little bit of that, but not enough to get any media attention.

It is true that police make decisions about how to intervene in protests with one eye on the political effects. But are we seriously supposed to believe that the cops had an interest in giving the black bloc control of the situation, when they were already unable to prevent the shutdown of the event?

Really, the police were trying to avoid giving the crowd any more reason to sympathize with the black bloc than necessary, because the crowd was already making it impossible to hold the event and if they became outraged with police violence it would cause a bigger problem. The police were restrained because the larger crowd was powerful, and didn’t want to risk it becoming more powerful and radicalized. The black bloc and the mass demonstration reinforced each other by creating a situation that was both confrontational where it needed to be and too massive to control. It is a bad strategy to condemn the black bloc for making a more militant protest, because a demonstration that doesn’t give the cops trouble often fails to disrupt anything.

It is quite appropriate that different revolutionary organizations should contend for the allegiance of the masses by putting forward their respective political views. However, even though the conversation often gets heated, ideally socialists should conduct their discourse on a comradely level. Insinuating or accusing another left grouping of collaborating with or being infiltrated by insidious agents of the right-wing or the state — absent any evidence of such behavior — falls short of that standard. If an organization has a critique of the black bloc, in the specific case of Berkeley or in general, it should be possible to articulate it without resorting to reckless and unsubstantiated allegations.

The allegation that a leftist works with the police, might be working with the police, or seeks to benefit from police manipulation of the crowd is toxic, as it sews distrust between people who are highly committed to a common goal. Such commentary is definitely meant to discredit the black bloc in this case, and whatever the political arguments that could be made, shepherding people away from tactics that are effective does not serve the development and strength of the movement. If the strategy is to carry out the defense of everyone threatened by the far right by shutting them down, then a demonstration with multiple tactics leading to greater disruption has to be the goal, given that militant tactics are sometimes necessary and effective.