More than seven months after Hurricane Maria, Puerto Ricans are still reeling — not only from the power outages and water shortages caused by the storm but also from the ruthless austerity measures imposed the U.S. Government. However, the people of the island are beginning to organize, fight back and determine their vision for a new Puerto Rico. 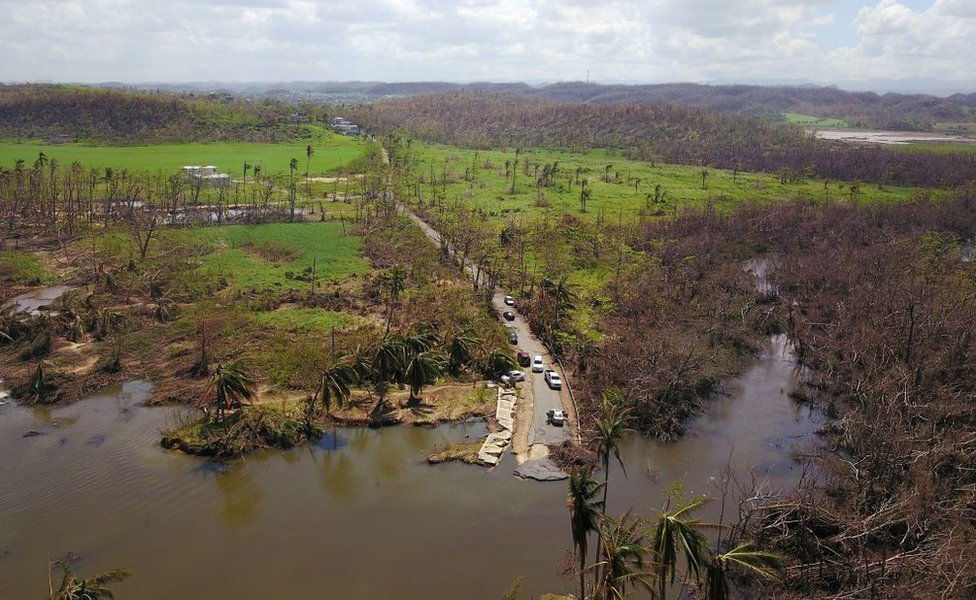 Things were dire last year even before the storms ravaged Puerto Rico. The island had already been mired in a deep economic crisis for more than a decade. A population that had peaked at 3.9 million by 2004, was reduced by half a million people by 2017.

The economic dictatorship that had been put in place in late 2016 — the infamous Financial Oversight Board, jointly imposed by the Obama Administration and the Republican-led Congress — was barely beginning to extract blood from the population before the hurricanes hit. Known to Puerto Ricans as La Junta, its mandate was to impose a harsh austerity regime to bleed the Puerto Rican people dry in order for the holders of a $73 billion bond debt to be paid back their usury loans.

By late spring last year, the Junta had compelled the colonial government to agree to a long list of attacks on ordinary people that included pension cuts for three-quarters of government retirees, cuts in sick days, a reduction of the minimum wage of workers 24-years old and younger to $4.25 per hour, and a plan for the eventual slashing of 75 percent of the budget of the University of Puerto Rico — a higher education system that rivals any in the continental U.S.

At the same time, Puerto Ricans had begun to organize a growing movement against these grotesque attacks. For example, the university students staged a two-month strike that affected each of the 11 campuses of the system. The strike, which ended in the summer, was most likely the prelude of more to come.

The stage was being set for more intense battles. La Junta and its puppet colonial government were developing even more draconian plans—despite the sporadic squirms of the pro-statehood governor, Ricardo Roselló, who lamented the loss of maneuvering room to distribute political patronage rewards. Meanwhile the popular movements were reorganizing and reassessing their strategies.

Then this war of position in the terrain of class struggle was forced into a temporary pause when back-to-back hurricanes, Irma and Maria, devastated the island and took its economic development back some 30 years.

A period of emergency and deep loss

The austerity plans that La Junta had to satisfy Wall Street were in disarray. The magnitude of the devastation was such — economic experts estimated $95 billion in losses — that many pundits thought that there was no way that the island could ever repay its debt. Of course, this was true even before the battering of the hurricanes. Even President Trump, when he visited the island in his paper-towel-throwing mission two weeks after Hurricane María, briefly suggested that the holders of the debt should have forgotten about being repaid — only for his words to be retracted by his staff the next day.

For months, the public focus of the federal and colonial governments and the attention of the international media were on the relief efforts, or rather on the criminal inefficiency of these efforts. The immensity and overtness of the abandonment of millions of people without water, electricity, or communications by the colonial government, was matched and outdone by the crass disdain of federal agencies such as FEMA and the U.S. military apparatus — with its huge resources that it would not move to rescue people in a manner commensurate with such resources, to clear roads, drop food and water — actions that it can swiftly carry out for war on the other side of the globe.

The Puerto Rican people spent many months without water service or electrical energy. According to the Roselló’s administration, currently 95 percent of the users have electrical power, yet many people doubt this figure, since the service is spotty and fragile. The grid has been brought back into service through precarious patches which are prone to fail. During the second week of April, a downed tree caused 990,000 customers to temporarily lose their power once more. Then a week later, the whole island lost its power again.

To this day, the colonial government insists that the numbers of deaths due to the hurricanes are less than 70 while a number of studies suggest that they are over 1,000. There still are towns in the middle of the island that do not have their electricity restored, with many areas remaining relatively inaccessible due to the number of rural, hilly roads that had multiple collapsed segments.

The perversity of the neglect shown by the Trump Administration is complemented by the ineptitude and ideological game-playing of the Roselló Administration. Hoping to convince the population of the savior role of the U.S. government, believing that such a scenario will boost the desire of Puerto Ricans to become the 51st state of the U.S., Roselló has consistently taken a passive attitude toward the relief effort. However, this has backfired for the crass disdain of federal agencies like FEMA has generated a deep well of anger and cynicism among vast sectors of the population.

Many Puerto Ricans in the diaspora organized right away to gather of supplies and mobilize volunteers across the U.S. to provide the relief that the U.S. government refused to give. We watched in horror at the scale of the devastation and the social dislocation that ensued. We saw an additional 200,000 Boricuas leave the island for the mainland U.S. in desperation over the course of two months. And many did not get the economic support that they imagined they would get. Already, many Puerto Rican families who had emigrated to Florida over the past few years due to the economic crisis had lived in motels and cars for long periods of time. An untold proportion of the Maria refugees have ended up joining them.

On the Island, FEMA denied thousands of relief applications because people could not produce titles to their homes. Many Puerto Ricans do not have titles because they built their homes on lands owned by family members or their employers, or simply as a result of land struggles. Thousands of homes will eventually end up permanently abandoned by people who cannot afford to rebuild them, or whose age or medical conditions will keep them from doing the work themselves.

As the economy of the island lies in ruins more people have been compelled to leave. We are on track fall below the 3 million inhabitants mark by the end of this decade. For many months the population lived day-to-day in survival mode. Under such conditions it was very difficult to organize a vigorous political response to the neglect of the government. Yet from within the rubble people organized to secure access to water, food and other basic necessities.

Autonomous citizen brigades and mutual aid organizations (a few of which have been developing for years in response to the economic crisis) rolled up their sleeves and went to work the day after the hurricane. It included groups such as the Centro de Apoyo Mutuo, which helped organize sister groups in various towns across the island. And for months that is all they could do: help with the important task of organizing ordinary people to cooperate with each other in securing basic necessities and clearing roads (even small concrete bridges were built), for they learned that the government would not do it.

The months of outright despair for the population were not wasted by Wall Street and La Junta. They debated what to do about the debt, while various bondholding sectors jockeyed for their own positions. After several false starts, the U.S. federal government came up with offers of grants and loans totaling tens of billions of dollars. It’s not enough to repair the island to cover the needs of its people; instead, it will attract new lending upon the premise that a large fraction of these federal disbursements will one way or another end up in the pockets of bondholders, while the rest would be a bonanza for major real estate speculators and developers.

These are not island natives but U.S. billionaires that had already been attracted years ago to Puerto Rico by laws enacted by the colonial government guaranteeing them exemption from local and federal taxes. While the international press has focused on the obscene plans of cryptocurrency speculators to buy vast tracts of land to found their own town in Puerto Rico, the big players of U.S. real estate tourism and their developer partners have set themselves up for an enormous payoff—people like John Paulson who before the hurricanes already owned $1.6 billion worth of hotels, condos, office buildings and other properties in San Juan.

Under pressure by Congress, La Junta rushed to compel the colonial government to implement revamped plans to make the Puerto Rican people pay the debt. Vacation days will be reduced, the Christmas bonus would be ended or drastically cut (not an insignificant source of income in and island with a median annual income $19,000), the first of several university campuses will be closed in Utuado, and 183 public schools will be closed on top of the 167 that were closed last year before María. Furthermore, the governor signed into law the wholesale conversion of public schools into charter schools, New Orleans style.

The arrogant disregard for the lives of ordinary Boricuas on display by these obscene attacks on a people still recovering from the ravages of the hurricanes has generated widespread anger. The party of the Gov. Roselló is in disarray, with several internal factions doing battle with each other. Even longstanding supporters of Puerto Rican statehood are openly complaining at the appointment by their governor and party leader of several gringos to head Puerto Rican government agencies such as the Education Department and the Puerto Rican Electrical Power Authority, which has also been scheduled for privatization.

The people, on the other hand, have come a long way in recovering their fighting capacity. The first week of April, public school teachers went on a one-day strike to protest the school closings and the wide scale imposition of charter schools. They have plans for another one-day strike in anticipation of a May 1 island-wide work stoppage currently being organized by unionists and other activists. Parents, students, and teachers across the island are protesting the closing of their schools.

Another significant development is the coming together of several hundred leaders and activists from a wide variety of movements and organizations in February, in the neighborhood of Mariana, Humacao. They met in the warm embrace of the neighborhood who organized the first internationally known effort appealing for direct donations to Puerto Ricans organizing their own hurricane rescue efforts.

The participants discussed collaboration not only to strengthen their opposition to the attacks of Wall Street, the imperial U.S. government and its puppet local government, but more importantly, they discussed how to create a new, overarching movement to fight for a new Puerto Rico. They addressed what self-determination means in concrete terms: in food production, housing, energy, etc. As one of the hosts of the event said, “What moves us, at the center of everything is the question, what makes us happy? And this question guides us because the most important way for us to present an alternative to the life we are living today is an alternative which at its roots has happiness.”

This is not any kind of mesmerizing happiness, for it is a happiness founded upon concrete social justice and self-determination for everyone, springing from the people coming together, and fighting together for that new Puerto Rico.