Although so far only four cases of coronavirus have been detected in Mali, the country is preparing for a pandemic. This virus will devastate countries like Mali, already ravaged by colonialism and imperialism and suffering from a high poverty rate. 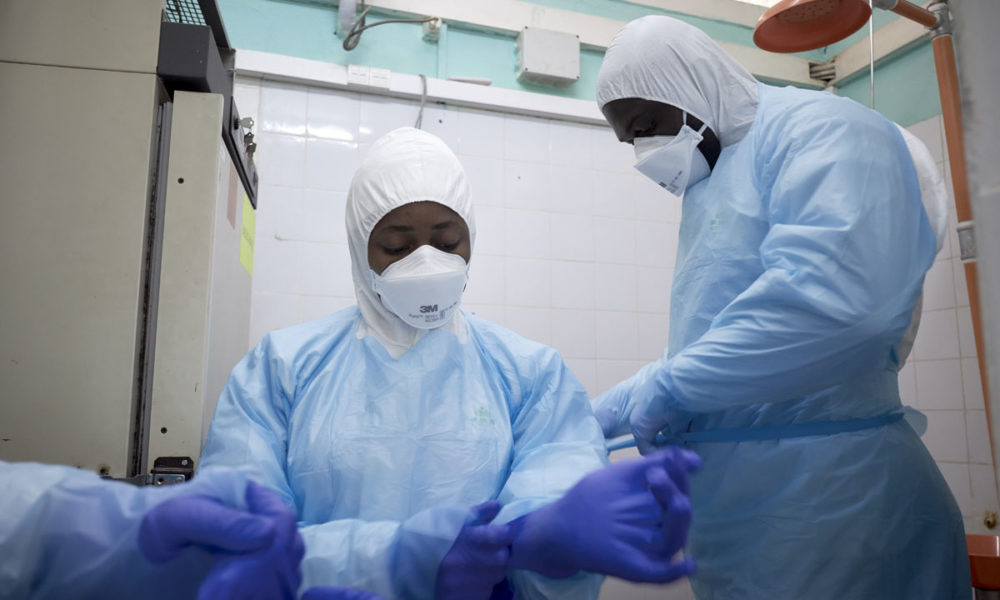 Malian researchers get dressed to conduct a COVID-19 coronavirus test at the University Clinical Research Center of Bamako. Photo by MICHELE CATTANI / AFP

When the first coronavirus death occurred in sub-Saharan Africa, the director of the World Health Organization (WHO) called on the continent to “prepare for the worst.” The death occurred in Burkina Faso, bordering Mali. As soon as the virus began to spread outside China, Mali renovated an abandoned hospital to transform it into a containment center with only seven beds and a respirator.

The Malian Ministry of Health has just 600 liters of alcohol gel, 59 infrared thermometers, and 2,000 test kits. It has one ventilator per 1 million people, meaning 20 total ventilators. Voluntary self-isolation, meanwhile, cannot be considered in a country whose economy depends primarily on the informal sector.

Although it began spreading first in other continents, the coronavirus is now present in Africa. More than 1,500 positive cases have been detected in 43 African countries. In some countries, curfews, border closures, and lockdowns are already in place.

The Virus That Affects the Rich First

The class lines, at first, worked against the African elites. Many were infected through study, work, travel, and diplomacy in different European countries and returned home to escape the contagion. They transported the virus back to their homelands. These actions have aroused hatred among the poorer sections of the population, knowing that they are subjected to the worst health conditions. The actions of these African elites who fled the quarantines of France and Italy, ignoring proper quarantine procedures in their native country, have led to many being questioned for their privileges and irresponsibility. How can they not be angry when the entire economy class of a flight from Paris was quarantined in the airport of the capital of the Ivory Coast, while sportsmen and officials traveling on business could go directly to their homes without being checked?

When Experience Is the Only Resource

The dramatic resource inequalities between Africa and Europe have already been highlighted during health care crises of the past and present. In the midst of a total lack of resources, malaria, Ebola, Zika, and HIV have already been disastrous for many African citizens.

A steep curve of Covid-19 infections will be difficult to address with the current infrastructure and the general life conditions of the working classes and poor people. Togo has four beds available for coronavirus care. Kenya has a center with capacity for 120 people. About 190 million people in sub-Saharan Africa lack access to clean water. In Zimbabwe or Somalia, not a single drop of rain has fallen in eight months, and droughts have already led to major famines. Tainted water is among the main causes of the spread of hemorrhagic diarrhea, cholera, and typhoid.

If the coronavirus spreads in Africa, as it has in China and Europe, we are likely to see catastrophic numbers of deaths among the younger population. The immune systems of the 26 million people with HIV or the 58 million children with chronic malnutrition will be more vulnerable to the disease.

The Virus Is Imperialism

Meanwhile, the imperialist states of France and Germany have prohibited their companies from exporting medical equipment. All European governments, without exception, have announced rescue plans for the big capitalists through credits and tax exemptions.

Tedros Adhanom Ghebreyesus, the director of the WHO, warns that Africa must prepare for the worst. But no one points out that European and American imperialisms have already prepared the continent in the opposite direction. Centuries of imperialist plunder have sown misery, fratricidal wars, “natural” disasters, and pandemics that ravage a population for whom the struggle for survival is part of everyday life.

In the face of this, as Josefina Martínez and Giacomo Turci point out in Izquierda Diario: “The only progressive solution to the crisis of the coronavirus can come from the action of the working class not only on a national scale, but also internationally. And to bet on it, we need from now on to raise an emergency program that allows the exploited and oppressed not to come out defeated, dispersed and impoverished from this crisis, but as an active force, more organized and conscious of its own strength.”