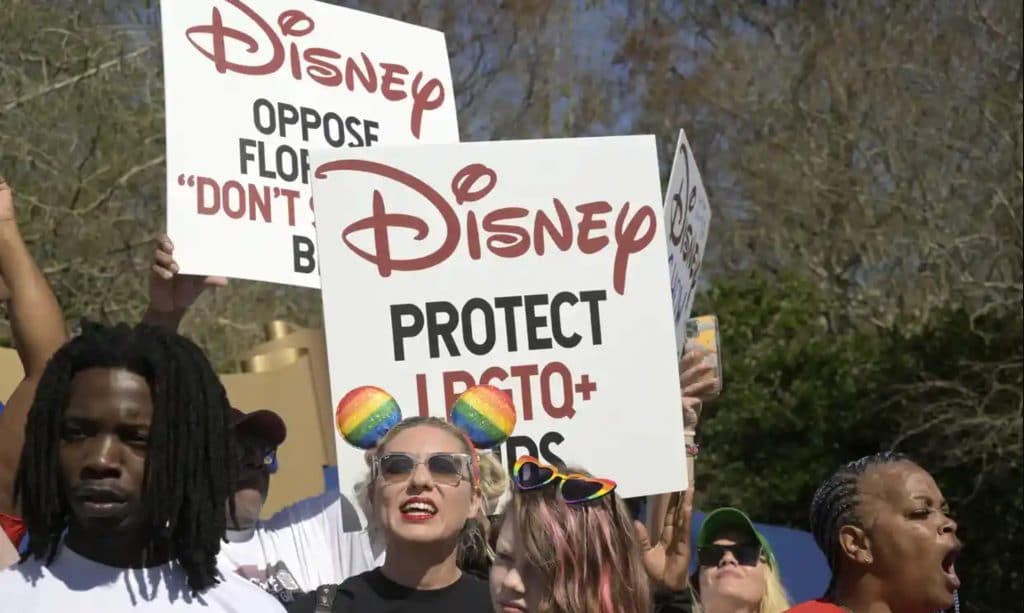 Things aren’t so magical at Disney. The company, which has been in process of monopolizing much of the entertainment industry, has long been a hyper-exploitive employer, but labor struggle at the corporation has recently risen to a new level with employees staging walkouts this week and next to protest Disney’s refusal to publicly condemn the recent anti-LGBTQ+ measure (commonly known as the “Don’t Say Gay” bill) enacted in Florida.

Disney’s relationship with the state of Florida is deeper than it may appear. Disneyworld revolutionized Florida’s economy and placed Disney in a central role within Florida’s finances. Because of this, the company is also deeply involved in state politics. As Audrey Jewett, a political science professor, put it to the Guardian: “You could argue that Disney has had a bigger impact on Florida and central Florida than any other company or group.”

This created what the Orlando Sentinel described as a “symbiotic relationship” where “​​Disney would fertilize the politicians’ campaign accounts with cash — top it off with free hotel rooms and park passes — and then the politicians would do whatever Disney wanted. Disney got tax breaks, incentives, taxpayer-funded advertising, even a law guaranteeing companies would never have to offer employees paid sick time if they didn’t want to. Basically, the two sides were political cronies who swapped favors for cash.”

Disney’s political ties have put them into a complicated situation. On one hand, they try to market themselves as an inclusive company, adhering to a brand —  one that stretches back to their inception  — of positivity and “magic,”despite the fact that, of course, they were founded by a ruthless capitalist bigot who made his fortune by exploiting his animators. On the other, in order to continue playing nice with their political allies, Disney has aligned itself politically with proponents of a far-right social agenda which contradicts the happy family image that Disney tries to put out.

In fact, Disney has donated to every single sponsor of the “Don’t Say Gay” Bill.

Disney’s original response to the bill’s passage was the predictable yet unacceptably insufficient commitment to creating “inclusive content.” Workers have accepted neither this performative move nor CEO Bob Chapek’s lackluster statement; while Chapek internally spoke out against the bill, he has so far refused to publicly condemn it. In response, workers are demanding that the company stop donating to the sponsors of the bill, publicly commit to a concrete action plan to address issues within the corporation, publicly stand with the queer community, and allocate funding to create a specifically queer brand that focuses on LGBTQ+ voices, among other demands.

We stand with Disney workers and all workers across the country who are fighting their bosses’ complicity in the recent spate of terrible anti-queer and trans laws being enacted throughout the U.S. As Republican-led attacks accelerate, workers across sectors must organize a unified force to fight for the LGBTQ+ community.