After months of struggle, 10,000 Disney workers in California won a $15 an hour starting wage and improved working conditions. 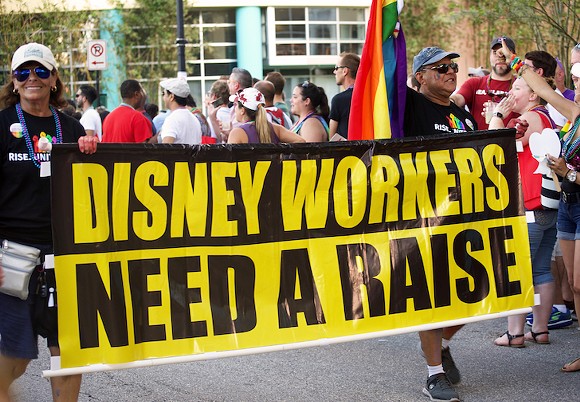 U.S. workers’ struggle to raise the minimum wage to $15 reached Disney’s “Magic Kingdom” in California. According to the Los Angeles Times, unions representing almost 10,000 workers at Disney theme parks approved a new contract on July 26 that will raise the current starting hourly wage of $11 to $15 by 2019. This surpassed the state of California’s plan to raise the official minimum wage to $15 only in 2020. The Disney workers’ three-year contract raises wages for a third of Disney’s 30,000 theme park workers, including workers at California Adventure Park, Disney’s Anaheim hotels and the commercial district. It also includes a retroactive raise of 3% (or 50 cents an hour, whichever is greater).

Fast food workers were the first to fight for $15 an hour, but the demand has long since reached other sectors. Today, U.S. workers whose jobs are precarious or who have gone years without a raise are in a new mood, thanks to the recent news that the U.S. economy is growing—one of the few bits of good news in the Trump era. It therefore seems like as good a time as any to fight for better wages. Such was the case last spring with the teachers’ strikes in several states and, more recently, with the hospital workers’ struggle in Burlington, Vermont.

You may be interested in The Price of Wonderland: Homeless Disney Worker Dies in Car

In contrast to many of the union contracts signed in recent years that were unfavorable to workers, this contract succeeded in requiring Disney to provide specific explanations when it wants to dismiss or suspend a worker. The contract also increases the minimum time between shifts from 9 to 10 hours, requires Disney to give workers more flexibility to take vacations and makes it easier for part-time workers to obtain full-time positions.

After the Disney workers’ victory, the official #FightFor15 account tweeted:

“Starting in January, 9,700 more workers at Disneyland will make at least $15/ hr, AND many will get a 20% raise IMMEDIATELY. To win big, we can’t just rely on minimum wage increases, we need to build strong unions and win good contracts.”

According to the Los Angeles Times, union members said Disney had offered to increase the minimum wage several months ago in exchange for cuts in workers’ benefits and a clause to avoid future conflicts. This workers rejected this proposal and continued the fight until they won. Disney may soon face a new conflict if in November, voters approve a new law to force large companies that receive municipal subsidies to increase their minimum wage to $18 by 2022.

The new fight for better wages is an important shift for U.S. workers whose salaries have been frozen for the last decade. The new signs of struggle have already unsettled hotel companies and Disney’s shareholders, who spoke out against the new contract. Disney and other Anaheim employers have already announced the formation of a coalition to defeat the November ballot initiative.

The fight will thus likely intensify. For the moment, however, the workers in the Magic Kingdom of precarization have won their first important battle.