Dispatch from the Ground: Birmingham Goes All Out for Amazon Union

On Sunday afternoon in Birmingham, Alabama I went canvassing for the Amazon union. The support for the union was overwhelming. The whole community is backing these workers. 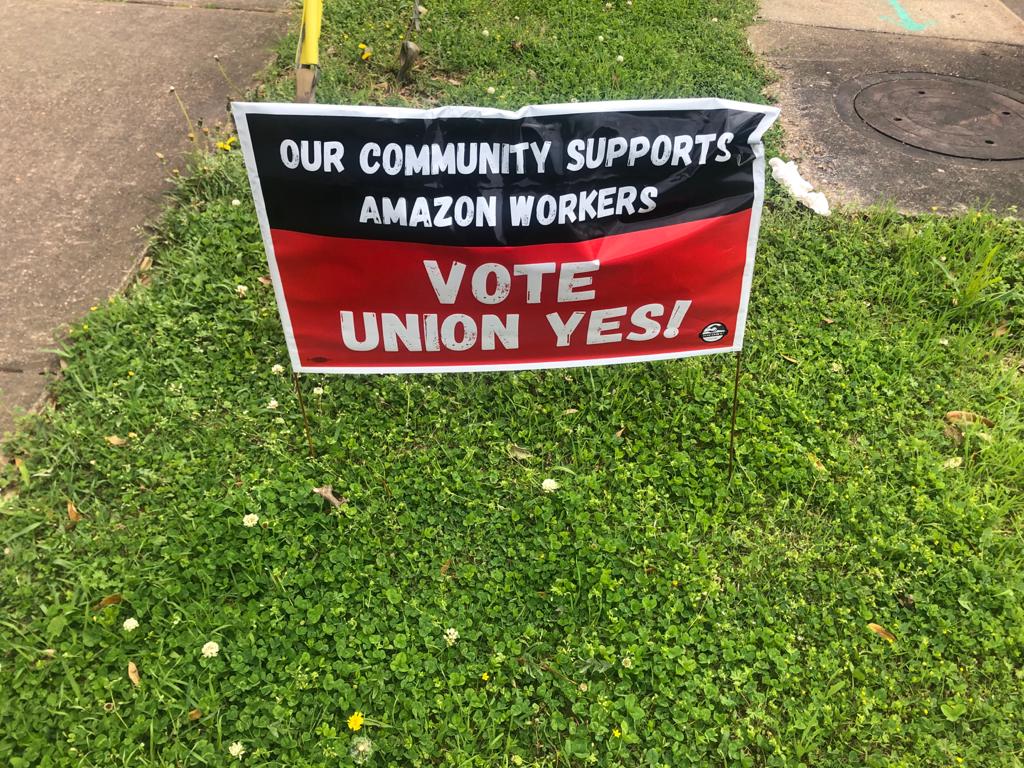 Shortly after flying into Birmingham from New York City, my Uber driver and I strike up a conversation. I ask him what he thinks about the Amazon unionization effort. “My dad was a union man,” he says. “We should all have unions.” He isn’t unionized, and works during the week at the University of Alabama, the biggest employer in the Birmingham area. He drives Uber on the weekends.

This is the new normal for workers in America.

After decades of attacks on unions and on the most basic living standards of workers, this is what making a living looks like: Work in an office during the week, drive Uber on the weekends.

I arrive at the headquarters of the Retail, Wholesale and Department Store Union (RWDSU) in Birmingham to canvass for the Amazon union drive. I run into the chair of the Birmingham DSA; he’s running around, getting everyone organized to go out into the community. The Birmingham DSA has been on the front lines of supporting the unioniation effort and is helping to coordinate all the solidarity from outsiders as well. Just the day before there had been a big rally with Amazon workers.

Several members of Socialist Alternative are in town in solidarity with the Amazon struggle as well — a teacher from Massachusetts and other folks who came from New York City and other states. They organized the rally the day before, providing food and speaking about the importance of this union drive. There are other folks who traveled from near and far to help out — a DSA comrade from Mississippi, an independent filmmaker from New York City. Several Left Voice comrades from New York City are driving hundreds of miles to be in Alabama as well.

Everyone here knows what the workers are up against. Amazon is waging a vicious anti-union campaign, spending $10,000 dollars a day to convince workers to vote no on the union.

I’m paired up with a DSA comrade who moved to Birmingham recently. We drive to the community where my co-canvasser lives. It’s a predominantly Black community with small family homes. We knock on doors to get people to sign up in support of the unionization effort. If folks are enthusiastic, we give them a sign to put in their window as well.

The support was overwhelming. Everyone we talk to has heard of the unionization effort and everyone supports it.

We speak with an older Black woman whose daughter works at Amazon and supports the union. “It’s not right how they are treated,” she says.

We meet a former Amazon worker. “I got fired unfairly,” he says. In the middle of the pandemic, he got fired on a technicality. His partner gets home as he’s signing the petition, and she says, “Is this for the union? That’s right, that’s what they need.” He takes two signs and before we have finished walking down the driveway, there is a sign in the window.

Another woman works at UPS. “We have a union. And if we have a union, Amazon workers should have a union too.” Her aunt works at Amazon, but doesn’t support the union. She asks for a sign anyway and puts it in her window.

While walking down the street an older Black man stops us. “Guess how old I am?” he says. He doesn’t look a day over 50, but he tells us he’s 65. He demands a sign to show his solidarity with the union.

Finally, we get to a house where two kids are outside playing. Their dog starts barking wildly and I think I’m about to be eaten on my first day in Birmingham. A woman calls the dog into the house. As soon as we tell her that we’re supporting the Amazon union, she says “Yes! Hold on! I’ll be right out!” Two seconds later, she opens the door again. “My sister supports the union too! Hold on!”

Outside we hang out with 7 year old Jamal,* who we give a sign. He starts marching around the lawn humming something familiar. After a moment I realize it’s the same rhythm and cadence of “Black Lives Matter.” His friend comes over and we give him a sign as well. The two of them start marching around the yard. They tell us they watched the protests on TV. The Black Lives Matter movement continues to mold new generations of activists.

The woman and her sister come out of the house and explain that they’ve applied to work at Amazon, and they know a union will help create better conditions.

These reactions should come as no surprise. After all, 65% of people view unions favorably. Among the Black community, the numbers are even higher. A study by the Economic Policy Institute shows that “unions help raise the wages of women and black and Hispanic workers – whose wages have historically lagged behind those of white men … Black and Hispanic workers get a larger boost from unionization than their white counterparts”. The Center for Economic and Policy Research showed that black union workers are “13.1 percentage points more likely to have employer-provided health insurance, and 15.4 percentage points more likely to have employer-sponsored retirement plans”.

In this community outside of Birmingham, people know firsthand that Amazon workers are hurting. Many have family members who work at Amazon. They’ve been directly affected by the spread of non-union jobs by companies like Amazon and the cuts of union jobs at places like UPS.

It was the neoliberal onslaught of the past 40 years that relentlessly attacked unions, resulting in abysmally low union rates today: only 6.3% of private employees are currently unionized. Central to the success of these attacks on workers  was an ideological push to convince them that unions are bad. These tactics are still on display today in every anti-union effort, including the one at Amazon in Bessemer. The bosses spend millions on union-busting campaigns, using the same old anti-union rhetoric they always have — just look at the absurd “do it without dues” Amazon website.

But some workers’ wariness about unions isn’t completely unfounded, although it is misguided. In the face of attacks from the bosses, union leaders have capitulated and accepted austerity and failed to fight for better working conditions. Attacks on the working class have passed without much of a struggle.

The neoliberal offensive and lack of fight back from unions has created the dire conditions for workers today. That’s why an office worker at the University of Alabama is also driving Uber on the weekends just to make ends meet. And that’s the experience of workers all over the country, which contributed to the teachers’ strike wave in 2018.

What’s more, unions haven’t used their power to fight in social movements: the Black Lives Matter movement didn’t include many work stoppages or major actions by organized workers. Union bureaucrats do everything in their power to make workers believe that their power lies at the ballot box supporting Democrats who will inevitably sell out workers. Union leaders make sure that unions aren’t seen as fighting tools for social movements. Nevertheless, the Black Lives Matter had a profound effect on the labor movement — in fact, it was part of the inspiration for the unionization effort at Amazon.

As we walk back to the car, the street has a smattering of signs supporting the Amazon union. This work is important — to turn passive support into more active solidarity, even if it’s just a sign. I hope Amazon workers see this and feel emboldened to vote yes on the union, despite the huge anti-unionization campaign. And I hope they see that the working class all over the city — and in fact, all over the country and the world stand with them in this struggle.

Left Voice will be on the ground in Birmingham all week covering the Amazon unionization effort. Follow us for updates on the struggle.