This Year’s remote meeting of the United Nations General Assembly reflected the continued global health crisis as well as the ongoing and increasingly sharp economic battle between the US and China. 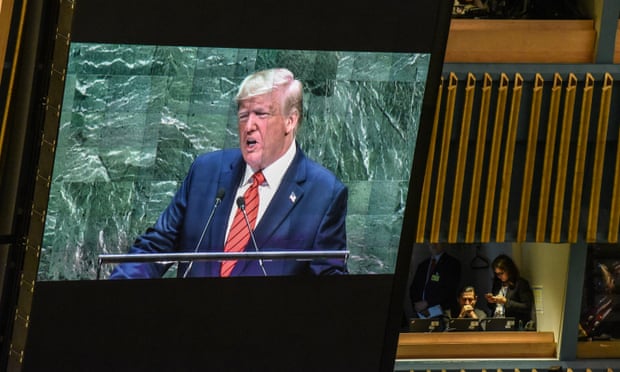 The United Nations General Assembly, which took place last week, coincides with the celebration of the organization’s 75th anniversary. What would have been a big celebration was actually a show of Zoom diplomacy. Without celebrations, without the thousands of delegates, diplomats and heads of state seeking their 15 minutes of fame, forcing Manhattan to shut down, the UN could not hide the crisis it is facing. This UN session is a powerful metaphor for the exhaustion of the “liberal order” that emerged after World War II under the leadership of U.S. imperialism.

It is not only the coronavirus pandemic, which has already made its first trip around the world and may be starting its second wave in Europe. And the first wave never ended in the United States or Latin America. The UN crisis also reflects the fact that Covid-19 has accelerated preexisting crises. It has brought about the worst economic crisis since the Great Depression, induced by the shutdowns and the resulting social crisis and political polarization. Tensions have intensified between the United States and China, and there is great tumult around the U.S. presidential elections. Above all, we have seen the return of class struggle, which could play a decisive role in the near future.

In the first days of the UN session, there were speeches by representatives from four of the Security Council’s five permanent members — the United States, Russia, China, and France, which have veto power. The fifth member, the United Kingdom, was relegated to one of the last days of the session, reflecting the country’s loss of clout after Brexit. The event also included a bizarre speech by Brazilian president Jair Bolsonaro, who defended his disastrous health policy and denounced the fires ravaging the Amazon as a campaign by the opposition media.

The virtual assembly was shaped by the growing conflict between the United States and China and its possible outcomes. Rodrigo Duterte, the right-wing Philippine president, used a proverb to describe the conflict and its effect on other countries: “When elephants fight, it is the grass that suffers.”

UN President António Guterres of Portugal, who was one of the few to speak live, spoke to this as well. He warned that the rising rivalry between the United States and China could lead to a new Cold War. Guterres argued that the world is going in “a very dangerous direction,” because the economic, commercial and technological rivalries between the United States and China will inevitably become “a geostrategic and military divide.” He also discussed the failure of populism and nationalism, noting that their health policies have not contained the virus and instead have made things worse. He argued that the UN was going through its “1945 moment” — referring to the institution’s founding, and thus comparing the ravages of the pandemic to the ruins of World War II.

Russian president Vladimir Putin used his speaking time to sell his country’s vaccine against Covid-19. He offered to vaccinate UN personnel free of charge, which hardly served to dispel the suspicion that his state security agencies are behind the Novichok poisoning of opposition leader Alexei Navalni.

French president Emmanuel Macron complained in an extensive 48-minute message (the time allotted was 15 minutes) that the rivalry between the United States and China was dominating international politics, condemning minor powers like France to irrelevance. He spoke especially to the leaders of the European Union, whom he said should not act as powerless spectators. He did not, however, present a clear plan for how they would face American hostility in the face of an eventual second Trump presidency.

Unlike his French colleague, Trump used half his time. He sent a video that was more like a campaign ad aimed at his right-wing base than a statement to the UN. He focused on his America First doctrine. In only seven minutes, Trump raged against the Paris climate agreement, criticized the nuclear agreement with Iran, and mentioned China more than 10 times.

Like in his campaign rallies, he spoke about the “Chinese virus.” He blamed China for the coronavirus pandemic and accused the World Health Organization of being little more than a front for the Chinese Communist Party. And he urged the United Nations to bill China for the economic and political cost of the Covid-19 pandemic.

Even though the United States has already reached the fatal mark of 200,000 deaths and Trump has promoted science denialism and “anti-quarantine” protests, he claimed that the White House had launched “the most aggressive mobilization since World War II” to combat the coronavirus. But the core of his speech was to flaunt imperialist military power, the Pentagon’s massive budget, and state-of-the-art weapons. “I just pray that we don’t have to use them,” he said. 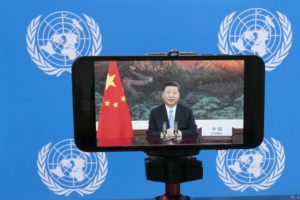 Chinese president Xi Jinping took advantage of this to sell Chinese hegemony as a stabilizing global force. He criticized protectionism and praised the benefits of globalization and international cooperation. And he said he would not fight any war, not even a cold war. It is clear that today Chinese industries suffer more under the conditions of Trump’s trade war, which targets Huawei and other technology sector companies.

The Trump administration has combined offensive and unilateral imperialist initiatives, with some isolationist perspectives to confront the hegemonic decline of the United States. The U.S. is enacting an aggressive policy of imperialist control in Latin America, which goes from hostility against Cuba, Venezuela, and Nicaragua to choosing a Trumpist war hawk as the head of the Inter-American Development Bank. Trump’s foreign policy includes renewed sanctions against Iran and the advance of the “redesign” of the Middle East with agreements between Israel, the United Arab Emirates, and Bahrain, in terms of enlisting an anti-Iranian alliance. The growing militarization of the South China Sea, beyond the electoral motivation, must be read within this logic.

Those who believe that a Biden victory will revive “multilateralism” and the illusion of a kind of “world governance” forget that the UN has always been at the service of U.S. imperialism. Think back to the Korean and Vietnam wars or the imperialist wars in the Middle East, many of which included direct intervention of the “international community” through the United Nations.

The rise of China as a competitor represents a strategic problem for U.S. imperialism, although today it is far from putting world leadership in question. That is precisely what the change in national security strategy is about, which brought to the fore the conflict between the great powers — China and, further back, Russia — relegating it to the “war against terrorism.”

Although Democrats and Republicans have methodological differences — whether it is with trade wars, unilateralism, or winning allies — they share the strategic necessity of containing China’s advance. Hence, the election campaign has become a competition between Trump and Biden to see who is more anti-Chinese. That doesn’t mean that war is around the corner. But the strategic nature of the dispute inherent in the capitalist-imperialist system puts this possibility on the table for the future, unless the revolution strikes first.