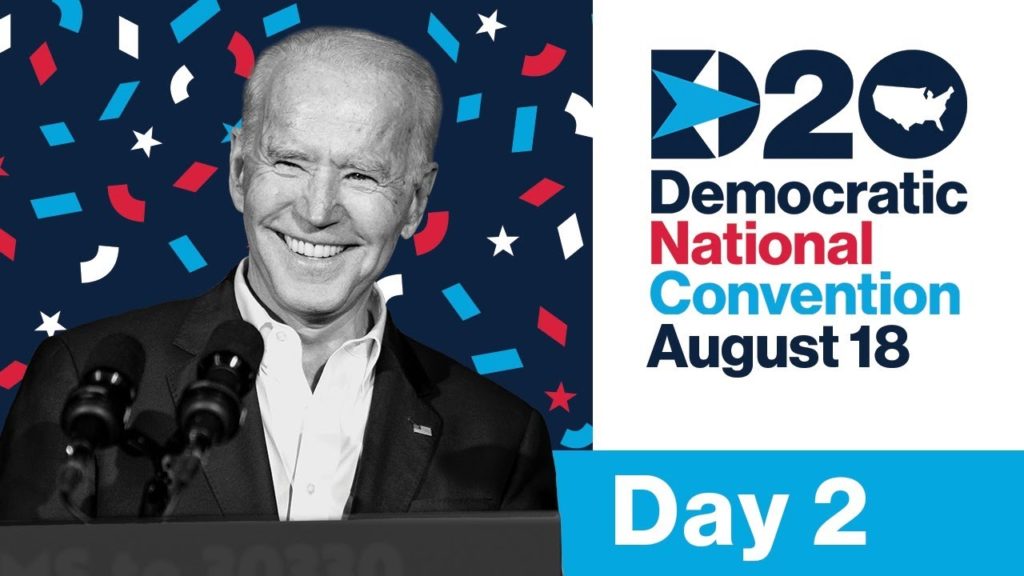 The second day of the Democratic National Convention continued much the same as the first with the biggest occurrence being a lengthy roll call vote in which speakers from every state and territory made a short speech pledging their delegates to Biden. The speeches continued to be light on Biden and heavy on Trump, but a few pieces of policy did begin to creep through — namely, that Biden will take an even more aggressively imperialist stance on foreign policy than Trump and that Biden really loves private insurance.

The one notable moment from the (very) long roll call vote was Alexandria Ocasio-Cortez’s nomination of Bernie Sanders. Her 60 second pre-recorded speech raised eyebrows among some on Twitter, who either praised or criticized her for her perceived snub of Biden. However, in actuality, AOC’s speech was part of a convention formality in which every candidate still in the race for the nomination — as Sanders technically was — had to be nominated and seconded. As such, AOC’s speech was not an act of resistance from the left-wing of the Democratic Party but rather just another piece of political theatre. Indeed, she tweeted yet another endorsement of Biden mere moments after the speech aired and went live on Instagram to further elaborate her support.

Despite the absolute disregard shown to the progressive wing of the party at the convention — with very few of their policy proposals being adopted into the platform and only AOC and Sanders getting time to speak — they are united behind Biden and the establishment wing. The same day that AOC spoke, the DNC removed opposition to fossil fuel subsidies from their platform in a clear rejection of even slight progressive pressure around the environment. This represents a slap in the face for all those who supported them.

AOC, like Sanders, played lip service to the power of social movements, but then she helped walk those movements into the belly of the Democratic Party, where they will be eviscerated, harvested for empty slogans, and discarded to die. Just as Sanders’s speech last night indicated, rather than pushing the Democrats to the left, the Democratic establishment has pulled Sanders and AOC to the right and re-established the Democratic Party as the party of moderates. At the beginning of the primary season, the “Bernie Sanders” wing of the Democratic Party was driving the bulk of the conversation around the issues. However, since Sanders’s Super Tuesday defeat and the economic crisis caused by the coronavirus, the “Joe Biden” wing has regained control and is painting themselves as the “party of stability.” Now, Sanders and AOC are left to parrot back the party line. They are both supporting a man who opposes them on all of the major issues that they claim to care about. Just as we saw with George McGovern, Jesse Jackson, and countless others, the Democratic Party establishment will always win and liquidate their left wing when the conditions allow. It is a strategy that has been disastrous for the left for decades and one that we cannot afford to try again.

The fact that AOC was relegated to a 60-second formal nomination speech after all of the work she has done to restore the reputation of the Democratic Party is the perfect metaphor for the futility of the strategy of “pushing the Dems to the left.” Even war criminals got more time to speak at the convention than AOC. Former Secretaries of State Colin Powell and John Kerry both spoke as part of a larger section on Biden’s foreign policy. The line of the night was that Biden would actually be “tougher” on other countries than Trump has been. “Tougher” is — and has always been — a euphemism for imperialist domination. Indeed, one video package specifically referenced how Biden tried to keep troops on the ground in Syria while Trump pulled them out as a reason to support Biden. This goes hand-in-hand with Biden’s nationalistic rhetoric such as his ad attacking Trump for being weak on China.

In a moment where tensions are rising with China and it seems likely that the economic crisis could cause the international situation to shift, it is both dangerous and important that the Democrats are framing Biden as someone who will be “tough” on foreign policy. The Democrats are trying to frame Biden in this way as an attempt to appeal to Republicans to sway them away from Trump. So far, nearly the entire DNC has been targeted at the Bush/McCain/Romney voter. In this sense, Biden is presenting himself as a thread of continuity from the Bush era (as the presence of Powell indicates) to the Obama era, both of which saw innumerable deaths and vast destruction for those in countries subjected to U.S. imperialism.

Biden’s entire campaign pitch, once you strip away the vague moral statements, is that he will restore capitalist stability. Part of that stability means the continued (and potentially escalated) exploitation of the global working class. Campaign speakers mentioned that Biden would take “Buy American” seriously and would take a hardline with America’s “enemies.”  He is running to the right of Trump on foreign policy, which is a major reason why so many Republicans who cheerlead the Iraq war are supporting him.

Following the racial justice panel from the first night, Biden hosted a panel on health care on the second night. This panel featured testimonies of people who have suffered great tragedies due to the poor quality of American health care. Biden’s response to this — in terms of policy — is to shake his head and talk about how we need to make healthcare “affordable.” This was one of the big lines of the night: Biden will make sure everyone “can afford health insurance,” which is just another way of saying that, as president, Biden will continue to oppose universal health care at every turn. This is not surprising — Biden has gone so far as to say he will veto Medicare for All if it passes during his term — but it is as clear an indication as any who Biden actually will serve.

In the midst of the worst pandemic in a hundred years, Biden and the Democrats are still groveling before pharmaceutical and insurance companies which, in effect, puts millions of people at risk of infection, impoverishment, and death. And they are doing all of this right after an incredibly popular candidate won several states on a platform based around Medicare for All. Even with the “left pressures” of Sanders and the progressives, even with the pandemic, even with the economic crisis, Biden and the Democratic establishment have held firm against working class people having healthcare.