“Do You Miss Me Yet?”: CPAC Shows that Trumpism Is Here to Stay

Last weekend’s Trump-centered CPAC demonstrated that Biden’s project to “return to normal” is doomed to fail. Trumpism, far from having been defeated in November, is here to stay. 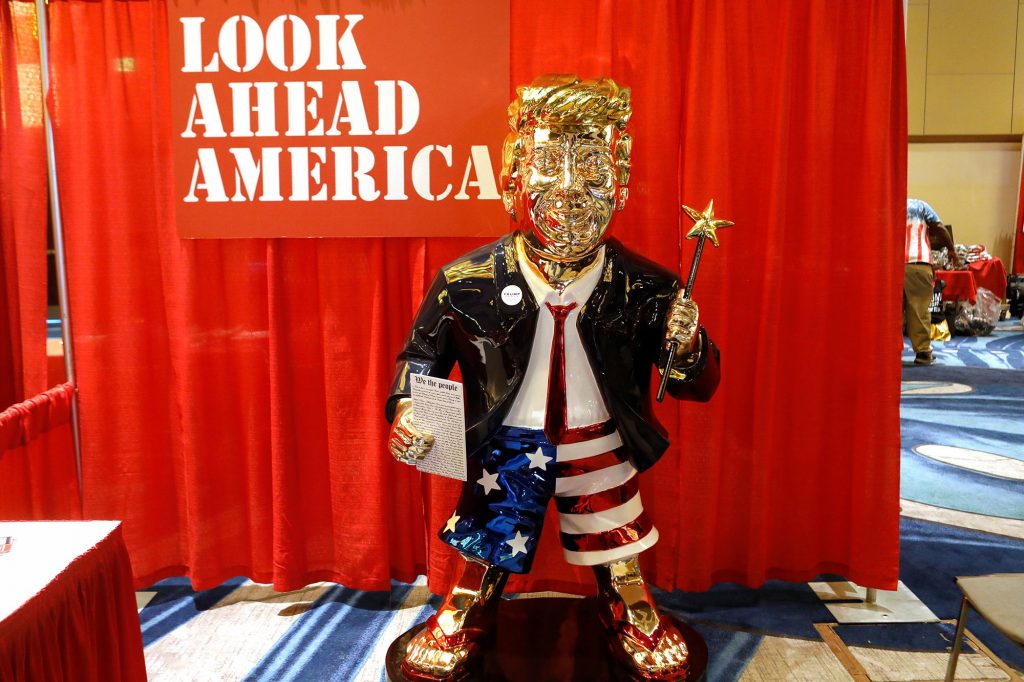 Those words of Senator Ted Cruz from his speech to this year’s Conservative Political Action Conference (CPAC), which concluded on Sunday, could just as well have been the tagline of the entire event. While the theme was officially “America Uncancelled” — undoubtedly spurred by social media companies throwing Trump off their platforms in January after the attack on the U.S. Capitol — it was perhaps the clearest demonstration yet of the extent to which Trump has remade the Republican Party in his own image. The weekend’s summit reaffirmed that Trumpism, far from having been defeated in November, is here to stay.

CPAC is the largest annual gathering of conservative leaders and grassroots activists — a right-wing “superbowl,” in the words of conservative activist Charlie Kirk — featuring speeches from many of the highest-profile Republicans. The event often offers a glimpse into the shifting center of gravity of the conservative movement, and an opportunity to scope out the new blood and the up-and-coming stars who may be the future Republican presidential candidates. Among those who received the strongest receptions and began to shore up their image as 2024 contenders were South Dakota governor Kristi Noem and Florida governor Ron De Santis, both of whom bragged about their states’ lax coronavirus restrictions and keeping their economies open.

The speakers and videos eschewed policy discussions to touch instead on the usual bogeymen: antifa, George Soros, China, the “Squad,” and, of course, socialism. As this year’s theme indicated, “cancel culture,” free speech, and political correctness run amok also featured heavily, with speech titles such as “Bill of Rights, Liberty, and Cancel Culture,” “The Left’s Assault on a Free People,” and, comically, “The Way Forward: Unlocking Our Churches, Our Voices, and Our Social Media Accounts.” Repudiating Trump’s deplatforming, speakers warned that conservatives were under attack by the government, the big tech monopolies, the media, and an out-of-control free speech culture, particularly on college campuses.

The notable absences at the conference said as much about this conservative center of gravity as the attendees. Long-time Trump critics Senators Mitt Romney and Ben Sasse were not present, nor was former UN ambassador Nikki Haley, who recently spoke out against Trump. Representative Liz Cheney, who voted to impeach him earlier this month and did not show, was singled out in numerous speeches throughout the weekend. Senate Majority Leader Mitch McConnell, who voted to acquit Trump, was not invited in response to his critical remarks about the former president after the trial. Several popular “moderate” Republican governors, including Larry Hogan of Maryland, Charlie Baker of Massachusetts, and Phil Scott of Vermont, declined to attend. The message was clear: it’s Trump’s party now, and his critics need not apply.

That message permeated CPAC, where thousands sported Make America Great Again and Trump garb, and posed with a gaudy, 6-foot tall gold-painted sculpture of Donald Trump dressed in American flag shorts. In interviews, many attendees pledged fealty to Trump over the Republican Party, and vowed to leave the party if he does not run again in 2024. It came as no surprise that Trump won 55 percent of the votes in the traditional attendee straw poll, with De Santis a distant second. But Trumpism was not just an aesthetic, or a fringe “Trump-or-bust” attitude — it touched just about every facet of the summit.

Nearly every CPAC speech and forum centered around Trump’s pet issues, from law and order (“Same Badge, Different Beat: To Protect and Serve, or Socialist Social Workers?”), to China (“Quad Goals: Fighting Communist China From All Four Corners”), to immigration (“The Looming Humanitarian Crisis at the Border”). Consistent with the “uncancelled” theme, speakers also railed against “big tech” and made unsupported claims about conservatives being censored on social media. No fewer than nine speeches focused on voter fraud and the importance of restoring the “integrity” of U.S. elections. While not every speaker explicitly embraced the notion that last November’s presidential election had been outright “rigged” or stolen, that claim is clearly being used as state GOPs prioritize enacting highly restrictive voter laws on their agendas. CPAC may indeed have confirmed that conservativism’s tectonic plates have shifted — firmly in the direction of Trump.

Demonstrating his continued centrality in the conservative movement, Trump was CPAC’s closing act on Sunday. His rambling, 90-minute speech — highly reminiscent of his rallies — was practically a checklist of his favorite topics and grievances, punctuated by standing ovations and, at various points, vigorous chants of “We love you!” and “You won!” Claims about election rigging were, of course, a centerpiece, and he went into depth about all the fraudulent votes and illegal voting practices used to steal the election — “a disgrace.” He also spoke at length about strong borders, “illegal aliens,” and law and order, and excoriated President Joe Biden’s “radical immigration policies.” Less restrained now that he has left office, Trump repeated his infamous racist line about Latin American countries: “They’re not giving us their best and their finest. Remember I said that? … We turned out to be 100 percent correct.”

His foreign policy talking points were likewise Trump chauvinism redux. He mentioned China 23 times — twice using the racist term “China virus” he coined to refer to Covid-19 — and criticized the U.S. trade deficit with the country and its dominance of “the future of the world.” He emphasized that NAFTA, the Iran nuclear deal, and the Paris Climate Agreement were some of the “worst deals,” and that Biden had rejoined the World Health Organization in a “horrendous surrender.” Trump also repeated his claims about “endless wars” and, revisiting another of his classic lines, said, “if you’re gonna go in [to Iraq], keep the oil.” Other targets of his ire were U.S. energy policy, and the “wholly ridiculous Green New Deal.” He even weighed in on transgender women in sports, one of the conservative cultural grievances du jour, in line with the previous day’s panel: “My Pronouns are First Place and Winning: Protecting Women’s Sports.”

Those watching Trump’s speech were undoubtedly waiting to hear about his plans for another presidential run in 2024. While he stated explicitly that he was not going to start a new party, he did not rule out another presidential bid. Instead, he teased, “The incredible journey we began together four years ago is far from over,” and explained his plans for the coming years: “I’m announcing that I will be actively working to elect strong, tough, and smart Republican leaders.” Parts of his speech sounded like a hit list of Republicans who had been disloyal to him. Of politicians such as McConnell, Romney, Cheney, and others, he had strong words: “Get rid of them all.”

But Trump’s valiant return to the conservative spotlight is not due to inertia on the part of the GOP, nor was his rehashing of topics from his old speeches just a display of egotism. They are a result of the weaknesses and divisions within both the Republican and Democratic parties. Republican politicians at the highest echelons of power did not even attend CPAC, and Trump called for cleansing them from the party. Trump and his speech topics resonate precisely because the Biden presidency provides the very conditions for preserving it. Biden’s project to “return to normal,” restore the legitimacy of U.S. hegemony and institutions, and attempt to return to the neoliberal order that preceded Trump’s presidency is doomed to fail. Trumpism here to stay.

In this sense, Trump was by no means “grasping for continued relevance,” as some mainstream media outlets said of his speech. The GOP, particularly its increasingly far-right base, is still enamored of him and the issues — immigration and others — that propelled him to the political stage in 2015. Even if he does not run again in 2024, he and his supporters have made clear that he is still the movement’s standard bearer, and he will likely play kingmaker in the coming years. U.S. Senator Rick Scott, former Florida governor, multi-millionaire businessman, and potential 2024 candidate, was explicit about this. He emphasized that the GOP and “establishment Republicans” cannot take the party “backwards,” because, “if we do, we will lose the working base that President Trump so animated. We’re going to lose elections across the county and, ultimately, we’re going to lose our nation. We’re not going to let that happen.”

Nearly four months after the presidential election and over a month into the Biden presidency, it is as clear as ever that Trumpism and the capitalist crisis that created it are here to stay. CPAC brought this fact into full view, demonstrating why both the grassroots Republican base and its politicians are committed to Trump for the long haul. For all Biden’s promises of returning to normal, the truth is that his administration does not offer a meaningful answer to Trumpism. And far from offering an alternative for the working class, Biden continues to implement the same racist, capitalist, and imperialist agenda. As socialists, our task is not just to fight Trumpism and its gilded manifestations. We must fight to counter both racist parties of capital with the force of the working class, which is under attack now under the Biden administration as it was under Trump.