Dockworkers in the port city of Durban, South Africa have refused to offload an Israeli cargo ship in solidarity with Palestinians. 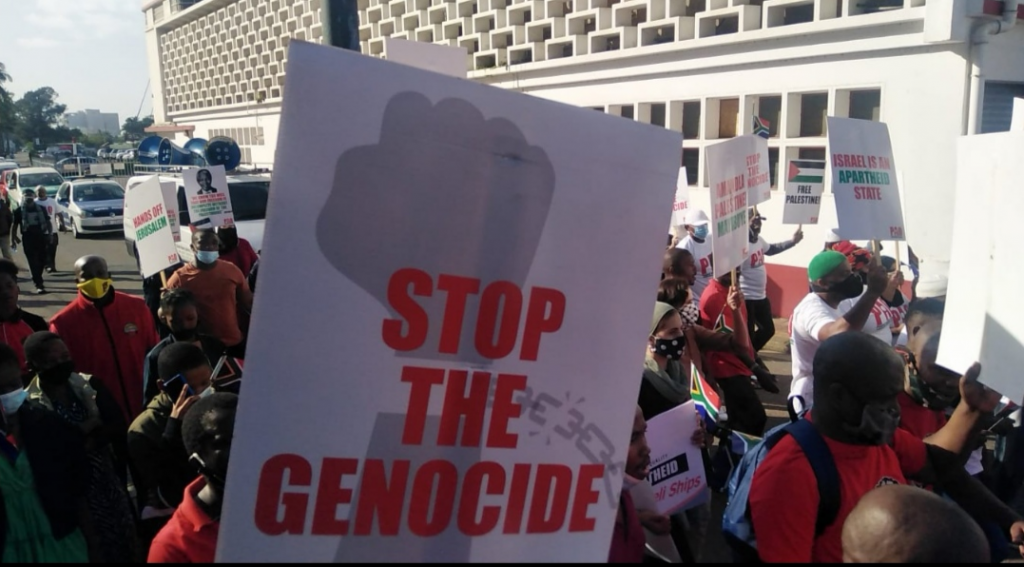 Today, dockworkers in the port city of Durban, South Africa refused to offload an Israeli cargo ship in solidarity with Palestinians. The workers, who are part of the South African Transport and Allied Workers’ Union (SATAWU), are following a call from the Palestine General Federation of Trade Unions which encouraged workers around the world to refuse to unload Israeli cargo at ports and airports. The union did the same during the 2008-2009 Israeli offensive on Gaza.

SATAWU released a statement on Tuesday saying that the union condemned “the atrocious acts of violence subjected to the Palestinian nation.” The statement points out the importance of transportation to capitalism, and its position as a chokepoint which could help win major concessions for the working class: “it is clear that transport plays a pivotal role in time and space compression, on one hand, and the imposition of colonialism and structural inequalities, on the other.”

In their statement, the union notes the parallels between the repression in Palestine and Black struggle in South Africa. Emphasizing the need for South Africans and the rest of the world to show solidarity, the union wrote:

The actions of apartheid-Israel must be met with equal resistance and condemnation that was part and parcel of the anti-apartheid movement… Because history tends to repeat itself, SATAWU will always support any form of struggle aimed at liberating the working-class from the shackles of colonialism, cloaked as the capitalist mode of production. Finally, the liberation of the Palestinian population is equally the liberation of the African nation.

Tonight, the South African BDS Coalition, SATAWU, and other groups will hold a rally in Durban to celebrate these workers’ brave actions and show solidarity with the Palestinian struggle. Rally organizers will also demand that the Transnet port company, owned by the South African government, block all Israeli goods coming through South African ports.

As these brave dockworkers’ actions show, logistics workers in particular are in a strategic position to disrupt global supply chains and grind capitalism — and profits — to a complete halt. If logistics workers worldwide — at ports, warehouses, and airports — follow the example of these dockworkers Durban, these actions of solidarity could be powerful enough to stop the Israeli state’s violent attacks against Palestine and fight for Palestine’s liberation from occupation.