Mike Pappas is a doctor and a member of the Left Voice editorial board. He was arrested tonight while he acted as a medic at a South Bronx Black Lives Matter Protest. *Update: Mike was freed on Friday morning.* 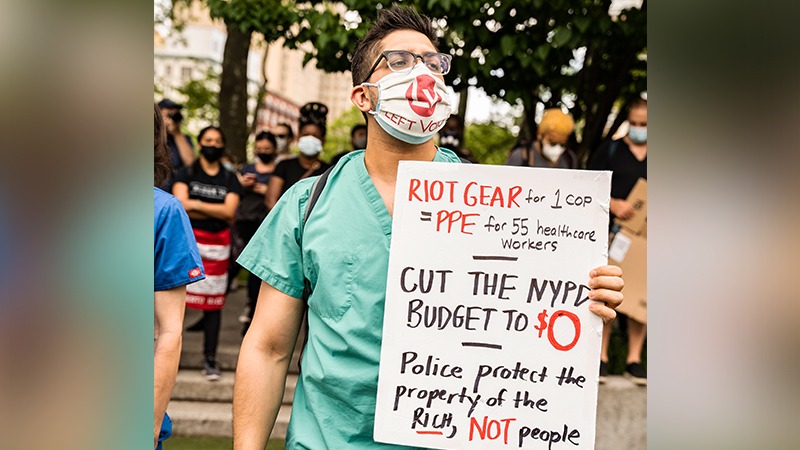 A month ago, Mayor de Blasio and Governor Cuomo spoke ad nauseum about how great our “healthcare heroes” on the frontlines of battling the coronavirus were. Now, a month later, these same healthcare heroes are being arrested for standing up against police violence and defending Black lives. Mike Pappas, Left Voice member and doctor was one of the three healthcare workers arrested. He and all others should be released immediately, along with all other prisoners.

On June 4 a small crowd of about 100 people gathered for a Black Lives Matter protest in the South Bronx. They were there to demand justice for Black lives and all those affected by police brutality. The protest began with speeches by organizers and was followed by a peaceful march through the community. They walked through public housing apartments and were met with cheers by community members.

Many medics, made up of a team of doctors and nurses from NYC who have been fighting on the frontlines of the coronavirus, were present at the protest and were prepared to protect the protesters from the hundreds of heavily armed officers who were surrounding the area. As the crowd marched through the neighborhood, the medics positioned themselves arm in arm at the back of the crowd to ensure that the cops couldn’t enter into the group.

Immediately as 8pm struck and the curfew went into place, the cops attacked. The healthcare workers were immediately arrested, including Mike Pappas, a medical doctor in NYC and correspondent for Left Voice, as well as two other nurses. Just one minute before the arrest Mike was live-streaming for Left Voice, saying “can you believe this?” as he filmed a huge crowd of cops. With the healthcare workers out of the way, the cops rushed the crowd and began beating and batoning the peaceful protesters. Many were held to the ground as cops punched and arrested them.

Mike was there to provide medical assistance and ensure the safety of the protesters. His arrest is part of the violent round ups happening after curfew of people who are doing nothing more than standing outside after 8 pm demanding justice for George Floyd and all victims of racist police violence. As he was arrested, an announcement from a police van can be heard in the background declaring that only essential workers were permitted to be outside. Although “essential workers” are permitted to be out past curfew, healthcare workers were arrested for showing up to demand that Black Lives Matter.

Mike Pappas, a doctor, was arrested by NYPD earlier in the Bronx while working as a medic during the #FTP #BlackLivesMatter protest.Frontline workers like Mike were called “heroes” by Cuomo and DeBlasio a little over a week ago.#FTP #BlackLivesMatter #FreeHealthcareHeroes pic.twitter.com/9tDrt3ouTb

Despite all of the hollow rhetoric about “health care heroes” de Blasio and Cuomo’s police force are arresting healthcare workers. The same healthcare workers who a few months ago fought COVID-19 without enough PPE and in overcrowded and underfunded hospitals. This is how the state thanks these “frontline heroes.”

As Mike has put it, “healthcare workers need to condemn and actively join in the fight against racist institutions like policing that are truly rotten to their core. We need to leave our offices and take to the streets.”

Tonight Mike took to the streets and was arrested for it. Free Mike. Free all prisoners and drop all charges.

Update: Early Friday morning, Mike was released. He was kept in a very small cell with over a dozen other people without masks. Mike says, “The entire system is of policing is completely corrupt. It’s a completely racist system based on a system of slave patrols. And all police are bad. all cops are bad. The NYPD’s budget needs to be defunded to zero. We don’t need any of them.”