Marty Walsh’s record as Boston mayor and labor bureaucrat shows a solid commitment to the liberal politics of compromise and appeasement typical of Biden’s other cabinet choices. 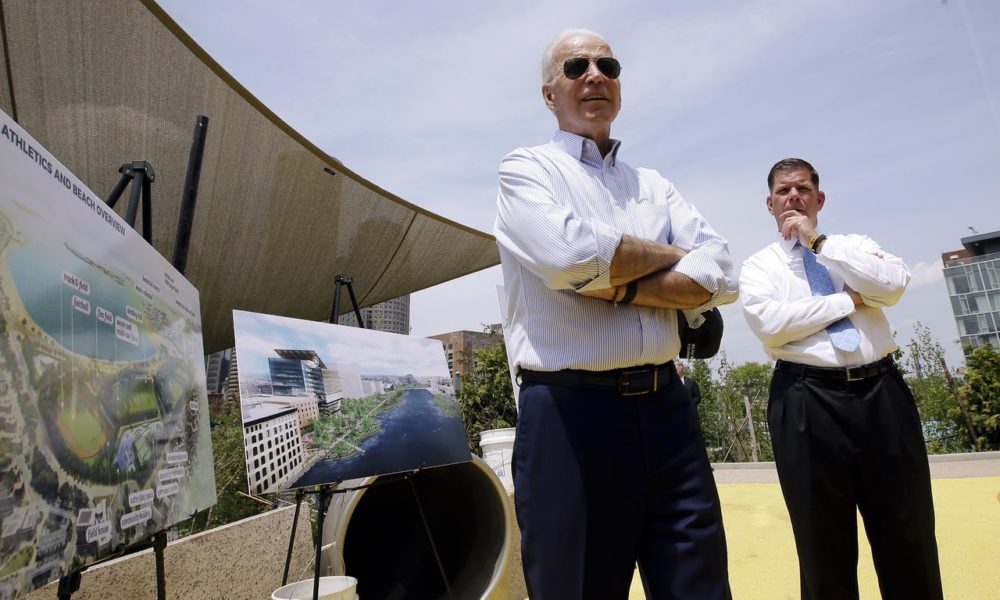 On Thursday afternoon, while the media was still fixated on the far-right spectacle at the U.S. Capitol, president-elect Joe Biden announced the last of his cabinet picks, including his choice for secretary of labor: Boston mayor Marty Walsh. Walsh was a top choice for many national unions, including the AFL-CIO and the American Federation of Teachers (AFT), both of which actively campaigned for his nomination. A long-time union member, labor leader, and state and local politician, he will bring a diversity of practical and political experience to the position, one which is often reserved for politicians, government officials, labor lawyers, and academics. Indeed, if confirmed Walsh will be the first actual labor leader serving as labor secretary since William Usery Jr. was appointed by President Ford in 1976. His background, however, in no way guarantees that he will be an advocate on behalf of working people. On the contrary, Walsh’s history as both a mayor and a labor bureaucrat suggests that he is solidly committed to the liberal politics of compromise and appeasement that have been emblematic of almost all of Biden’s cabinet choices.

The Toast of Beantown

Although Walsh has had his run-ins with unions and activist groups since he became Boston’s mayor in 2013, he remains a widely popular politician in a city that prides itself on its progressive politics. His first campaign was endorsed by nearly every union in the city and many across the country. He won his re-election by a landslide in 2017, and recent polling before his nomination had him leading his closest rival, Councilmember Michelle Wu, 46 to 23 percent in the next election.

Since 2017, Walsh has worked hard to establish himself as a progressive politician, a fierce critic of President Trump, and an advocate for immigrants and immigrant rights. He spoke at several anti-Trump rallies held in the city after the Trump’s election, and has continually defended Boston’s sanctuary city status, going so far as to say that he would allow immigrants to take refuge in City Hall and his office if needed. In 2019, he signed legislation that would prohibit Boston Police from collaborating with ICE and DHS officers on non-criminal deportation cases.

Walsh has not been without his critics, however. Under his term as mayor, rents have skyrocketed, real estate development has exploded, and his administration has spent hundreds of millions of taxpayer dollars to attract large companies, such as General Electric, to build headquarters in Boston. His attempt to bring the 2024 Summer Olympics to the city was fiercely opposed by many residents who complained about the cost and lack of transparency. He eventually backed down, stating: “No benefit is so great that it is worth handing over the financial future of our city and our citizens were rightly hesitant to be supportive as a result.” Walsh also received criticism for failing to meet protesters demands to cut the Boston Police Department budget by 10 percent following the uprisings against the killing of George Floyd earlier this year. Instead, he re-allocated $12 million of the police budget to homelessness programs and other community services.

From Laborer to Labor Bureaucrat

Walsh may be a popular mayor but, ironically, it is his record as a labor leader that should be most disconcerting for working people. On the surface, he appears to be an old-school “working-class guy” unafraid to talk back to the boss and willing to use the threat of a strike or “some other such unpleasantness” to get what he wants. He is a life-long, dyed-in-the-wool unionist from a proud union family. When Walsh struggled with cancer as a child, his father’s union, Laborers Local 223, covered his medical bills; and his father’s wages, pension, and benefits allowed the family to live a decent life even after the father passed away. At the age of 21, he joined his father’s union, and by 2005 he was president, taking the baton from his uncle who had run the local for years.

In 1997, Walsh was elected to represent tthe 13th Suffolk County District in the Massachusetts Legislature, and in  2010 he secured a $175,000-a-year job as head of the Boston Building Trades Council, even as he continued to earn salaries as state representative and union president. It was the Council job and the connections he made there on both sides of the negotiating table that would eventually propel him to mayor.

While his workingclass bona fides are hard to deny, behind closed doors allies and critics alike have described Walsh as a pragmatic negotiator willing to compromise with developers and contractors when it was in the interests of the building trades. The Boston Globe, for instance, described Walsh as “a politically connected labor leader who understood how to usher a project past neighborhood opposition, secure state financing, and keep the peace with developers.”

Stephen F. Lynch,  a U.S. Representative and former president of the Boston ironworkers union, referred to him as a “referee,” adding “He’s got to go in there and talk to the contractors in a way that is more collaborative than the old-style method, which was confrontational. I think he realized the business had changed.”

In this respect, Walsh is the epitome of the labor bureaucrat, whose job is to fight the boss just enough to keep the union alive and his job secure, but not much more. As a negotiator, it was Walsh’s job to keep the peace between developers and contractors, secure high-paying jobs for the union, and thus keep large-scale development going regardless of whether it was good for the broader working class. As secretary of labor, Walsh will face similar pressures from the administration and from capital to compromise, play nice, do what’s best for business, and keep the peace.

If approved by the Senate, Walsh will take over the Labor Departmentat a time when working people are facing almost unprecedented levels of suffering and hyper-exploitation. Since March, tens of millions of Americans have lost jobs or work, many continue to work in unsafe conditions without hazard pay, and unemployment — despite a brief recovery in the spring and summer — has leveled off and sits at close to 7 percent. At the same time, the slow recovery, which appears to privilege high-income white-collar workers substantially over lower-paid service workers, will likely only exacerbate already unprecedented levels of economic and racial inequality.

Among the many challenges of any new labor secretary today, the issues of safety and economic security during the pandemic will surely be on the top of the list. As the coronavirus continues to spread throughout the country, enforcing OSHA standards and passing new legislation to ensure access to protective equipment, vaccines, and hazard pay will be paramount to limit the degree to which continuing and returning workers are exposed to the virus. At the same time, Walsh will be expected to advocate on behalf of continued extensions and increases in unemployment benefits for the millions of workers still laid off because of the pandemic.

While addressing labor problems caused by the pandemic will likely be a short-term priority, there are long-term changes in employment and employment status that have taken place in the United States over the last several decades that have gone largely unaddressed by former labor secretaries. If Walsh wishes to delineate himself from his conservative predecessors, he will have to move aggressively to address the ongoing casualization of the labor market and to push back and challenge anti-labor laws such as California’s recently passed Proposition 22. That proposition, like other state laws across the country, allows employers of app-based services such as Uber, Lyft, and DoorDash to continue to treat their employees as contractors, thus limiting workers’ ability to form unions and allowing the companies to avoid paying overtime, benefits, minimum wage, and paid sick leave.

Another priority for any labor secretary who claims to represent the interests of working people will be to move quickly to help push the House-approved Protecting the Right to Organize Act (PRO Act) through the new Senate as a first step to undo much of the damage caused by the Janus v. AFSCME decision. Though flawed in several ways, the PRO Act could eliminate right-to-work laws in several states, make it easier for workers to form unions, and protect them from employer retaliation when they do. Whether such legislation stands a chance of passing in the new Senate will depend largely upon how strongly Biden and his cabinet push for its approval.

Of course, none of these efforts will address the real needs of labor, or of the working class more broadly. Bourgeois labor law, after all, has never been about empowering workers, but about finding compromises and attempting to create a false peace between labor and capital. In this respect, Walsh is a perfect pick for labor secretary, but not for working people. Really improving the conditions of labor in this country will require a militant labor movement, with ties to the unemployed and non-unionized workforce, that uses strikes and other working-class methods of struggle as weapons to win both economic and political demands.