Donald Trump is an Anti-Semite

Donald Trump recently claimed that any American Jew who didn’t support him was “disloyal.” In fact, Trump is no friend to Jewish people. 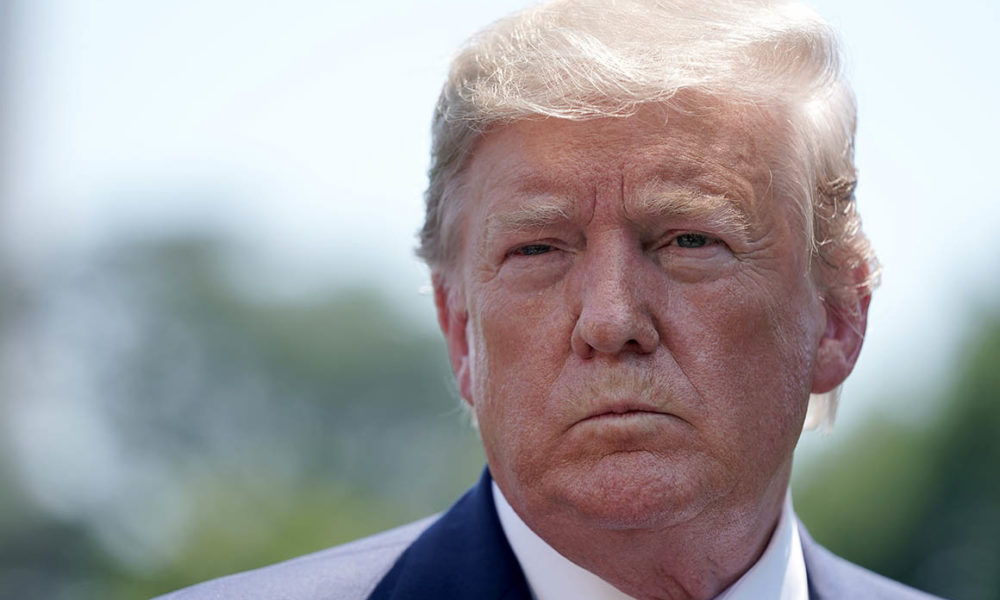 Donald Trump’s statements are, once again, the subject of much controversy after he said last week that Jews are “disloyal” if they vote for Democrats instead of him and tweeted that he is “King of Israel.” These tweets are part of a pattern of Trump actively reaching out to American Jews, specifically around the issue of Israel. With Ilhan Omar and Rashida Talib in the news for their criticism to the Israeli state, Trump is attempting to frame opposition to Israel as anti-semitism as a means to the end of gaining support from American Jews for his re-election campaign. This is not only a craven political strategy but a deeply offensive one, given that Trump has a long history of being an anti-semite and supporting anti-semites. Additionally, by focusing exclusively on those who are opposed to the Israeli state, Trump and his supporters are ignoring the real anti-semitic attacks that are on the rise–attacks that are being conducted by white supremacists.

Trump’s racism has been well documented and discussed, including just last month on Left Voice. However, it is important to revisit, in light of Trump’s new self-portrayal as a “Friend to Jewish People,” how often he has either participated in or condoned anti-semtisim.

In 1991, a close business associate wrote that the now-president told him, “The only kind of people I want counting my money are short guys that wear yarmulkes every day.” In 2015, while campaigning for president, Trump told the Republican Jewish Coalition that “You’re not gonna support me because I don’t want your money. You want to control your politicians.”  In 2017, after the Unite the Right rally, where white nationalists chanted “Jews will not replace us,” Trump argued that there were “very fine people on both sides.” In 2018, while addressing a group of American Jews at a White House Hanukkah party, he said that Mike and Karen Pence “love [Israel]. They love your country. And they love this country. That’s a good combination, right?” In April 2019, Trump spoke again to the Republican Jewish Coalition and referred to Benjamin Netanyahu as “your Prime Minister.”

Trump also has the support of many avowed anti-semites. After all, this is the man who brought Steve Bannon–who ran white-supremacist website Breitbart and, allegedly, didn’t want his “daughters going to school with Jews”—into the White House. David Duke–who has talked about how gentiles and Jews are in an “ethnic war,” is also a supporter of Trump, as is Richard Spencer and other white supremacists.

Given all of this, it is especially difficult to listen to Trump talk at length about anti-semitism and how we must oppose it by supporting the oppressive Israeli state. Trump is a bigot and an enabler of anti-semitic terror who is now falling back on a very common and politically incoherent argument: that to oppose the Israeli state is inherently anti-semitic.

Opposing Israel is Not Anti-Semitic

The argument in favor of Zionism is that Jews deserve the right to self-determination and that to oppose a Jewish ethnostate is to stand in opposition to the Jewish people’s right to self-determination. This is an argument that has been made many times by Zionist groups around the world in order to attack those who support the rights of Palestinians. By this metric, all those who support Boycott, Divestment, and Sanctions (BDS) are anti-semitic; this was the main claim used to deny Ilhan Omar and Rashida Tlaib entry into Israel.

The argument, of course, is both logically inconsistent and politically backward. One people’s right to self-determination does not override anyone elses’ right to self-determination. Furthermore, the idea that Jewish people are somehow all aligned, that they share the same politics, only feeds into the worst anti-semitic stereotypes. Indeed, there are many Jews throughout the world—including in Israel—who are deeply opposed to the Israeli state and stand in strong solidarity with Palestine. Those Jews are often labeled as “self-hating” or, as Trump put it, “disloyal.” This divides an oppressed people and makes it easier for far-right politicians to mask their hate. Additionally, a key element of anti-semitism is to paint all Jewish people as a monolith: “the Jews.” The narrative that Trump and his allies are putting forward also does this. “The Jews” must support Israel because they are one single entity.

Indeed, many modern white supremacists such as Richard Spencer actually support the Israeli state. They do this because, in the words of Spencer, they are proposing a “white Zionism.” After all, the Israeli form of ethnonationalism is precisely what Spencer and his ilk want to recreate for white people in Europe and America. This is one reason why Trump and other far-right politicians are so quick to attack those who support BDS: resistance to one ethnostate may very well lead to resistance to other attempts at an ethnostate.

When the Tree of Life Congregation in Pittsburgh was attacked by a white supremacist earlier this year, it became clear that the attacker targeted that particular synagogue for a very specific reason: they supported HIAS—a Jewish organization dedicated to helping refugees. Indeed, the shooter posted on social media shortly before committing his act of terror: “HIAS likes to bring invaders in that kill our people. I can’t sit by and watch my people get slaughtered. Screw your optics, I’m going in.”

This is reflective of what the real danger to Jews in America is right now: white supremacy. Trump and his allies want to point to Tlaib and Omar, or BDS activists at NYU, or any other left-wing anti-Israel activist when, in actuality, it is the right that is the danger. Within the last week, a man was arrested in Ohio for threatening to attack a Jewish community center. The alleged would-be assailant was a white nationalist who attended Unite the Right in 2017—the same march where participants chanted “Jews will not replace us.” These are the people who are spreading anti-semetic rhetoric and are attacking Jewish centers and Jewish people.

There is a reason why these real and legitimate threats are not being addressed by Trump: he agrees with them. These attacks are the natural consequence of the racist rhetoric that Trump uses and stokes in his supporters. He couldn’t speak out against them strongly even if he wanted to because he relies on the support of the far right. Trump is constructing a political coalition for his re-election campaign and is trying to thread the needle by including both the far right and Jews who are concerned about the rise of anti-semitisim. This is why he has been so out-spoken about Israel lately: it’s the way that he’s hoping to reach American Jews.

What does all this mean?

Anti-semitism is on the rise in the United States with multiple shootings at synagogues and other hate crimes occuring this year. To erase the actual violence that targets Jewish people and simultaneously claim that the real danger is politicians who oppose Israel is both incorrect and dangerous. Trump is emphasizing the latter for a very specific reason: he needs the support of the far-right terrorists who are targeting Jews. Trump and his team are trying to orchestrate a dual political strategy that attracts both Jews and anti-semites.

Trump’s presidency has led to a surge in violence against all those who are deemed an “other,” including Jewish people. The solution to this is not to divide and fall into the anti-semitic narrative that all Jews must support the Israeli state. No, the solution now is the same as it has always been: solidarity among all the exploited and oppressed peoples of the world. In 1936, when the British Union of Fascists planned a march through the Jewish sectors of London, the working people of London—organized by British Communist Phil Piratin— stood in solidarity and fought both the fascists and the police to keep each other safe. The working class can defend itself against anti-semitism. Donald Trump and his white nationalist friends will not keep Jewish people safe, and they do not care about the rise of anti-semitism because Donald Trump is an anti-semite who relies upon division and bigotry to keep his political coalition.