Donald Trump, the Squad and the War Against the Most Oppressed

Donald Trump’s attacks on Ilhan Omar and the “Squad” is yet another chapter in Trump’s war against People of Color and immigrants in the United States. 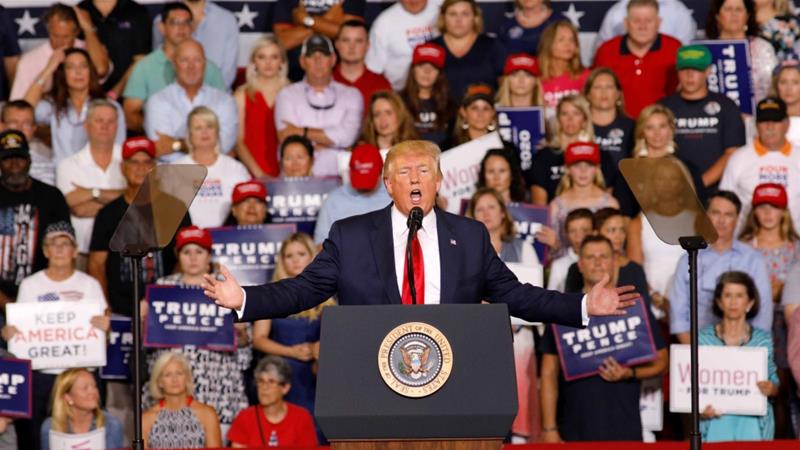 US President Donald Trump attacked US Representative Ilhan Omar at a July 17 campaign rally in Greenville, North Carolina, causing the crowd to chant 'send her back' [Reuters/Jonathan Drake]

Let’s review the current state of affairs: There are over-crowded concentration camps holding children and adults, who are separated from their families and unable to shower or brush their teeth. The President is keeping migrants in a constant state of terror, threatening mass deportations. And, more recently, he told women of color who are Congressional representatives that they should “go back” to where they came from—and since then, has doubled down on this rhetoric.

Trump supporters’ chant of, “Send her back” at his last electoral campaign rally is especially disgraceful in the context of the immigration crisis. Trump’s statements against “the Squad”—which refers to Alexandria Ocasio Cortez, Ilhan Omar, Rashida Talib and Ayanna Presely—are not simple rhetoric. If we look closely at the recent growth in hate crimes, the proliferation of white supremacist groups and most of all the strengthening of the repressive apparatus against migrants, it is clear that this sentiment represents the racist politics of the current President, and indicates his electoral strategy going forward.

Trump’s hateful rhetoric has been a hallmark of his Presidency. In the last Presidential election cycle, Trump kicked off the campaign referring to Latinx immigrants as rapists, gang members and killers who “are bringing drugs… [and] crime.” After the humanitarian catastrophe in Puerto Rico caused by the effects of hurricane Maria—which caused the deaths of 5,000 people—Trump said that Puerto Ricans are lazy and “want everything to be done for them,” implying they do not deserve assistance. After the 2017 riots in Charlottesville, Virginia, where Heather Heyer was killed by one of his supporters, Trump said that some of the neo-Nazis, Klan members and white supremacists who gathered there were “very fine people.”

The hateful rhetoric is aimed at energizing Trump’s most right-wing social base, exciting them to maintain enthusiastic support for Trump. But this rhetoric is more than words. It has a concrete effect on people’s lives. Research has conclusively shown that the oppression of Black, Latino and Muslim communities is intensifying under the siege of white supremacist groups, and that this is connected to the White House’s protection of these hate groups.

From Hateful and Racist Discourse to Concentration Camps

The clearest and most heartbreaking evidence that racism is the ideological justification for Trump’s project at the border comes in the form of the concentration camps. Hundreds of them are filled to the brim on the southern border—and in other U.S. locations—where migrants suffer abuse at the hands of immigration authorities. Thousands of children have been separated from their families and are now in the custody of the American state, and at least six of them have died in detention centers. Recently, the vile and hateful rhetoric used by border patrol agents was exposed by the media, one making fun of a man carrying a child across the river in a plastic bag: “At least it’s already in a trash bag.” There were also photoshopped, sexually explicit images of Ocasio-Cortez with migrants.

Trump has spent the last month announcing raids that would target immigrants in America’s most populous cities, terrorizing hundreds of families. For the most part, the raids did not materialize, but the threat meant weeks of fear and preparation by immigrants and their families.

Last year, Trump said the U.S. doesn’t want immigrants coming from “shithole countries” and in a recent tweet said ‘the Squad’ are women who “originally came from countries whose governments are a complete and total catastrophe, the worst, most corrupt and inept anywhere in the world.”  The migrants and refugees who come to the U.S.—including Mexicans, Central Americans, and Haitians—come to the United States fleeing the conditions created by United States imperialist intervention in the form of military coups, war on drugs, free trade agreements and land dispossession.

Certainly, ‘the Squad’ represents a resistance to this hateful rhetoric and politics, as these women have been active in denouncing the executive branch’s immigration policy and voted against a recent bipartisan proposal to fund border activities. Trump’s hate-filled rhetoric may be a tactic to deepen the division in the Democratic Party, as many analysts say. But the most important effect of these attacks is the continued to emboldenment of a racist, right wing base that is deeply enthusiastic about the President giving “permission” to express the most vile racism. And Trump wants to discipline the Squad to make it clear that people of color, especially women, cannot pose any challenge to the executive and go unpunished.

The wave of repudiation of the president’s remarks about Ilhan Omar and the congresswoman of color expresses the rage of broad sectors that are not willing to tolerate white supremacism in government.

The Intolerable Censorship Against the Critics of the State of Israel

Trump has been especially vicious to Ilhan Omar, who has confronted not only Donald Trump, but the entire Democratic Party by speaking out about the powerful Zionist lobby. With rampant hypocrisy, Trump—known for own anti-Semitic remarks and for emboldening an anti-Semitic base—has accused Omar of hating Jewish people. The U.S. bipartisan regime has always sought to impose the idea that an alliance with a genocidal state like Israel cannot be questioned, and that questioning this alliance is, in itself, anti-Semitic.  Both the Republican and Democratic Parties have tried to silence critical voices and to criminalize the BDS movement. This is unsurprising, since defending the interests of the Zionist state is in the interests of the American state and not in those of Jewish people, many of whom particiate in movements against Zionism.

On the other hand, the young Jewish people who are mobilizing against the concentration camps and are critical of the Israeli government are setting an example. Many are on the front lines, occupying ICE facilities and being arrested by the police. They demonstrate that Trump and his right wing base don’t speak for Jewish people; the activism they embrace must be doubled or tripled in order to stop Trump’s policies.  The offensive cannot be stopped by words—it is imperative to take action.

Democrats Can’t Stop Trump… and They Don’t Want To

Democratic Party leadership is being pressured to defend Ilhan Omar and the Squad, but the reality is that Nancy Pelosi and the party bosses are more than uncomfortable with the insurgency of progressive Democrats in Congress. Only a few months ago, the entire Democratic establishment condemned Omar for speaking out against the Israeli lobby. Just last week, Pelosi and AOC were in a very public dispute around funding for ICE.

Although there have certainly been public spats between the Squad the and the party leadership, these rifts are not fatal. For all their anti-establishment rhetoric, the Squad has voted to make Pelosi Speaker of the House, and some even appeared on a magazine cover with her. Just yesterday, AOC said in an interview that “Just as there were members of Congress that did not vote for the speaker on the House floor the day of our swearing in, just as there are members who challenge her conclusions, who disagree with her, so do we from time to time, but that does not mean that there is a fundamental fracture or a dehumanizing going on within our caucus”.

Even though the Squad is pushing a more progressive agenda than the Democratic Party establishment, it is at the same time working to make the party more palatable to the masses of people who are sick and tired of the same old establishment politics. Indeed, the Squad insists that it is part of the Democratic Party, and that there is room for left voices within this imperialist machine.

But both repressive immigration policies and the alliance with the State of Israel are central to the U.S. capitalist project, and the Democratic Party enthusiastically supports them. The belief that enough pressure from below can stop the Democratic Party  from being an imperialist party at the service of the capitalists is similar to a belief that the immigration crisis can be resolved by writing a letter to Santa Claus.

There are millions in the country who want to stop Trump and fight racism. There are thousands who want to close the concentration camps. Many are against the genocidal policy towards the Palestinian people endorsed by the American state. If the Squad wants to lead a real struggle, it has to be at the forefront of calling for mobilization in the streets. The independent left, for its part, must stop saying that the mobilization must be combined with electoral tactics.  We must begin to organize a real struggle now.