Donald Trump, We Won’t Go Back Where We Came From

Trump is trying to terrorize immigrants with ICE raids and concentration camps. He says we should go home. But we have always been here and are here to stay. 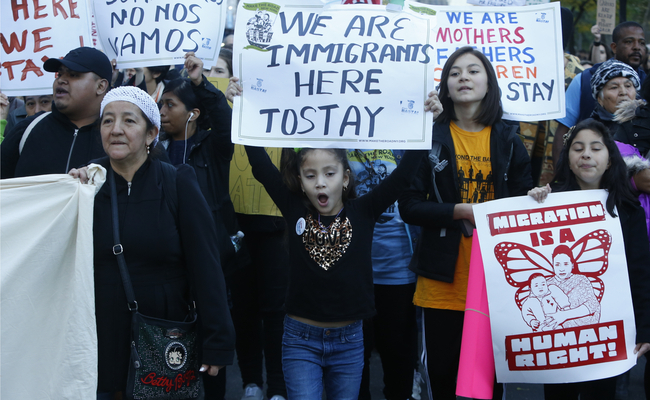 On  Sunday morning, Donald Trump tweeted “So interesting to see ‘Progressive’ Democrat Congresswomen, who originally came from countries whose governments are a complete and total catastrophe, the worst, most corrupt and inept anywhere in the world (if they even have a functioning government at all), now loudly and viciously telling the people of the United States, the greatest and most powerful Nation on earth, how our government is to be run…. Why don’t they go back and help fix the totally broken and crime infested places from which they came…Then come back and show us how it is done. These places need your help badly, you can’t leave fast enough. I’m sure that Nancy Pelosi would be very happy to quickly work out free travel arrangements!”

While Trump composed this hateful tweet, ICE conducted raids on immigrant communities, creating terror in neighborhoods across the country. Raids will take place in several major U.S. cities, including Los Angeles, San Francisco, New York, Chicago, Miami, Denver, Atlanta, Baltimore and Houston. New Orleans was first one of the cities scheduled to be raided, but it has since been taken off the list due to the severe weather caused by Tropical Storm Barry.

The message to immigrants is clear: Go back to where you came from.

While Trump is busy with hateful tweets and ICE is busy terrorizing immigrants, Mike Pence toured detention centers on Friday. 400 men were packed into outdoor cages in the Texas heat. The press reported an extremely foul stench: the 400 people did not have access to showers and toothbrushes, and many of them had been held for over 40 days. The overcrowding was obvious; there was not enough room for each migrant to get a bed.

Mike Pence, my statistics homework is tough stuff. Deciding whether or not to break up with my partner is tough stuff. This, this is something else. This is systematic terrorizing of immigrants. These are concentration camps.

The lies are overwhelming. While the press sat sweating in the “sweltering heat” and the unbearable stench of 400 men who have not showered in weeks, the CBP claims the area was air-conditioned. At Roundtable Discussion with U.S. Border Patrol and Members of the Senate Judiciary Committee, Pence said, “And while we hear some Democrats in Washington, D.C. referring to U.S. Customs and Border facilities as “concentration camps,” what we saw today was a facility that is providing care that every American would be proud of.”

Only a few days ago, Trump echoed this sentiment in a tweet ““Many of these illegal aliens are living far better now than where they came from, and in far safer conditions.”

This is not the first time we have heard this kind of rhetoric. It is reminiscent of when Barbara Bush, upon seeing the tens of thousands of people displaced by Hurricane Katrina huddled together in the Astrodome in New Orleans, said “so many of the people in the arena here, you know, were underprivileged anyway, so this, this is working very well for them.”

And that is how politicians see Black and Brown people: undeserving of anything more than a roof over our heads. In fact, we are expected to be thankful for even the most horrendous conditions. After all, as Trump said at a January 2018 press conference, we come from “shithole countries.”And as  Trump tweeted today, we come from countries whose governments are a complete and total catastrophe, “the worst, most corrupt and inept anywhere in the world (if they even have a functioning government at all).” Ironically, this tweet was clearly directed at “The Squad,”—freshmen congresswomen Alexandria Ocasio Cortez, Rashida Tlaib, Ilhan Omar and Ayanna Presley—but only Omar, who is from Somalia, is a first generation immigrant. Presley is African American; AOCs parents immigrated from Puerto Rico, an American colony; Tlaib’s family comes from Palestine, whose conditions are entirely dictated by US-Israeli occupation. But facts make no difference to Trump and sectors of his white supremacist base.

Black and brown people are all the same after all; even if we have been here for generations, Trump wants us to go back where we came from. To him, we are rapists and criminals trying to take over the American way of life. Trump has built his entire campaign and presidency on terrorizing immigrants, from the Muslim Ban to the xenophobic ICE raids.

There are, however, hints of truth in Trump’s statement: in many of our home countries there is a lot of corruption, poverty and crime. Millions of people are fleeing these conditions. But what neither Trump, nor the Democrats will tell you is that these conditions are the direct effect of US meddling: of US-sponsored and supported coups to protect US corporations and profits. Our countries are a direct product of US imperialism, as are the millions of immigrants in this country, the thousands in US and Mexican detention centers. You, America, have brought us here. But as any immigrant or child of immigrants will tell you, this didn’t begin with Trump. I’ve heard “Go back where you came from” my whole life, as have millions of us. But we are here to stay.

The other kernel of truth in Trump’s disgusting tweet is what he says about Nancy Pelosi. Indeed, the Democratic Party is a deportation machine. The infrastructure for the deportations that Trump is currently carrying out was created by the Obama administration, the “Deporter in Chief.” In the past few months, most  Democrats, including Bernie Sanders, have voted for a border wall. The Democratic Party-controlled House of Representatives voted for ICE funding to keep undocuments immigrants in cages in the midst of a public outcry on the concentration camps. And, indeed, Nancy Pelosi is too busy attacking “The Squad” to defend them from the racist attacks from the right wing, like Tucker Carlson’s disgusting display. Trump is right: “I’m sure that Nancy Pelosi would be very happy to quickly work out free travel arrangements!”

While many Democratic Party politicians have claimed to create “sanctuary cities” in places like New York City, the meaninglessness of this label is becoming clearer than ever this weekend. As New York Daily News reports, “New York is a sanctuary city and the NYPD has told its officers not to aid ICE in performing deportation raids. But in a letter Friday, the head of the NYPD sergeants’ union encouraged members to ‘stand shoulder to shoulder’ with federal agents to help ensure that they ‘return home safely to their families.’” The NYPD is collaborating with ICE and there is nothing DeBlasio or any other Democratic Party politician is doing about it.

This is far from surprising. The capitalist class, which the Democrtaic Party represents, profits immensely from creating an undocumented group of second class citizens to hyper-exploit in the United States.

But sectors of US workers and youth are much better than the leaders of the two capitalist parties. In the past weeks, there have been powerful expressions of solidarity with migrants. Hundreds of Jewish people have mobilized and been arrested under the banner “Never Again is Now,” clearly identifying the detention centers as concentration camps. Thousands of people have mobilized in protests across the country, such as the one in Chicago on Saturday which drew thousands of people into the streets. There were hundreds of “Know Your Rights” workshops around the country and small groups of immigrant defense groups are on standby to help migrants who are detained today. And perhaps most promising, we saw Wayfair workers go on strike against the sale of furniture to the concentration camps.

But, I’m sure we all know that this isn’t enough. It’s woefully not enough.

We need a national movement that organizes every single person who feels disgusted by the concentration camps and by the family separations to take to the streets. There are millions of us. Millions of us know these are concentration camps, and millions of us are against ICE, the family separations and the deportations. We need to be in the streets in coordinated, mass actions. Our bodies, in the streets, can make a difference. What good is it to have a new wave of people who identify as socialists if we cannot organize them to respond to even the most brutal attacks?

We need to bring back the “Day without an immigrant,” a strike that highlighted the immense profits that immigrants create for the capitalist class. And beyond that, workers around the country should follow the example of Wayfair workers and strike for immigrants’ rights.

And we need massive immigrant defense networks, much larger than the small groups that currently exist. Beyond just tweeting “know your rights” information, people like AOC and Ilhan Omar, well known for denouncing ICE and the conditions in the concentration camps, should be putting their bodies on the line and encouraging their millions of Twitter followers to do the same.

Even though “the Squad” has correctly voted against the border wall and ICE funding, they are stuck in their own contradiction. You cannot be on the side of immigrants in the party of the “deporter in chief.” It is not enough to abolish ICE. We need to fight to stop the deportations, all of them, whether they are organized by the Democrats or the Republicans. We cannot humanize detention centers; we have to shut them down. There is no such thing as a humane border policy; as long as there are fences, walls and borders, there will be an armed branch of the state that will use force to keep people out.

But no wall can keep us out. We are already here. We have always been here. Trump’s terrorism won’t keep us out and it won’t make us leave. It only unmasks the imperialist monster that is the United States and slowly, builds an army of those who want to fight against it.