Donald Trump Would Rather Wage War Against Protesters Than Tackle Racism

Faced with the immense mobilizations that have spread throughout the United States for days, the government decided to respond with more repression. On Monday, Trump threatened to deploy federal troops against those who continue to demonstrate. 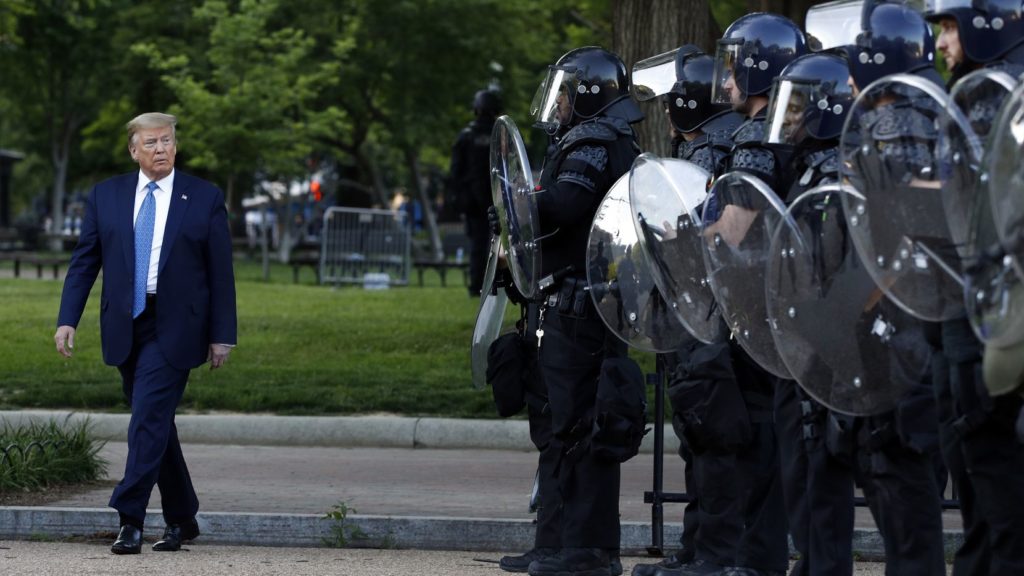 President Donald Trump made a statement on Monday calling for the streets in cities across the United States to be “dominated” by law enforcement — including not only police and state National Guard troops but also the U.S. military — in an overwhelming show of force against anti-racism protesters. He called himself the president of “law and order.” In a conference call earlier that day, he called state governors “weak,” demanding that they use the National Guard to take back the streets and demanding more arrests and long jail terms. He called protestors “domestic terrorists.”

In previous days he had hidden in a bunker in the White House basement and the lights at 1600 Pennsylvania Avenue had been blacked out like during the London Blitz of 1940. Meanwhile, as he spoke on Monday, the streets of Washington were occupied by thousands of people demanding justice for George Floyd. Cops attacked peaceful protestors right outside the White House with tear gas and flash grenades.

While Democratic leaders such as Minneapolis mayor Jacob Frey, Minnesota governor Tim Waltz, New York governor Andrew Cuomo, and New York City mayor Bill De Blasio had previously rejected Trump’s plan to deploy  military police in U.S. cities. they have not hesitated to use local and state  police and the National Guard to suppress the massive protests against police brutality and racism that continue in more than a hundred cities. Across the country, more than 3,000 protesters have been arrested. Many protesters have been injured in the brutal police offensive. In Louisville, Kentucky, a Black man named David McAtee was shot and killed by police, and his body was left in the street for 12 hours. Journalists have also been attacked by the police; in Texas, a reporter lost an eye after being shot.

Meanwhile, as protestors continue to demand justice for George Floyd, only one of the four killer cops is in jail for Floyd’s murder.

At the same time as he calls the protesters “terrorists,” Trump continues to add fuel to the racist attacks by the right-wing and white supremacists that have been revealed as part of the crowds  in several cities. As they contribute to  the police violence, they are seeking to spark a new civil war. Notably, Trump did not call the armed right-wing terrorists when they were demonstrating for reopening states, and he makes mention of them now as they attack people in the streets. As for the Democrats, many of them cynically call for “peace” and an end to the violence, but they line up behind unloading all the state repression against the demonstrations under the cover of “outside agitators.

The streets are being taken today in the name of justice for George Floyd, Breonna Taylor, Ahmaud Arbery, and all the Black people killed by police brutality. We must reject the curfews. We must demand the immediate release of all those arrested at the protests. We must continue to “dominate” the streets.We must organize this anger so we make sure those responsible pay. It is time for the unions to join with community organizations, essential workers, activists, and the broader social movements in a mobilization against repression and against the curfews.

Our movement has only just begun.

Stop the curfews! Stop the repression!

Justice for George Floyd and all victims of police violence!