Don’t Call it a Comeback: U.S. Labor Finds Its Groove after a Dismal Summer

After a summer of relative labor peace, the United States has seen four major work stoppages in just the last three weeks. Meanwhile, tens of thousands of workers are primed to walk out in healthcare and film/TV production if their demands are not met. It’s militancy at a level unseen for years. Could it be the beginning of something bigger for U.S. labor? 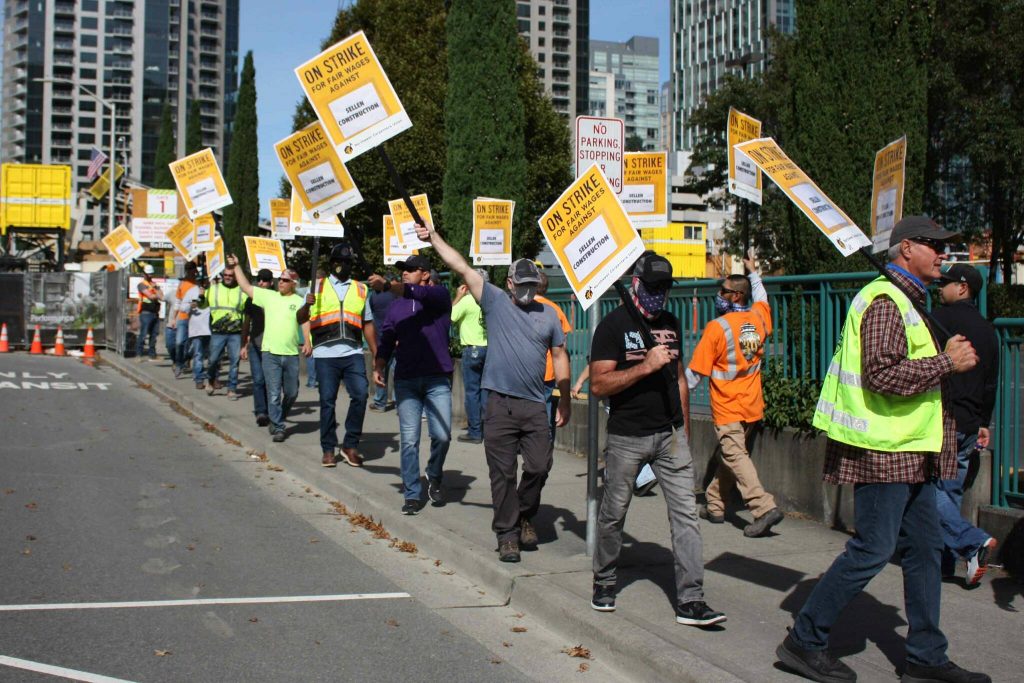 By most measures, 2021 has hardly been a banner year for labor struggle. Though it came in like a lion, with seven major work stoppages between January and April, up until last month there had been only three more such strikes since May, involving just 4,000 workers in total. Indeed, until recently, 2021 was primed to be one of the years with the fewest work stoppages this century. And yet, in just the last month, there have been four additional major work stoppages — two in just the last few days — and several other unions, including more than 60,000 workers in film and television, seem primed to hit the picket lines this week or next. Considering this new wave of strikes, 2021 could turn out to be a high point for labor struggle after all. But don’t call it a comeback — we’ve been here for years.

While there are no doubt several reasons for the precipitous fall in labor struggles earlier this year, it seems clear that the ups and downs of the ongoing pandemic and the U.S. economy are having an outsized influence on labor militancy. In January and February, as the economy began to slowly recover from the initial waves of the pandemic, and demand continued to increase, workers found themselves suddenly in a position of leverage. Though unemployment was high, so was the number of openings, and many workers were refusing to return to dangerous workplaces for low pay. As Luis Feliz Leon and Dan DiMaggio explain in Labor Notes: “Draconian surveillance, massive overtime, short-staffing, two-tier contracts,” and other forms of hyper-exploitation have made U.S. workers less willing than ever to accept such jobs. At the same time, extended and enhanced unemployment benefits allowed millions of workers the flexibility to keep looking for higher paying work, forcing employers to offer higher wages, increased benefits, and even signing bonuses in some industries, particularly the service sector, where job openings were highest.

Meanwhile organized labor, which had been fighting and mobilizing for safe workplaces since March, was feeling more energized and organized than ever, and as new coronavirus cases began to decline, unions took advantage of that increased organizing capacity — and the increasing militancy of a restive rank and file, tired of months of being overworked or understaffed — to fight for better contracts. The Hunt’s Point strike, the Volvo strike, and the strikes at Columbia and New York Universities all involved, on one level or another, an increased militancy among the rank and file. At Volvo, members rejected not one but two contract offers from the bargaining team, while at Columbia, graduate students organized outside the official union bureaucracy in a successful bid to reject the UAW’s tentative agreement with the university.

This seeming wave of renewed labor struggle came to a sudden halt, however, when the Delta variant began to spread throughout the United States in July, reducing the demand for workers, in the service sector in particular, and forcing many unions to re-prioritize struggles around reopenings and workplace safety. This was particularly true for healthcare workers and teachers, who have been some of the most combative unions since even before the pandemic began. But now, as the number of new cases continues to fall, workers are less willing to settle for concessionary contracts, knowing they can win more on the picket lines. And as the country slowly recovers from this latest outbreak, unprecedented numbers of workers are holding strike votes, and the vast portion of them are voting yes.

Last week, for instance, John Deere workers at manufacturing plants in Iowa, Kansas, and Illinois, narrowly avoided a strike after a strike authorization vote taken earlier that week led to a contract proposal from management. Workers there are expected to vote on the new contract proposal by October 10, but many say they are unhappy with what’s on offer, and a strike is still a very real possibility. In Oregon and California, tens of thousands of nurses and healthcare workers at Kaiser Permanente Hospitals are also voting to authorize a strike. And on Tuesday, more than 60,000 film and television industry workers organized by the International Alliance of Theatrical Stage Employees voted 98 percent in favor of a strike unless their demands for safer workplaces, better wages, and more flexible hours are met.

Though it’s near impossible to find good data on the actual number of strike votes passed (the Bureau of Labor Statistics seems to think anything less than a strike of 1,000 workers is not worth recording), there are currently many other unions holding such votes to try to win better contracts even without strikes. Considering that the credible threat of a strike is often as difficult to pull off as a strike itself, such negotiations are an important part of the calculus of the health, strength, and militancy of the labor movement.

And the events of the last few weeks suggest that a major uptick in labor struggle is already underway and likely to continue. In September, more than 2,000 carpenters in Seattle shut down construction projects across the city for almost twenty days before settling a new contract. Last week, 2,000 healthcare workers in Buffalo, walked out for safer staffing and against two-tier wages and benefits. Meanwhile workers at Kellogg’s brought U.S. breakfast cereal production to a halt on Tuesday, as 1,400 workers walked out of the factories after the owners threatened to send their jobs to Mexico. And on Thursday morning, 2,000 telecom workers, members of seven locals of the Communications Workers of America in California walked out, over unfair labor practices. That’s three major work stoppages in October already, and it is quite possible that Kaiser-Permanente nurses and the IATSE could also walk this month.

Such a number of ongoing major strikes would be unprecedented in recent memory, and could be just the catalyst needed to put the working class back on the offensive. With consumption of products and services continuing to soar after the latest outbreak, supply chains tied up across the world, and a growing demand for labor, working people have a real opportunity to force major concessions from capital in the coming period. Doing that, however, requires not only a confrontation with the boss, but with the bureaucracies of the major unions that have bound organized labor to the Democratic Party, and which, despite rising unrest, have played a demobilizing role in several recent strikes and union drives. In this sense, organizing the rank and file from the bottom up in order to build independent, democratic, militant unions is the best way to sustain and build on this latest wave of labor struggle.