Don’t Fall for the Copaganda: They’ll Take A Knee, Then Tear Gas Thousands

Cops in cities across the U.S. are marching in protests and taking a knee in “solidarity” before continuing to attack demonstrators. These empty acts of “copaganda” obscure the racist violence of the police, and serve to diffuse the protests. 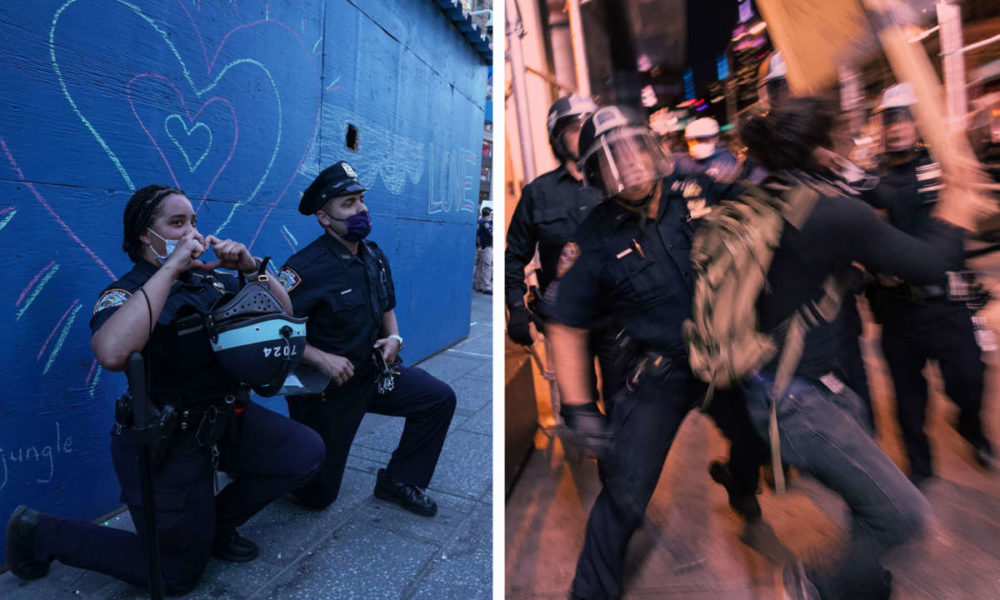 Amid growing protests across the U.S. against the racist murder of George Floyd by the Minneapolis police, cops in several cities have shown “solidarity” by taking a knee and participating in demonstrations. Images of these acts, including cops praying, and shaking hands with and hugging protesters have proliferated on social media and mainstream news networks where people are keen to show “good apples” in the police force. However, these hollow acts are a tactic to undermine the protests, and obscure cops’ violent role as unreformable tools of capitalist oppression.

Police have performed acts of “solidarity” at numerous protest sites, from Washington state to Des Moines, Iowa to Southern Florida. A picture from Schenectady, New York shows police officers solemnly taking a knee across from protesters doing the same, raising a fist in the air, and dutifully documenting this “copaganda” on their smartphones. In New York City, some protesters went as far as to cheer and thank cops who prayed with and hugged protesters. Even in Ferguson, Missouri, site of the 2014 uprising in response to the murder of Michael Brown, cops marched with protesters and kneeled for photo ops.

These videos and photos are being played on a loop on CNN and MSNBC in an attempt to improve the public’s perception of the police. Predictably, liberals and bourgeois media are lapping the images up, calling them “moving” and “heartfelt.” Many protesters also reacted positively, including Seattle musician Raz Simone who said, “I feel like it’s been a great success… Nothing has changed in a day. But… I think it’s beautiful that everybody is out here in unity.” This is a key tactic set up by the capitalist media and the Democratic Party: To diffuse anger at the police, and give symbolic (and irrelevant) concessions like cops joining the protests and saying that they, too, believe Black Lives Matter.

These images of “solidarity” reaffirm liberals’ view that the police is a legitimate force for good, but a few “bad apples” require discipline or training. From this perspective, there is no need for police abolition; rather, we just need to increase the number of “good apples” and encourage toothless oversight measures. Sectors of the cops have taken this approach — performing “solidarity” — not because they are against police brutality, but because it is a way to co-opt the demonstrations and dilute the strongly anti-cop message. Make no mistake, this is a way to end the current uprising. It is the “carrot” to pacify the movement, while cops simultaneously use the “stick” of violence and curfews.

An examination of the police’s brutal actions within minutes of these photo ops lays bare the cops’ motivations. Journalist Touré documented on Sunday how leaders at the Barclays Center protest in Brooklyn invited police to kneel with them and even handed them the microphone. However, within 15 minutes of the speech, the police were once again “in attack mode,” tear gassing protesters and violently taking some into custody. This took place across the United States: the locations where cops took a knee later became sites of intense police brutality by the same officers, a fact conveniently omitted by bourgeois media.

The police continue to violently repress protesters and act with impunity, regardless of their empty acts of “solidarity.” They have used tear gas, pepper spray, and rubber bullets, driven SUVs into crowds, and brutally tackled people to the ground, whether they are protesters, medics, or journalists. On Monday morning, police in Louisville, Kentucky murdered David McAtee, a 53 year-old Black man. Despite the systematic police brutality on display in U.S. cities, bourgeois politicians and the media have overwhelmingly overlooked it, in many cases defending these tactics.

The police are the targets of the current demonstrations. No amount of arm-linking, fist-bumping, knee-taking, or speech-making will change this fact, and spreading “copaganda” will only perpetuate the myth that “good apples” are the solution to police violence. The police are a fundamentally violent and racist armed wing of the state whose primary purpose is to protect capital and reproduce inequality. We must abolish them, along with the racist, capitalist system they are meant to protect.