At least 109,000 people have signed up for the “Don’t Pay UK” campaign and are set to refuse to pay their skyrocketing energy bills in October. 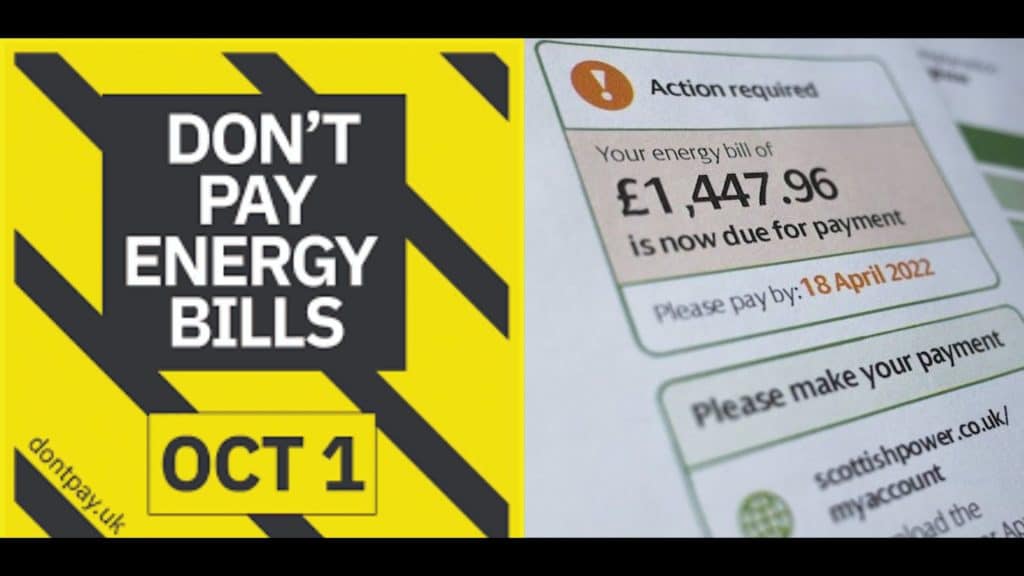 At least 109,000 people have signed up for a campaign to refuse paying rising gas and electricity bills in the United Kingdom, and hundreds of thousands of other Britons are expected to do so in the coming weeks. The exponential increase in energy costs as a result of inflation, — which sits at 9.1 percent, the highest level in 40 years — and the war in Ukraine means that millions of people have to choose between heating or food in the approaching winter.

Meanwhile, energy companies are recording enormous profits: BP made $8.5 billion in profits in the second quarter alone, of which it plans to distribute nearly $5 billion to shareholders.

It is in this context that the Don’t Pay UK campaign was launched in June 1. The campaign calls on at least one million people not to pay for their electricity and gas bills starting October 1 if these bills are not reduced to an “affordable” level.

This is not the first time that Britons have engaged in a non-payment strike. As the campaign itself points out:

Mass non-payment is not a new idea, it happened in the UK in the late 80s and 90s, when more than 17 million people refused to pay the Poll Tax – helping bring down the government and reversing its harshest measures.

This episode refers to the mass disobedience in response to the Poll Tax and the Poll Tax riots, the largest riots seen in central London in the second half of the 20th century. Over 100,000 people protested against this direct per-person tax that would charge the same regardless of income. The government of Margaret Thatcher eventually fell, spurred by the debacle.

The parallels between the government of Boris Johnson and that of Thatcher don’t end there: the current Prime Minister also takes after Thatcher’s anti-union actions and repression. The protests and labor mobilizations of this past summer also compare with those years.

In Britain, we have seen strikes in railways, airlines, telecommunications, and other industries all in response to the crisis caused by inflation. Living costs have soared for working families, who now have to pay more for food and other essentials.

More than 50,000 railway workers were called to strike for three days by the National Union of Rail, Maritime and Transport Workers (RMT), together with the London Underground staff. 1,900 dockers could also go on strike for the first time at the port of Felixstowe, the UK’s leading freight port.

In the postal service, 96.7 percent of the 115,000 members of the Communications Workers Union (CWU) voted in favor of what is expected to be the summer’s largest strike in the country. The strikes are scheduled for August 26 and 31 and September 8 and 9. Meanwhile, hundreds of thousands of nurses in England and Wales are set to vote next month on whether to go on strike. The Royal College of Nurses (RCN) union is demanding five percent above the retail price index inflation rate (11.8% in June), i.e., a total increase of 16.8 percent.

Along with its criticism of the Don’t pay UK campaign, the UK government last month repealed a law prohibiting companies from hiring temporary workers to break. A measure in direct response to the workers’ strikes of recent weeks in the UK. This new law, which will also be applied in Scotland and Wales, would deem trade unions guilty of “illegal strike action,” and subject to a fine which has quadrupled from from £250,000 to £1 million ($1.85 million).

A New Winter of Discontent?

Similar energy price increases are expected across Europe, meaning that millions of people face winter without being able to pay for electricity or gas while runaway inflation eats into wages. In Germany, too, the government announced a two-fold increase as of October 1, while the Spanish State has made similar increases.

The Don’t Pay UK campaign could be a point of support to fight for price controls through workers’ and consumers’ committees throughout supply chains of all essential products, from production, to distribution, to sale. These demands must be combined with the fight for wage increases in line with inflation, as well as the fight against war, rearmament, and economic warfare in the form of sanctions.

In the same way, we must fight for the nationalization of the big electric companies and public utilities — without compensation — under workers’ control. In turn, those who cannot pay for these essential services could have access to low or free tariffs.

First published in Spanish on August 17 in La Izquierda Diario.