The social media campaign “Settle for Biden” is just the latest version of the Democrats’ lesser evilism campaign. They want to convince us that Biden is our only option for defeating Donald Trump. The truth is that Biden and Trump are just two sides of the same capitalist coin. Only the working class can get rid of the oppression that they represent. 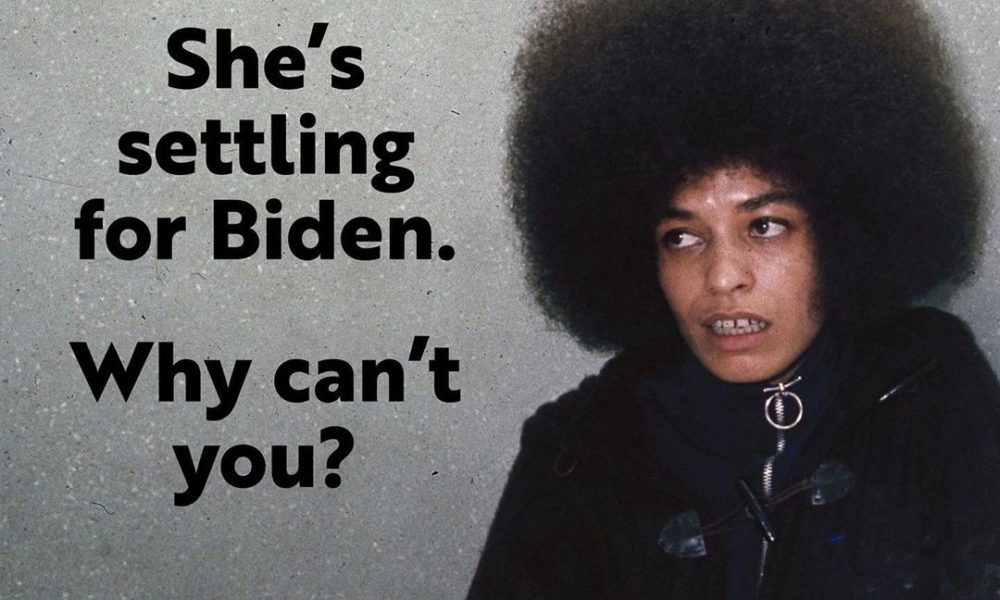 In the past few weeks, the “Settle for Biden” social media campaign has taken the internet by storm. The campaign features primarily Instagram and Twitter posts along the lines of one that says “If Biden died, I wouldn’t shed a tear. But I will sure as hell vote for him if it means getting rid of Trump.” Other posts include images of Noam Chomsky and Angela Davis as well as one with the New York Times headline “I believe Tara Reade. I’m voting for Joe Biden anyway.” The thesis of all of these posts is clear: Biden is no saint but he is “angelic compared to Trump” so we should all vote for him to get Trump out.

Initially there was rampant speculation that the campaign was a joke but, surprisingly, it is a real organization made up “primarily of former Bernie Sanders and Elizabeth Warren supporters” who “firmly believe that Donald Trump is an existential threat to the future of our people, our nation, and our planet. [They] don’t like all of Joe Biden’s policies but [they] recognize that he is running on the most progressive platform in American history and that not supporting him would literally endanger the lives and livelihoods of millions of Americans.”

What this campaign reveals is that, as many expected, the Democrats and their cronies are once again trotting out the narrative of lesser evilism. They are doing what they always do: trying to drive a social movement out of the streets and to the polls. “You hate Trump” they say, “therefore you must vote for whichever racist, abusive, capitalist politician we put before you because he’ll be better than the Republican.” But the current movement — like movements of the past — is proving that narrative to be nonsense. In most cases, it is the Democratic mayors and governors who are unleashing violent repression on protesters. There was no lesser evilism for the protesters who got shot by police or the thousands who got gassed and arrested. No protester stopped choking on tear gas to thank their lucky stars that it was Democrats and not Republicans who shot the tear gas.

This campaign also reveals what an uninspiring candidate Joe Biden is in the current moment. As protesters begin to take up more radical demands — such as canceling rent and abolishing the police — Biden’s candidacy represents a victory for the right wing of the Democratic Party. He argues against Medicare for All during a global public health crisis and calls for police to shoot suspects in the leg as a response to a movement against police brutality. For all of his bluster about Trump, Biden’s own record shows that he is anything but an ally of Black people. He is a life-long proponent of making the criminal justice system in this country even more oppressive and racist. He is a die-hard imperialist. As protests on the street proclaim that Black Lives Matter, the Democrats want us to vote for a man who has shown time and time again that, to him, they do not. Biden’s failures as a candidate are being concealed by increasing the focus on Donald Trump. This is why the “Settle for Biden” campaign is interesting: because it does away with any pretense that Biden has good politics. They aren’t trying to claim that Biden will do anything good — just that he will be less bad. As one meme on the Settle for Biden twitter puts it: “Joe Biden will hurt the environment less than Donald Trump.”

What this campaign — and the larger lesser evilism argument — accepts is that we will have to lose something. We have to compromise our beliefs in order to prevent something worse happening. The issues with this argument are two-fold: first, nothing in history has shown us that the Democrats are actually better for working people than Republicans and second that it limits us to the ballot box. If we want Trump out, we can organize and get him out, just as the people of Puerto Rico did with their Governor last year. Protesters didn’t have to wait around to hold their nose and vote for an uninspiring candidate in order to get rid of their governor. Rather, they took the streets, went on strike, and stayed fighting until the governor resigned.

The Democrats want to make us believe that the only way to fight Trump is to vote for Biden — but that simply isn’t true. The fight for socialism is a fight against the economic system of capitalism and all of the elements that prop it up: the police, landlords, imperialism, and the state itself. Through the fight for socialism, we can build a force that is strong enough to overthrow the capitalist state and all of their politicians. We don’t need to choose which one we’d like to oppress us — we can fight them all.

It is important in this discussion to be clear that Donald Trump is an authoritarian racist whose dangerous rhetoric emboldens the extreme Right and whose policies have put countless working-class people of color in danger. His presidency has been disastrous and his handling of the current twin crises of the coronavirus and economic collapse is criminal. But to claim that he is some sort of anomaly is to ignore how the system of capitalism works. Capitalism relies upon the state to resolve class conflict in favor of the rich and powerful. Because of this, the job of the President of the United States is to uphold the system of capitalism, enforce oppressive laws, and protect imperialism around the world. This is the reason the state exists and every president has played his part in upholding the American state. In this, there is little difference between Trump and Biden. Both men are united in wanting to put down the current protests, continue U.S. domination of the globe, and force the working class to pay for the current crisis. When we say that one is as bad as the other, this is what we mean: both men will protect the system of capitalism at all costs. While their tactics to protect capital may vary, they are both working towards the same goal.

Trump has certainly been more brazen about his disregard for working-class people of color. But we cannot forget Bush’s wars, Obama’s deportations, or Clinton’s gutting of welfare. Joe Biden will not get us closer to racial justice because he wants to maintain the system that is killing and impoverishing people of color across both the U.S. and the world. Settling for Biden means accepting the continued bombing of the Middle East, the continued murder and imprisonment of Black people, and the coming austerity measures in response to the economic crisis. Settling for Biden means accepting what we cannot accept. Do not settle for a bourgeois politician — fight for socialism!