Down With the Right-Wing Coup in Bolivia! 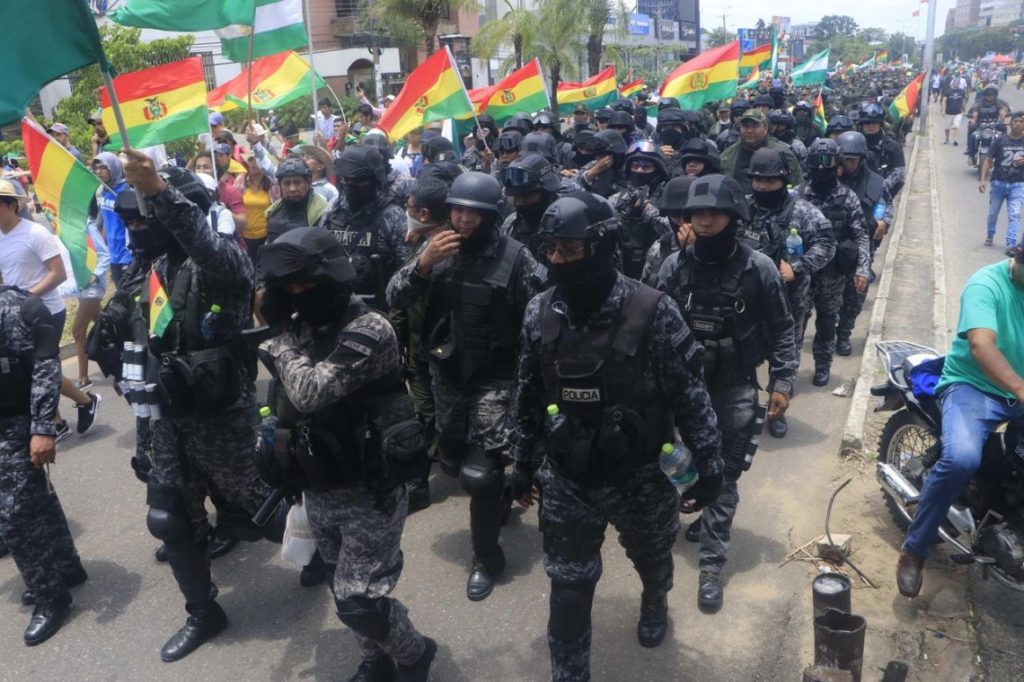 In a press conference on Sunday, Bolivia’s armed forces endorsed a coup that had been developing since the general elections on October 20. An hour later, Evo Morales announced his resignation from the presidency after 14 years in power.

During the first round of the hotly-contested election, the supreme court stopped the broadcast of vote-counting for 15 hours. By the time the live transmission resumed and the results were announced, Morales had declared victory.

In response, different sectors took to the streets to protest the election results. Former president and opposition candidate Carlos Mesa led the right-wing mobilizations. Some of the most reactionary sectors of society—those most tied to imperialist interests, like the agribusiness sector—formed a “civic opposition” concentrated mainly in the area of Santa Cruz. They called for a coup to oust Morales with the support of the police and the army.

The heterogeneous composition of the opposition block cannot conceal the strong presence of right-wing groups such as the Cruceñista Youth Union, reactionary anti-abortion groups, and the evangelical churches with a racist and homophobic discourse. At the same time, important layers of workers began to distance themselves from Morales’s government. Workers’ assemblies in La Paz and Cochabamba in recent days had proclaimed they were neither with Morales nor with Mesa.

Luis Fernando Camacho, an ultra right-wing civic leader, capitalist, and outspoken opponent of Morales, traveled to the Government Palace in La Paz this week to deliver a Bible and a pre-written letter of resignation for Morales to sign.

The Organization of American States (OAS) joined this right-wing movement in denouncing Morales’s narrow win and declared the results illegitimate. They claimed that his victory “generates loss of confidence in the electoral process.” The international organization, which is led by the U.S., pressured Morales to accept a recount by the OAS, on the condition that its results be binding.

The world’s imperialist powers, from the U.S. to the European Union and the United Nations, quickly lined up behind this proposal, voicing support for Morales’s challengers. Assistant Secretary for the U.S. Department of State’s Bureau of Western Hemisphere Affairs, Michael G. Kozak, legitimized the coup attempt, tweeting: “We support the call for new elections & a credible, representative Electoral Supreme Court (TSE). All those implicated in the flawed process should step down.” The role of imperialism was key in other attempts to overthrow Morales, as in 2008 when the same sectors mobilized against the government’s limited land reform.

Earlier this week, there were police uprisings in almost all major cities. Police officers wearing masks came out, fully armed, in support of the Right. The armed forces had not yet taken a side in the conflict. But after the OAS invalidated the election results, they moved to the side of the coup.

In response, Evo Morales called for new general elections and announced the renewal of the TSE (Electoral Tribunal). He also tried to quell the growing unrest by saying: “I want to ask everyone to lower all the tension.” But Morales’ announcement could not prevent the advance of the civic, police, and finally military offensive.

As a result, governors, ministers, and other officials began to resign. The union federation COB, which has been under the wing of Morales for years said, “in order to pacify the country the resignation of the president is necessary, then let him resign.” This ended up being a tipping point in the balance of power.

From the United States, Mike Pompeo also supported the right wing and the ousting of Evo Morales. He tweeted:

Fully support the findings of the @OAS_official report recommending new elections in #Bolivia to ensure a truly democratic process representative of the people’s will. The credibility of the electoral system must be restored.

Faced with the danger of a coup, Morales had urged his supporters to have faith in the OAS and the democratic process. His policy of appeasement undoubtedly strengthened imperialist interference in Bolivia.

In the past years, Morales has had a conciliatory policy toward agribusiness, while governing on the basis of authoritarianism and a cult of personality. The only way to stop the advance of the right and solve the problems of the working class and indigenous peoples is via mass mobilizations, self-defense, and self-organization. Instead of supporting the resignation of Evo Morales to “pacify the country,” the COB and the social movements must call for resistance against the right-wing coup.

The Revolutionary Workers League—Fourth International (LORCI) has been fighting this right-wing assault since it began on October 20th. The Trotskiysts repudiate this police-military-civic coup at the service of churches, agribusiness, and imperialists. As the LORCI wrote on Sunday morning:

In the face of this reactionary offensive that could acquire a coup dynamic in the coming hours, we believe it is urgent to advance in the self-organization of the workers of the countryside and the city. We must go against the conciliatory policy of the corrupt and completely state-controlled leaderships of the workers’ movement. We must take the struggle for our demands into our own hands—demands that were postponed by the MAS government after an agreement in 2008 with the current opposition. Only by taking back our organizations and building an alliance of workers, peasants, and poor people will we be able to oppose the reactionary alliance of industrialists, churches, and civic, liberal and conservative politicians. Only with self-defense committees against racist violence, will it be possible to stop the right-wing rebellion and defeat the coup.