On June 29, NYC-DSA and DSA AfroSocialist and Socialists of Color Caucus, along with members of the left, community organizations, and the labor movement, will lead a march in New York City against racist police violence and the racist system it protects. 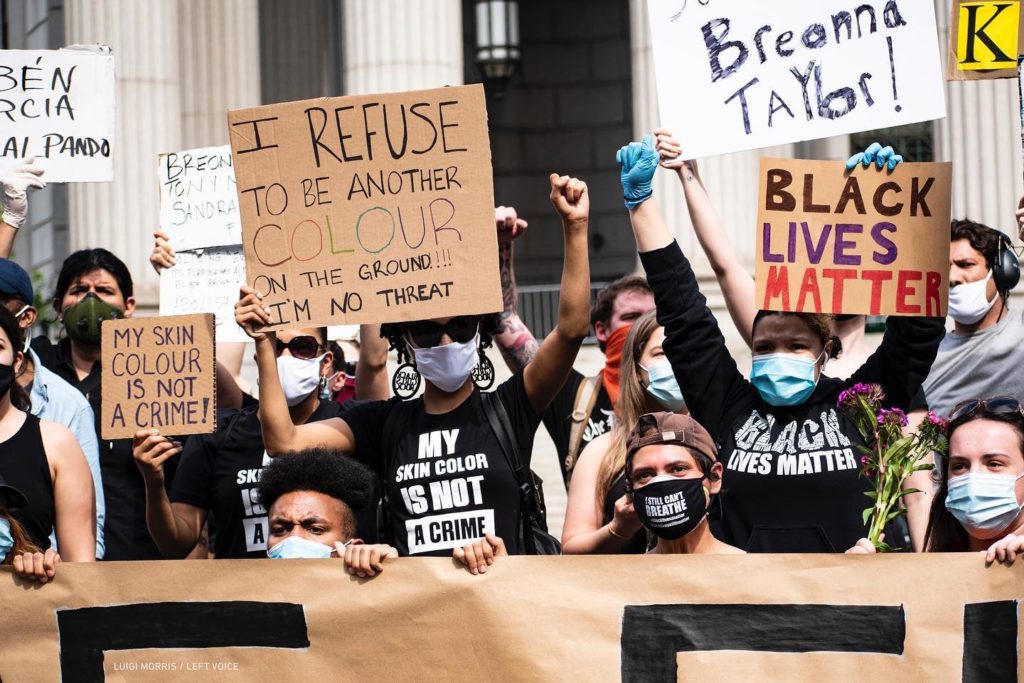 This Monday, June 29, NYC-DSA and DSA AfroSocialist and Socialists of Color Caucus, together with the support of community organizations, left organizations, and members of the labor movement, are leading a march in New York City to demand the defunding of NYPD and the abolition of the police. This action is organized in solidarity with the movement against police brutality rippling across the country and with Black and brown communities, queer and trans* communities, and all other working class communities who are the targets of state terror.

The march is being held in anticipation of the vote for New York City’s 2020 budget by city council on June 30. The proposed “austerity” plan is slated to make massive cuts to funding for education and healthcare while leaving the massive budgets of the NYPD and the Department of Corrections intact. We march in recognition of the fact that every cent that goes to the police department and the carceral system goes towards the racist oppression of communities of color and the maintenance of a system that ensures the exploitation of the entire working class. There is no reforming the police. The only way to put an end to the systemic murder of people of color at the hands of the cops is to get rid of policing in all its forms — from ICE to prisons to cop unions — and along with it the entire system of capitalism it protects. Taking up the call to abolish the police, we state clearly that the struggle against police terror and the fight against capitalism are one and the same.

The march is also organized around the demand to “Free the Three” protesters who are imprisoned in New York City and are facing outrageous federal charges on the orders of the Trump administration. Colinford Mattis, Urooj Rahman, and Samantha Shader are all being denied bail as they face potential life sentences for alleged property destruction during Black Lives Matter protests in May. Their imprisonment is just one more example of the repressive measures being taken by the state to suppress the uprising and pacify the protests. We demand the immediate release and dropping of charges against all arrested protesters and political prisoners, as well as the closure of jails like Rikers in New York City that imprison thousands of people.

Monday’s action calls on broad sectors of the Left, community organizations, the labor movement, and all those who will stand up against police terror and the racist capitalist state. We must join together to kick cops out of our unions, out of our schools, and out of our communities.

The march will gather at Washington Square Park at 5pm. More details can be found on the Facebook event page. Organizations that wish to endorse the event can sign up here.

Reproduced below is the press release for the event:

“We call on the NYC community and the labor movement to join us at 5pm on Monday, June 29th, in Washington Square Park for a rally and Mass March to Defund the NYPD & Abolish the Police. We are proud to stand in solidarity with Black people, queer people, immigrants, the youth, and all other members of the working class who have been, for generations, targeted, harassed, and murdered by the police.

Let’s join together, on the eve of the NYC city council meeting that will determine the budget, to raise our collective demands to defund the NYPD, re-invest in communities, get cops out of unions and schools, defund the Vice Squad, close Rikers, free Colinford Mattis, Urooj Rahman, Samantha Shader and all other political prisoners, disarm and demilitarize the police and hold them financially liable for their misconduct, pass an Elected Civiliain Review Board, end collaboration with ICE and DHS agencies, decriminalize drugs and sex work, fight for the rights of protestors, and tax the rich and Wall Street.

We demand that the NYPD be defunded by at least $3 billion dollars, that the police force be cut in half, and that the money cut from the budget be reinvested into communities. As the uprising in reaction to George Floyd’s recent murder has shown, the working class doesn’t need police and they don’t keep us safe. The NYPD was made to oppress us in defense of a racist, exploitative status quo. But we resist. We call on folks from across NYC to stand with us on June 29th to say, once and for all, that we have no need for police. Our communities are safer without them. We want cops out of our schools, out of our unions, and out of our communities.

The current movement carries on the legacy of the Black radical tradition, from the Black Panthers to Ferguson. It is led by people of color, by young people, by queer and trans* people.  We are united to demand that our voices be heard and that we put an end to this racist capitalist system. We also recognize that this is Pride Month and we call on comrades from all walks of life to carry on the fighting spirit of the Black trans* leader Marsha P. Johnson.