A proposed resolution urges the DSA to organize a nation-wide mass strike “when Roe v. Wade is challenged at the Supreme Court.” The resolution will be voted on at the DSA’s upcoming national convention. This could be the starting point for the kinds of mass actions needed to stop the right-wing offensive against reproductive rights. 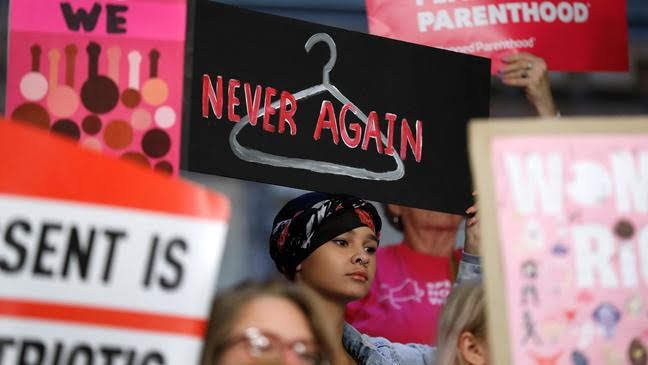 As working people around the world (in Poland, Argentina and Ireland) continue to struggle for access to abortion and other basic reproductive rights, those very same guarantees are once again under attack in the United States, where a series of new legislation is threatening already-weakened protections against a ban on abortion and other reproductive choices.

Supported largely by right-wing Republicans, these laws, which were recently passed in Alabama, Georgia, Missouri and Louisiana, have also received a fair amount of support from Democratic politicians. In fact, the Louisiana “heartbeat” bill was signed by Democratic Governor John Bel Edwards just a little more than a month after House leader Nancy Pelosi declared that abortion would not be a litmus test for party endorsements. While these bills claim to protect the lives of “unborn children,” their real purpose is to limit reproductive freedoms by first curbing and eventually directly challenging the right to an abortion under the U.S. Constitution. Although a rollback of Roe v. Wade had been previously unthinkable, the new composition of the Supreme Court and the rise of a reactionary right-wing politics represented by the election of Donald Trump have undermined such complacencies, and a serious constitutional challenge to the right to an abortion seems not only possible but likely.

As the threat to Roe v. Wade looms ever larger, the need for radical, independent working-class action is clear. The right to reproductive justice of all kinds, including abortion, is fundamental for the liberation of women, trans people and the working class more broadly and must be defended by all means necessary.

Rather than relying on electoralism or lobbying, socialists should help build massive movements and strikes like those in Argentina, Iceland and Poland. This is why Left Voice has called for a Real Strike to Fight for Abortion Rights, one that brings together all sectors of the class to struggle for access to reproductive options for everyone, including free and safe abortions on demand.

A reproductive justice framework means viewing the struggle as more than just free abortion on demand, but also fighting against prisons, for immigrants rights and police violence that brutally bar some people from the right to parent their children. It also means understanding that reproductive justice is not just a women’s rights issue, as trans and nonbinary people also have abortions.

In this spirit, more than 100 members of the Democratic Socialists of America (DSA) (including many involved in the Socialist Feminist Working Group) have recently thrown their support behind a resolution asking the national DSA to organize what they are calling a “Mass Strike for Reproductive Justice.” The proposal, which explicitly rejects the tactics of lobbying and fundraising, argues that we must instead “seize the control of our bodies with the means of our bodies.” The resolution will be voted on at the DSA’s bi-yearly national convention, which will take place in Atlanta over the weekend.

In place of dead-end lobbying, the resolution urges the DSA to prioritize organizing for a nation-wide strike capable of shutting down “key parts of the U.S. infrastructure when Roe vs. Wade is challenged at the Supreme Court.” The resolution proposes that this should be facilitated through the formation of a series of subcommittees tasked with doing research, building coalitions, publicizing the call for a strike and seeking endorsements from labor unions. It also calls on the national organization to specifically seek out the support and endorsement of radical unions, including unions that represent large numbers of women; unions that have already shown a willingness to take political action, such as the Association of Flight Attendants (AFA-CWA); and unions that represent workers in strategic choke points such as truck drivers and warehouse and longshore workers.

If approved at the upcoming national conference, this resolution, and the work it might lead to, could be an important part of a bigger struggle to defeat the right’s attacks everywhere as well as a watershed moment for the U.S. working class, which has not seen such a strike since before the second world war.

And indeed there is already an international movement on the side of this kind of resolution. In Spain, for instance, millions of people went on strike on International Women’s Day, and there were smaller strikes in other countries around the world. In Argentina, the socialist feminist group Pan y Rosas was able to play a role in organizing work stoppages among teachers as well as airport and factory workers. And while, as Cinzia Arruzza explains, the union bureaucrats have often come out against strikes organized by the international feminist movement, rank-and-file organizers have nonetheless been able to force some unions to call for strikes.

While it is encouraging to see the DSA calling for the active mobilization of national unions, especially sectors made up predominantly of women, (teachers, nurses and other care workers) U.S. labor unions in particular have not historically been open to such mass work stoppages. Because of this, any strategy to build a strike must also include a strategy for empowering union members to make demands on their leaders, even when those same leaders try to ban such actions. As we saw during the government shutdown, it took just one union, the AFA, to force the hand of the president to reopen the government. That tactic worked in part because of the special power of the flight attendants’ union to shut down air transportation, but also because of the threat of a larger nationwide labor strike that such an action might have ignited had the government remained closed. Getting even one union on board with a general strike for reproductive rights, such as National Nurses United (NNU), could be the spark needed to bring out huge sections of rank and file unionists.

However, while the AFA’s strike announcement was critical to forcing an end to the shutdown, it is important to remember that the decision—made almost exclusively by the union president Sara Nelson—was nonetheless taken within the much bigger context of sickouts by airport workers, who were already organically pushing toward an aviation crisis. In other words, Nelson’s home run, as it were, was the result of a slow pitch down the middle of the plate, one set up on part by rank-and-file workers already agitating outside the consent of their union leadership. Furthermore, there is a big difference between the threat of a strike in solidarity with workers in the same sector, and a planned national general strike on a question as controversial as abortion rights. Without a more militant, democratic labor movement, in which the rank and file have vastly more control over the day-to-day decisions of their unions, it is unlikely that any call for a general strike will come from labor leaders, even ostensibly radical ones.

Therefore, any attempt to build a mass strike or mass demonstration that includes labor unions and their members will have to avoid the pitfalls of appealing solely to elected representatives and union bureaucrats. Instead it will be necessary to seek to build support among unionized and non-unionized workers and within rank-and-file organizations and class-struggle caucuses capable of exerting the pressure needed to force the leadership to get on board, or more likely, to simply take actions independent of the leadership. Any strike built with the legal or bureaucratic permission of the state or of the labor bureaucracy that defends it, is doomed to failure or, worse, mere irrelevance, but a strike assembled from the bottom up, even one that mobilizes only a small portion of a given union or workforce, only builds the power of the working class.

Thankfully, the DSA does not have to rely upon the good will or organizing potential of big labor to build a fight for reproductive rights. The organization now has more than 55,000 members nationwide (even if many of them are merely paper members), with thousands of members in big cities like Chicago, Los Angeles and New York, capable of organizing and building, alongside working-class organizations and rank and file unionists, mass demonstrations and strikes.

Likewise, the DSA does not have to wait until Roe v. Wade is challenged, or close to being challenged, to take such actions. Building a militant movement for reproductive justice, one that transcends the endless lobbying and legal battles conducted by non-profits like the ACLU and Planned Parenthood, cannot wait. These laws have to be challenged directly in the states where they have been passed and in cities across the country. Therefore any call for a mass strike must begin with mass protests in New York City, Birmingham, Atlanta, Chicago, Los Angeles, and New Orleans. Such actions are not only necessary to defeat these terrible laws, they are, more importantly, the seeds of any future mass mobilizations or strikes.

Struggles for reproductive rights can and must be part of a broader struggle against capitalism and the vast inequalities and injustices it generates and feeds off of. Towards that end this resolution, which calls on working people to once again learn how to use their labor power to defend their rights, is a promising start.