As protests and military repression continue in Ecuador this week, the army threw all journalists out of the government palace. On Monday night, President Lenín Moreno fled the capital and announced the transfer of the seat of the government from Quito to Guayaquil. Now workers, indigenous communities, and students are gearing up for national strike. 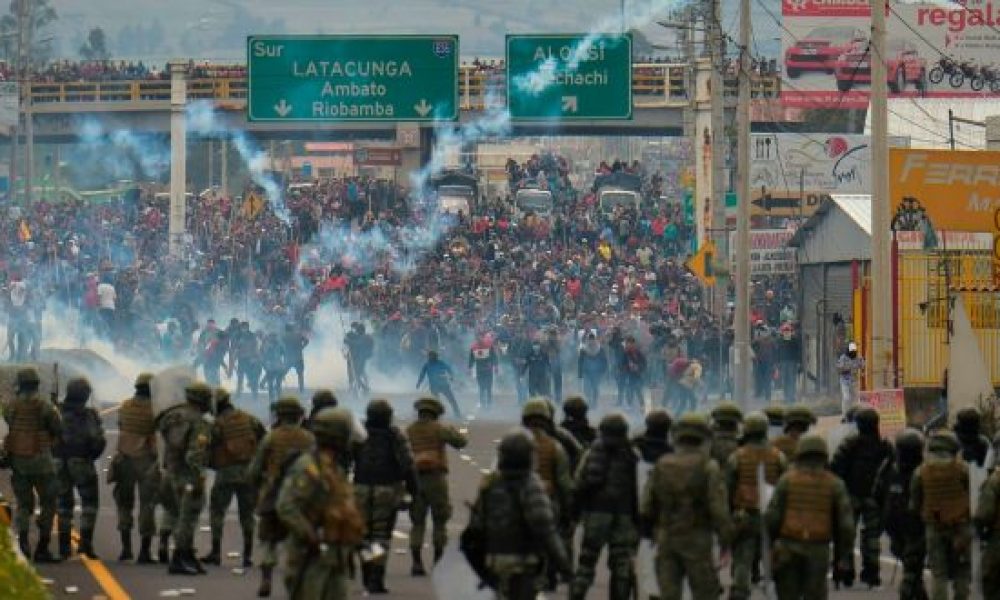 The massive protests against the economic reform package implemented by President Lenín Moreno and the IMF continue this week in full force. Last week’s declaration of a state of emergency and the brutal repression that followed—which resulted in the imprisonment of 500 people and dozens of wounded protesters—only aggravated popular indignation.

Meanwhile, tens of thousands of protesters from indigenous communities (organized in CONAIE, or the Confederation of Indigenous Nations in Ecuador), are currently marching toward Quito, Ecuador’s capital. In conjunction with Ecuador’s main union (Workers United Front, or FUT), they are preparing for a national strike and march on Wednesday.

In Quito, the army has surrounded the government palace with tanks in order to protect it from demonstrators and there have been intense clashes between protesters and the military in the streets of the city’s historic district. On Monday afternoon, Moreno was forced to cancel a scheduled speech and the military evicted journalists from the government palace “for their safety.”

The whole country has been rocked by this massive uprising, but Moreno’s position of power has undoubtedly taken the hardest hit. On Monday afternoon, he disappeared for several hours and there was speculation that he was planning to announce his resignation. Late on Monday, however, Moreno sent a message from the city of Guayaquil, far from Quito and the protests, in which he announced that the government would be conducting all activities from Guayaquil while the demonstrations continued. He also reaffirmed that he would not capitulate and reinstate fuel subsidies (the revocation of which sparked this last round of protests), called for open dialogue with protesters, and accused Venezuelan President Nicolás Maduro and former Ecuadorian President Rafael Correa of sowing unrest in the country.

The massive protests are not confined to Quito. In the north of the country, at least three oil fields controlled by the state-owned oil company Petroamazonas have been paralyzed by roadblocks and plant takeovers orchestrated by protesters demanding an end to fuel price hikes. 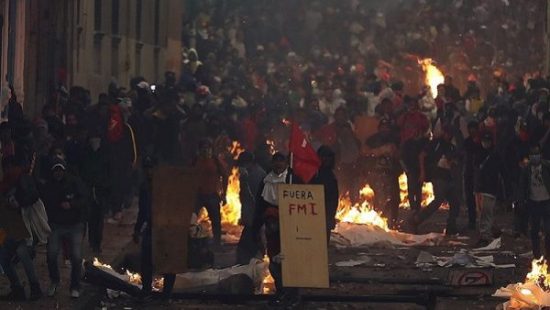 Widespread looting took place in multiple cities and the government declared a “contingency plan” to prevent shortages due to the roadblocks. Many markets in Quito have closed down due to possible incidents.

All attempts to quell the protests with repression have failed thus far, fueling the uprising rather than suppressing it. The brutal offensive by the military as it entered indigenous communities— throwing tear gas into houses, detaining community leaders, and prohibiting protests—has only magnified the mobilizations. At multiple points throughout Quito, military checkpoints that attempted to stop protesters from entering the capitol have been overcome by the large groups of indigenous people gearing up for huge mobilizations on Wednesday.

The crisis generated by the popular uprising is now beginning to concern U.S. leaders. Michael G. Kozak, the Acting Assistant Secretary for U.S. Department of State’s Bureau of Western Hemisphere Affairs tweeted: “The U.S. is monitoring recent developments in #Ecuador carefully.  We reject violence as a form of political protest.”

On Monday, Ecuador’s Supreme Court further showed how deep this crisis has become. As expected, it endorsed Moreno’s call for a state of emergency, repression, and the suspension of constitutional rights. However, it limited the state of emergency to only 30 days (though Moreno approved it for twice that amount of time), and declared that the “right to peaceful protest” had to be respected. Furthermore, it stated that security forces would be held responsible if they committed any abuses during the length of the measures. Though these statements make the demagogy of the Supreme Court clear, they also reveal the government’s weakness in the face of the protests and its inability to exercise sufficient repressive measures to combat this massive uprising of the people.

In an attempt to win the upper hand, President Moreno said to the CONAIE on Sunday that he was “ready to dialogue with you, indigenous brothers, with whom we share many causes. Let’s talk about how we can use the country’s resources for the ones that need them the most.” However, directly after this statement he reinforced the repressive actions against indigenous communities and reaffirmed his intention to carry out austerity measures.

Though the FUT and CONAIE bureaucracies have so far rejected any sort of “dialogue” with the government, they have also maintained close control of the mobilizations, limiting their demands to reversing austerity measures. Their leaders have dismissed or condemned expressions of popular anger and desperation, such as the looting that has taken place in response to the price hikes and the economic measures of the government and the IMF. The general strike and mobilizations scheduled for Wednesday will show whether the leaders of the FUT and CONAIE will stand with the protesters and continue the fight or de-escalate the protests in favor of the government, President Moreno, and the IMF.

Brought to power two years ago by then-president Rafael Correa on a promise of “continuity with change,” Lenín Moreno has turned rapidly towards the right. He aligned himself with the imperialist politics in the region and allied with the reactionary governments of Brazil, Argentina, and Colombia, among others. Now, after having dropped quickly from an approval rating of 70% to now just 30%, and with an all-out rebellion against his austerity measures, president Moreno is quickly becoming the first victim of Ecuador’s popular resistance.