Edward Snowden’s revelations about the NSA 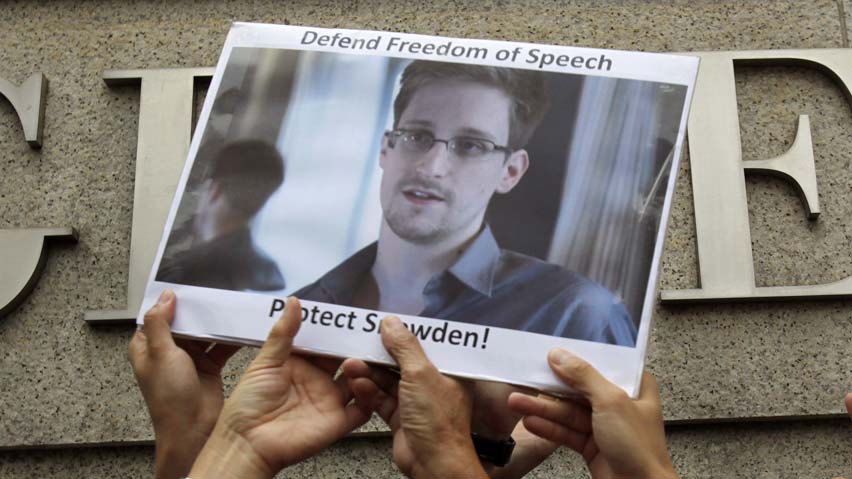 In January 2010, US Secretary of State Hillary Clinton made freedom of expression on the internet a cornerstone of US diplomacy. A position reaffirmed in February 2011, when the Secretary of State then recalled that “On the subject of freedom on the internet, we have declared ourselves on the side of openness.” In reality, US electronic surveillance exceeds, in length and breadth, the “electronic Great Wall of China” or the Iranian mullahs’ surveillance.

This is what Edward Snowden, a former agent of the NSA (National Security Agency) has just revealed. The electronic surveillance programs Upstream and PRISM of the NSA collect, process and analyze almost all of the world’s communications, with the complicity of the big US firms (Google, Microsoft, Yahoo, Facebook, Skype, Apple, AOL…). To this is added widespread wiretapping of the US population, but also, of the world’s population, the planting of microphones in the buildings of highly-placed European officials, in 38 embassies in Washington, DC, electronic attacks against Iran or China… in summary, Big Brother’s means in George Orwell’s futuristic novel, 1984, from now on, seem miserable and definitely surpassed. The irony is enormous, if one considers that the United States bases its propaganda on its population as being the defenders of freedoms. In the name of what would that country exempt itself from respecting the principles that it demands be applied everywhere else?

The verification of our worst suppositions and theories is terrifying at times. Certainly, the existence of a program of global spying on telecommunications in the hands of the United States, was already known a long time ago. The ECHELON program has openly talked about it since the 1990’s. It was officially presented as a system of interception of telephone communications and mail, thanks to a system of keywords and tone of voice recognition. Its aim was presented as being purely military. It was known that the French state did the same thing on a smaller scale (“Frechelon”).

The “Snowden affair” provides irrefutable proof that the aims of the NSA go far beyond “military targets.” In terms of information, it could be said that the distinction between military, diplomatic, civil intelligence, intelligence from industrial espionage, was already a cynical farce. From now on, where detailed suspicions existed – thus, a commission of investigation of the European Parliament, including Alain Krivine, was already setting out its problems in 2001 – we have evidence.

In other words, in “our democracies,” all the telecommunications of the population are being collected, analyzed, under permanent surveillance. It is about a jump in the quality of controls on populations and about aggressive, anti-democratic behavior. The extent of this surveillance, the absence of control, makes it impossible to imagine all the consequences.

In actions, the United States is behaving in a more aggressive way, a way more dangerous for democratic rights, than the Soviet regime, which Western propaganda wanted to present as the worst of the totalitarianisms – simply because the US has the means. The NSA surpasses the Stasi (East Germany’s state police) by far, in using its abilities at wiretapping on a more widespread scale.

There remains the matter of the autonomy of the allies of the US, that are nevertheless directly under surveillance. It is necessary to know that, from fear that Snowden was on the plane of Evo Morales, then in Moscow for a meeting of natural gas producing countries, France, Italy, Portugal, Spain, and other European countries prohibited the Bolivian presidential airplane from flying over their airspace, in order to return to Bolivia. Spain also wanted to search the plane. This gives an idea of the subordination of the European governments to the United States. This scandal is exploding in the middle of the negotiation of a gigantic free trade agreement between the European Union and the United States. Manuel Valls is taking a position and declaring himself against the official request for asylum in France made by Snowden, with the following reasoning: “The United States is a democratic country, with an independent judiciary.” Widespread wiretapping of the world’s population, the complete breakup of the very concept of a private life, total surveillance, all this in the biggest secrecy, are conspicuously compatible with Valls’ version of “democracy.”

It is true that the French communications media are beginning to write articles on “PRISM in the French manner” and the wire-tapping services of the DGSE (Direction Générale de la Sécurité Extérieure). Between 2009 and 2013, the DGSE hired 687 personnel, mostly engineers. All the electromagnetic signals sent out by computers or telephones in France would be stored, and now, these data are accessible, without regulation, for the different intelligence services: Military intelligence, DCRI (Direction Centrale du Renseignement Intérieur), Tracfin (intelligence service of the Parisian police). Is it legal? No, since no law regulates their existence, covered by military secrecy.

Now it is obvious that the world crisis is accelerating the process of popular awareness; the brutality of US imperialism, but also that of its allies, is concealed behind the good-natured face of an Obama visiting Mandela’s prison or of a François Hollande, of modest habits. The popularity of the Guy Fawkes mask, the face of Anonymous, in the Egyptian, Brazilian, Turkish demonstrations, reminds one of the fact that young people can become politicized by access doors leading to the inevitable question of imperialism.

Translated from the French by Pablo Inzabar