Eiffel Tower Shut Down as 1.3 Million People Mobilize Across France

Workers across France came out to protest the pension reform in numbers not seen since Dec. 17. As French President Emmanuel Macron officially announced the reform bill to the Council of Ministers, workers coordinated actions across the country, including shutting down the Eiffel Tower and cutting power to wide sections of France’s cities. 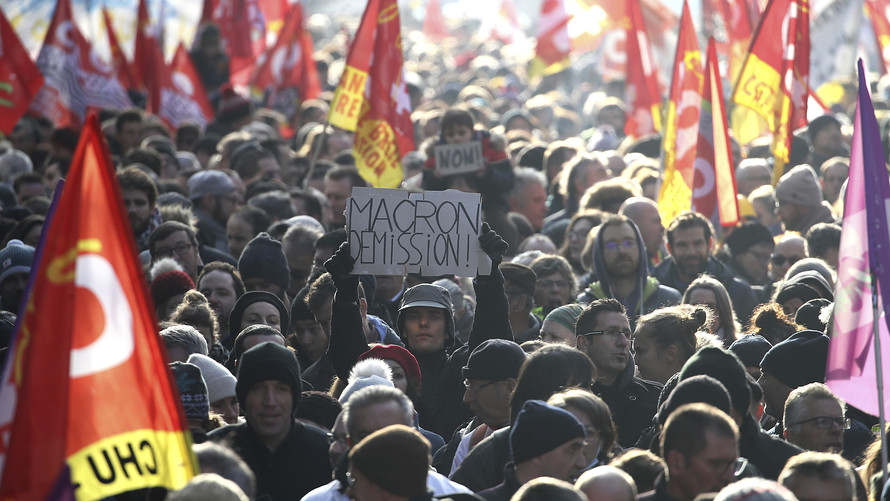 On Friday, amid massive demonstrations of workers and activists in Paris, the Eiffel Tower’s Twitter account announced: “Due to a national strike, I’m closed today.” The closing of the iconic monument in the heart of France’s largest city symbolizes the wider effect of the country’s longest strike since 1968. Eiffel Tower workers joined over a million people across France in a strike and mass mobilization against President Emmanuel Macron’s plans to overhaul the pension system. In Paris alone, 350,000 people took part in a massive march along the Seine. More than a million people across the country participated in Friday’s mobilizations, according to one of France’s largest unions, the CGT. Friday marked the 51st day of France’s historic national strike, confirming that the movement is far from dead despite government reports and a media blackout.

Workers in the RATP-SNCF demonstrate in Paris, chanting, “We are not tired!” They are determined to strike until the pension reform is withdrawn.

Striking train and metro workers from the SNCF and RATP paralyzed transport in areas in and surrounding Paris on Friday, ramping up similar actions from previous days and reenergizing the strike in this sector. Meanwhile, other workers—such as sanitation workers and state employees—entered the struggle, joining work stoppages and demonstrations. While it remains to be seen whether this level of participation will continue and spark new coordinated actions to push the strike forward, this Friday’s demonstration was enough to concern the Macron government as it officially presented the details of the controversial reform bill that sparked a powerful anti-government movement—the police were out in full force to repress the protests.

This demonstration of workers’ power is still going strong, having started nearly two months ago and defied Macron’s attempt at a “Christmas truce.” Friday’s mobilizations were preceded by a three-day walkout at the Rouen shipyards, as well as a work stoppage at France’s largest electricity plant. Electrical workers cut power in over 50,000 businesses and residences across Paris on Thursday night as demonstrators participated in a torchlight parade. Similar actions were carried out in other cities.

Macron and his ministers, with the support of union leaders, are maneuvering to give the appearance that they are willing to “dialogue” and make concessions. But at the same time they are sending the police to brutally repress the demonstrations and insisting on pushing the reform through. Nevertheless, the strikers are still standing and still have the support of the majority of the population. The latest polls show that over 60% of the population believes that the government should withdraw the reform completely.

Meanwhile, the masses are losing faith in the government and its institutions. Macron continues to fall in popularity, and he is closely followed by Minister of Education Jean-Michel Blanquer. Up until recently, Blanquer was one of the most popular figures in the government, but his schemes to cut education funding and attack teachers’ positions and wages have shown teachers his true colors. In fact, teachers were among the central actors in the Paris demonstration, arriving in huge numbers to a demonstration at the Place de la Concorde. Education workers at every level, from elementary and high school to the university level, shut down schools across the country for another day of national protest.

In a new turn in the movement, a large contingent of students marched in solidarity with their teachers and in defiance of a pension reform that would throw their futures further into precarity. Another new element in the mobilization on Friday was the participation of precarious higher-education workers.

Artistic and cultural institutions also played a significant role in Friday’s mobilizations. Workers in France’s libraries, museums and monuments, as well as members of the Opera and the Comédie Française, were all on strike. Civil servants and public sector workers in Paris also participated, in particular workers in the Ministry of Labor, as well as energy workers and the airport workers of Paris and Air France. Sanitation workers also joined the demonstrations, alongside many other sectors of workers. Many workers united under the slogan: “Louis XVI’s guillotine could be back in service by 2020”—a clear warning to Macron of the tenuousness of his position in the country.

The rank and file members of France’s unions came out in full force for the national day of action, organized in larger contingents than on the last day of mobilizations on Jan. 16, which mobilized 800,000 people. On Friday, the CGT reported 1.3 million people taking part in demonstrations across the country. Local union branches in particular brought more people out into the streets to participate in the strike, showing more organization and determination than previous mobilizations.

These actions are planned to continue until Jan. 29, the next national day of protest and mobilization. This week will test the persistence of the extraordinary radicalism being expressed by workers in Paris and other cities across the country. While the media continues to report dwindling participation in the strike, Friday’s action proved that the government is far from winning the fight. To seize on this momentum, striking workers must organize beyond national days of action to coordinated and sustained strike actions across industries in order to prevent Macron’s government from pushing through the pension reform.