On Wednesday, thousands took to the streets of El Salvador to protest President Nayib Bukele and his new Bitcoin law. 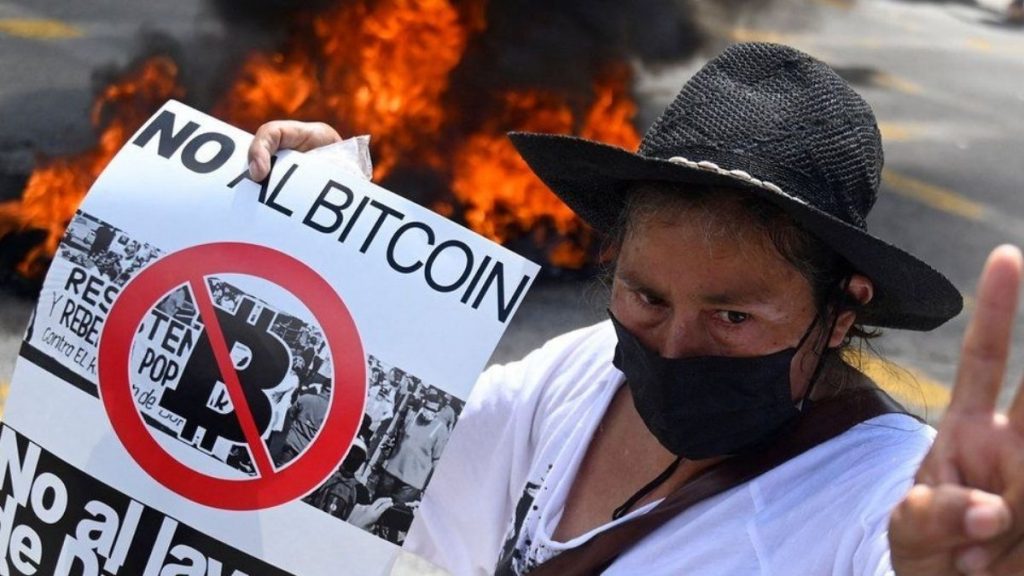 Workers, students, union and peasant organizations, feminist groups, human rights activists, and even judges took to the streets on Wednesday in El Salvador. It was the country’s largest mobilization in decades.

Among the issues being protested were the Salvadoran president Nayib Bukele’s decision to double the number of military troops under the pretext of fighting violence and crime. In reality, it’s about gaining support and surrounding himself with the armed forces.

In addition, Bukele’s Bitcoin law has been widely rejected by people all over the country. The law makes Bitcoin legal tender across the country. While the President claims this measure will make it easier for people in El Salvador to send money abroad, many believe it will bring inflation and even greater instability. At the protests, people set fire to Bitcoin machines amidst the mass marches.

The government has proposed more than 200 changes to the constitution, leading to this outcry against authoritarianism. One of the changes being protested is a constitutional reform that would concentrate more power in the hands of the president. Specifically, it allows the president to seek reelection despite a constitutional limit on running consecutively. Another “judicial reform” would promote judges aligned with the ruling party and dismiss all dissidents.

Further, Bukele fired a judge in charge of investigating the genocide of El Mozote in the 1980s. As ProPublica highlighted, “Judge Jorge Guzmán has spent the last six years painstakingly gathering evidence from the survivors of one of the worst massacres in the modern history of Latin America: the slaughter of a thousand old men, women and children by the Salvadoran army during the country’s civil war.” Just two weeks ago, the legislature, controlled by Bukele, fired every judge in the country older than 60. Guzmán is 61.

This one among many authoritarian measures taken by Bukele, who has consistently fired judges who don’t agree with him.

The demonstrators’ banners carried messages like “No to presidential reelection, no to Bitcoin, no to militarization, no to dictatorship!” and “Without judicial independence there are no guarantees for the defense of human rights.”

Bukele counts on the military’s support, thus demonstrating the bonapartization of the political regime that he is increasingly designing in his own likeness. For this reason, most of the demonstrators maintained that, in the face of an authoritarian regime such as the Salvadoran one, the only option for the population is to go out and protest to defend their rights and their freedoms.

This new day of mobilization highlights the authoritarian character and anti-democratic measures that Bukele represents, but also the conditions that plague the vast majority of the population, such as low wages, the health system’s failure to cope with the pandemic, as well as the increase in femicides, disappearances of young people, and repressive measures in collusion with gangs.

September 15 showed that there is a mass movement willing to confront Bukele’s government. But the opposition parties, which also took to the streets, are not the solution. They have been part of corrupt political regimes aligned with capital that are far from the interests of the people. It is fundamental that the struggles undertaken by the workers, peasants, and the great masses against Bukele follow a course independent of the bosses’ parties as a whole.

Originally published in Spanish on September 15 in La Izquierda Diario