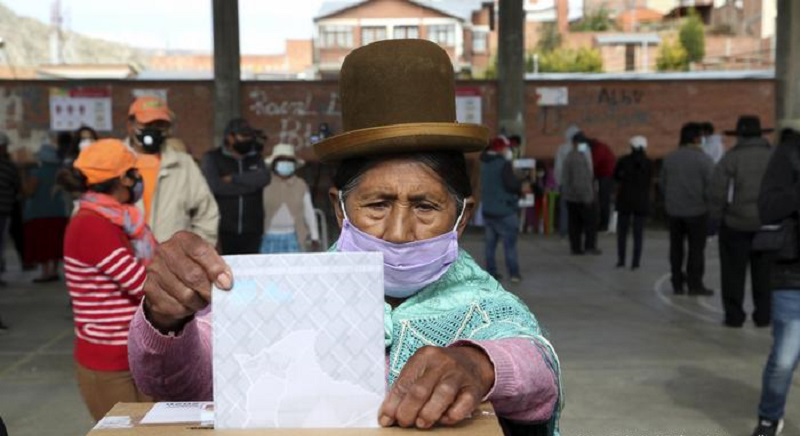 At midnight on election day in Bolivia, after several hours of uncertainty, the initial results were announced. Although these results are not yet official, they confirmed what the vast majority of the population had already expected: Luis Arce Catacora of the Movement for Socialism (MAS) appears to have won in the first round with 52.4 percent, followed by Carlos Mesa with 31.5 percent, and the far-right candidate Luis Fernando Camacho with 14.1 percent.

In a tweet published after midnight, the de facto president, Jeanine Áñez, congratulated Arce, acknowledging the MAS victory. She wrote: “with the data we have available, Mr. Arce and Mr. Choquehuanca have won the election.”

With these numbers, the MAS won a higher percentage than in the elections of October 2019 (which preceded the coup). If these results are confirmed on Tuesday, the MAS will maintain a two-thirds majority in parliament. The electoral setback suffered by the pro-coup forces is the result of the Áñez government’s disastrous and corrupt response to the Covid pandemic. Arce’s victory is, moreover, a serious reversal for the right-wing offensive in the region led by Trump and Bolsonaro. The right-wing bloc in Bolivia, divided by internal disputes, was unable to use its control of the state apparatus to reverse the relationship of forces with the MAS.

A Tense Calm on Election Day

“This was a calm election day,” all the bourgeois media in Bolivia agreed. The day was marked by rumors and accusations of fraud, and there was a perceptible tension in the air, but this did not express itself in the form of violent conflicts. Polls were opened by the president of the electoral commission, Salvador Romero, at 8 a.m., and the polls closed at 5 p.m. Romero offered a first report at 9 p.m., confirming that the counting was taking place without disruption in what he called “the most complex election in the history of Bolivia,” assuring the public that the results would be an “expression of the people’s will.”

On Saturday, Romero had unexpectedly announced the suspension of the Diffusion of Preliminary Results (DIREPRE) as a way to “prioritize the official results.” This was criticized by most political parties, but in the end, they accepted the decision.

Let us recall that in the elections of October 2019, it was precisely the unexpected halt of this rapid count that created suspicions of electoral fraud, creating the biggest political crisis Bolivia had experienced in years and becoming the central justification for the right-wing coup against Morales and the MAS in November.

With the rapid results in 2019, Carlos Mesa announced his victory without waiting for official results. It is striking today that this rapid-count system, which last year the Right considered fundamental, is no longer being defended as a relevant part of the electoral process. This contradiction increased the tension a few hours before the voting began on Sunday.

Although the election day passed without any violence, nothing is certain until the final count is announced, which could be presented on Monday or perhaps as late as Wednesday.

The only official numbers confirmed on Sunday night were from voters from other countries in which Bolivian citizens can vote (a total of 30 countries, with the majority in Argentina and Spain). These votes went to the MAS with 78.4 percent, followed by Mesa with 14.6 percent.

Threats, Repression, and Accusations of Fraud

The supposed “festival of democracy” is taking place amid sharp repression. Since the coup, there has been a wave of militarization with serious consequences around the country. Starting on Saturday, the country has been flooded with the olive green uniforms of police and soldiers in all of Bolivia’s departments.

As was to be expected, countless troops were concentrated in El Alto, the center of La Paz, and the south of Cochabamba — all centers of resistance against the coup last year. Millions of dollars had been invested in the repressive forces, which was announced with great fanfare by the most active minister in the coup government, Arturo Murillo. He claimed that these additional weapons would serve to “make sure democracy is respected.” Hours before the polls opened, he warned against supposed “subversive groups.” Such language takes us back to the times of Bolivia’s military dictatorships.

The parties accused each other of attempted fraud, a warning of possible greater tension and conflict, but this has not manifested itself so far. The MAS has raised the most alarms about fraud, since the pro-coup forces control the state apparatus. Nonetheless, its main representatives said they would respect the electoral results, no matter the outcome.

The latest polls had reduced the gap between Mesa and Arce. A few right-wing candidates dropped out just before the vote, with the pro-coup forces calling for a “tactical vote” to prevent Arce from winning the first round. That would then lead to a second round in which the anti-MAS vote could be united.

You might also be interested in: Violeta Tamayo: “Against the Coup in Bolivia, the Working Class Will Find a Way Out of the Crisis”

The final polls showed that an enormous number of people were undecided, around 20 percent, with supporters of candidates who dropped out unsure about whether to switch to Mesa or Camacho. Camacho, the figurehead of the most determined and reactionary sectors of the Right, maintained his candidacy despite criticism from the “moderate” Right that lined up behind Mesa. The pro-coup forces were deeply divided in the election, as they had been previously.

Amid these electoral tensions, the working class and the indigenous peasant movements have been and remain in a difficult situation. The political crisis that opened one year ago, along with the social, health, and economic crises, are constantly hammering the poorest people in Bolivia. The criminal actions of Áñez and her cabinet led sectors of the masses — who had already mobilized against the coup in 2019 — to revive their hopes that the MAS could drive out the coup government. This government was responsible for the massacres in Senkata, Sacaba, and Ovejuyo, as well as much-publicized cases of corruption and an incompetent response to the pandemic.

As the Revolutionary Workers League–Fourth International (LORCI, the publishers of La Izquierda Diario Bolivia, the sister site of Left Voice), we have been fighting alongside these sectors of the masses against all the attacks of the coup government. We have been part of all the struggles to make sure this election took place, as well as to force Áñez to resign. We have seen, together with workers from the countryside and the cities, how the MAS has used all these mobilizations as a mere bargaining chip for its electoral plans, without calling for strengthened mobilizations. On the contrary, the MAS has effectively assisted the coup government by demobilizing the mass movement that emerged in November 2019.

We understand the despair that many feel, caused by the barbarism of the coup government, which has in turn led to renewed hopes in the MAS. And while we have been part of every mass struggle, we have unceasingly denounced the MAS’s constant capitulations, not only during the recent political crisis but also in its agreements with different sectors of the Right during its 14 years in government. Owing to this party’s class conciliation and constant subordination to the interests of the bourgeoisie, as was shown then and now, as the LORCI we have never politically supported the MAS.

The undemocratic character of the electoral system — and the MAS has created additional hurdles — has prevented an independent workers’ alternative from emerging. This is why we cast a blank ballot. Yet our position is not and never was neutral: we are on the side of the sectors mobilized on the streets, with whom we stand in the struggle against this coup. We are today and will remain together with the masses, against any threat of fraud and in defense of the legitimate right to defend their vote — without implying any political support for the MAS.

It is urgently necessary to build a political alternative that fights for class independence, without negotiating away basic rights in discussions with the Right. We need an alternative that unites the struggles of indigenous peoples, the poor masses, women, LGBTQ+ people, and the working class so that the cost of the crisis is no longer paid by the working class. The rich and the capitalists must pay!