The Workers League for Socialism (LTS) in Venezuela calls on working people to abstain in the parliamentary elections this Sunday in Venezuela, and also in the “referendum” organized by Juan Guaidó. The Revolutionary People’s Alternative (APR), which recently broke with the Maduro government is, unfortunately, no alternative. We publish a summary of the LTS statement. 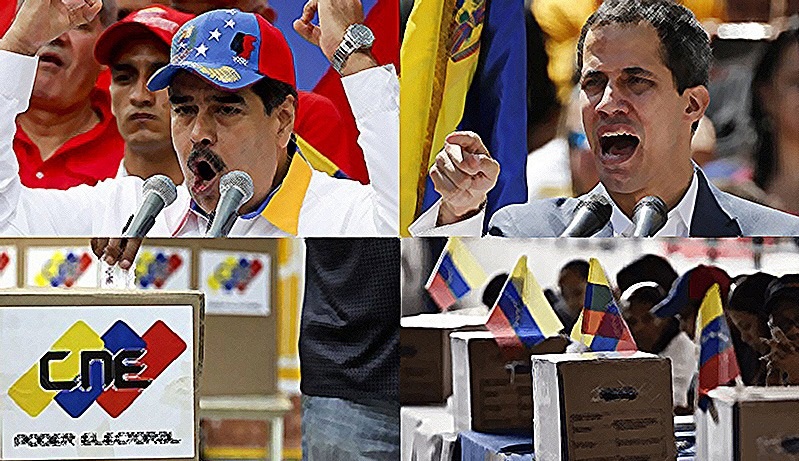 This Sunday, elections will take place in Venezuela for the National Assembly. Venezuelans will go to the polls in the midst of the worst economic crisis in the nation’s history. All essential services are collapsing — health care, education, food supply, water, electricity, fuel, and so on. Hyperinflation is pulverizing the incomes of the entire working population. The minimum wage is around US$1 per month.

The Trump administration and right-wing media endlessly repeat that the crisis in Venezuela is a result of “socialism.” But the opposite is the case: the government of Nicolás Maduro, who came to power after the death of Hugo Chávez in 2013, has led the country into a catastrophe because it refuses to break with national and international capital.

While some on the international Left held up Chávez and then Maduro as a model, Trotskyists have always fought for an independent, working-class perspective. On Wednesday, the Workers League for Socialism (LTS) published an extensive declaration on our sister site, La Izquierda Diario Venezuela, titled “Working people have nothing to gain from the elections of December 6, nor from Guaidó’s ‘referendum.'” This article summarizes that declaration.

Two Wings of the Bourgeoisie

The Maduro government, of a Bonapartist character, has taken an increasingly authoritarian and neoliberal turn. Recent laws have eliminated what remained of workers’ rights while criminalizing all forms of protest. Police forces, secret services, and paramilitary groups harass and repress workers, while the government has imprisoned dozens of workers for the “crime” of fighting for their rights — all to enforce a neoliberal capitalist model. The Maduro government’s recent “anti-blockade law” opens up the country to plunder by multinational corporations.

The opposition to Maduro has long called for intervention by the United States and other imperialist powers. It likes to calls itself “democratic,” but has come out in support of right-wing coups such as the one in Bolivia last year. Its goal is to remove the Maduro government with imperialist intervention or a coup by the armed forces. Juan Guaidó even proclaimed himself the “legitimate president of Venezuela” and was recognized by the Trump administration and numerous European powers, as well as right-wing governments in Latin America. His attempts at a coup have failed because he was unable to convince the armed forces to break with Maduro.

The so-called Democratic Unity Roundtable that brings together the opposition parties is boycotting the elections. Parallel to the the vote, Guaidó is holding his own “referendum” from December 7 to 12 to mobilize opposition supporters. The three questions on this referendum aim at rejecting the legitimacy of the Maduro government and call on the “international community” (i.e., imperialist powers) to isolate it, continuing sanctions and economic strangulation to open the way for a new government led by the opposition.

A number of parties have formed the Revolutionary People’s Alternative (APR), which is also running candidates in this election. The APR includes the Communist Party of Venezuela (PCV, a Stalinist party) and the Fatherland for All party (PPT, which is social democratic). Both were long part of a coalition with Maduro’s United Socialist Party of Venezuela (PSUV). This new coalition is also supported by the “trotsko-chavista” group Class Struggle (LdC) which until recently was part of the PSUV.

The LTS writes that while this slate has won the support of a number of honest workers and activists, it does not represent a genuine working-class alternative independent of all wings of the bourgeoisie. Instead, the APR bases itself on the legacy of Hugo Chávez, who never attempted to overthrow capitalism, but instead sought to build an alliance with “patriotic businessmen” to achieve “national development” based on “social justice.” This was a form of Bonapartism sui generis and class collaboration.1

The parties that formed the APR long supported the Chávez and Maduro governments — as recently as last year, they were supporting the increasingly Bonapartist turn of the government by backing the farce of the “National Constituent Assembly,” which went on to pass reactionary and neoliberal laws. They have now broken with Maduro, but have offered no self-criticism of their trajectories. In contrast to what the APR says, Maduro does not represent a “betrayal” of Chavismo. Rather, Maduro is attempting to apply Chavez’s problematic legacy in a very different situation. Rather than building up a working-class alternative to the government and the opposition, Óscar Figuera of the PCV and the APR calls on the government to “correct” its policies.2

The LTS rejects all the government’s attacks against the APR, which range from censorship in government-controlled media to physical attacks by police and paramilitary forces. While the LTS is willing to join with others in all forms of struggle, it cannot give political support to a project based on class collaboration. The great tragedy of the Venezuelan workers’ movement for the last 20 years has been its dissolution into Chávez’s political project — this includes different groups that now form the APR. At the same time, sectors of the workers’ movement that remained independent of chavismo often made deals with the right-wing opposition. But the terrible and endless crisis working people in Venezuela are experiencing can be resolved only by the working class itself. That is why the LTS has a consistent record of fighting for the workers’ movement to constitute itself as an independent political force.

For a Free and Sovereign Constituent Assembly

In 2017, the Maduro government convoked a fraudulent “Constituent Assembly,” which assumed plenipotentiary and superconstitutional powers in order to replace the National Assembly that had fallen into the hands of the right-wing opposition in 2015 . This assembly was nothing but an instrument of the Bonapartist cliques in charge of the country. Maduro recently announced that the assembly would cease its activities after the elections, despite the fact that the supposed delegates had not even been informed, much less made that decision. This fraud has been used to justify a permanent state of exception, ban political parties, prevent union elections, restrict workers’ mobilization, and throw workers into prison.

The workers’ movement cannot hope to resolve the crisis by supporting either the Maduro government or the pro-imperialist opposition. It needs to recover its capacity to struggle, in order to fight for an emergency program of the working class and the poor masses. What is needed is a Free and Sovereign Constituent Assembly, based on people’s mobilizations and bodies of self-determination, with the perspective of a workers’ government. Such an assembly would be able to nationalize all natural resources and strategic businesses under workers’ control, with a monopoly of foreign trade. The crisis in Venezuela has been created by the capitalist policies of a Bonapartist government. The only way to resolve it is with socialist policies of the working class.