Elizabeth Warren Says She Wants to Make College Debt-Free, But Can She Deliver? 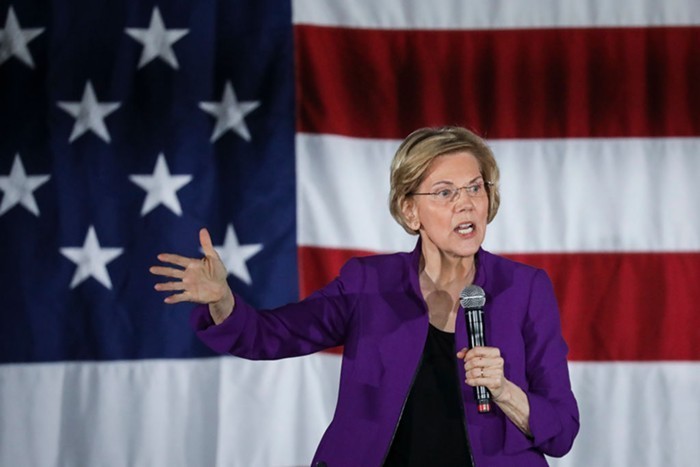 On Monday, U.S. senator and presidential candidate Elizabeth Warren announced a surprisingly bold plan to make public higher education free and reduce student loan debt. The proposal, as Warren explained, would use state and federal funds to make all public universities and colleges tuition free, and it would increase Pell Grant funding by $100 billion over 10 years in order to cover other expenses such as room and board, transportation and books. Additionally, she announced a one-time student loan forgiveness plan that would eliminate up to $50,000 of individual student debt for households earning less than $100,000 per year and progressively less for those earning up to $250,000. Both initiatives, Warren claims, would be paid for by an unprecedented 2% wealth tax on the “ultra-rich” or those with a net worth of more than $1 billion.

Warren’s announcement has been met with both anger and enthusiasm by major media outlets, many of which have falsely painted her proposals as a way of ending student loan debt. Critics on the right have denounced the proposal, absurdly claiming that it is unfair to those who have already paid off their loans or who have not or do not plan to attend college. Meanwhile, progressive left publications such as Jacobin have called on their preferred presidential candidate, Bernie Sanders, to step up his game and do one better than Warren by putting forward an even more universal program of loan forgiveness, which would conceivably include households earning more than a quarter million per year.

In a presidential campaign in which even centrist Democrats have come out in favor of what were once radical demands, such as Medicare for All and a Green New Deal, it is no surprise that liberal progressives like Sanders and Warren are pushing for ever more ambitious reforms. It is important, however, to remember where these ideas are coming from and why they are resonating with so many people. Warren and Sanders are riding the wave of discontent and anger that has characterized American politics since the great recession, but they are not leading on the question of debt relief and free tuition so much as they are tailing the masses of students and activists who have been promoting and fighting for these demands for years.

While these proposals are certainly a welcome development, and while student loan forgiveness and free public higher education are important and worthwhile reforms that should be supported by all working people everywhere, winning such demands requires more than voting for this or that progressive candidate. Indeed, electoralism of that sort is a recipe for precisely the kinds of compromises that brought us such weak, Band-Aid reforms as the Affordable Care Act and the Clean Power Plan. If we want to really make education free for all and finally put an end to student loan debt, we will need a bigger, more militant and more organized mass movement of students, teachers and rank and file educators who are ready to take the fight directly to their campuses and state legislatures.

Burdened by rapidly rising rents, declining wages and limited job opportunities, young people in the United States have been flocking to universities and colleges for years to earn the credentials they believe will provide them with a better future. At the same time, state and federal funding for higher education has been slashed, leading to an unprecedented and extraordinary rise in tuition. In fact, tuition has increased almost eight times faster than wages since 1980.

As a consequence, students and their families have borrowed trillions of dollars just for the privilege of an education, with more than $1.5 trillion still unpaid and collecting interest. That’s more than the combined credit card debt of the entire country. Many of these borrowers may have never managed to complete their degrees, while even some of those who did are finding themselves in jobs that don’t pay them enough to service their debts. Studies suggest that default rates over 20 years can be as high as 40% for some cohorts. Such a system is not only unsustainable but also shameful, and there is no reason why working-class students should be burdened with such debt for the rest of their lives or why public higher education should not be entirely tuition free.

But tuition is only part of the problem, especially for students of color and those who come from poor or working-class families. For many of these students, who sometimes work 30 or 40 hours a week while attending school, the biggest problem is time. Unable to survive without working full time and unable to save enough to cover even basic emergencies, working-class students are forced to prioritize their paid work over their coursework. Such limited time is especially difficult for students of color, many of whom grew up in poorly funded and informally segregated public school systems. As a result, the dropout rate for public college and university students is astronomical, especially community college students, who make up almost half of the U.S. student population. Few students manage to graduate in six years and even fewer in four, while almost half of those who attempt college never graduate at all.

These dropout rates are only exacerbated by the fact that, thanks to decades of budget cuts, many public colleges and universities now rely upon massive armies of overworked and unsupported adjunct faculty who teach most undergraduates and who are regularly paid near poverty wages. It’s hard to do well, after all, when your professors also have to work several jobs just to get by. Thus even students who receive tuition assistance are still often forced to take out significant loans in order to complete their studies. In fact, 66% of graduates from public colleges and universities have loan debt with an average $25,500.

While higher education administrators across the country have tried to address these retention rates through a series of curricular reforms, the fact is, getting a degree is incredibly difficult for all but the most well-off for reasons that should be obvious to anyone who has ever had to work to survive. Increasing the level of Pell Grant funding, as Warren has proposed, is a good idea and could help cover many of these costs, but states also have to commit to massively increasing the funding of their university systems.

While Warren’s one-time debt reduction program could potentially eliminate as much as 75% of the debt that already exists, including the debt of those who did not graduate, it will not eliminate all student loan debt, nor will it in any way end the accumulation of future debt, especially at private nonprofit colleges and universities, where tuition can top $50,000 a year. Even with generous financial aid packages, the average loan debt for private nonprofit colleges is still a whopping $32,300, often borrowed at interest rates above 4%.

Rapidly rising tuition and student loan debt are crises that must be addressed, and funding reforms through redistributive policies, such as a nationwide wealth tax on corporations or the very rich, is the only just way to do it. But it would be unwise for working people to expect politicians like Warren, who have sworn fealty to the capitalist system, to deliver on their promises. To win real change requires organization, militancy and class independence. But the struggle is bigger even than these demands. Public education, whether it’s elementary school or college, has been critically underfunded for decades, and the first step to a fair, high-quality education system will require at minimum a full restoration and increase in both federal and state funding per student, a demand that can only be won by the steady mass mobilization of teachers and students in concert with unions and working people.

Such organization is, however, not only the key to winning demands but also the nucleus from which working people can wrest greater democratic control over public services like education. And there are models of such struggle everywhere. From the 2012 Quebec student protests that shut down campuses across the entire province, to the Student Non-Violent Coordinating Committee (SNCC), which formed a national organization to address wide-ranging problems in American society above and beyond education reform, the lesson is that the real power of the people is in the streets.

Following these models, and building models of their own, students must organize both on and across their campuses, must demand the formation of student unions and greater representation and control of public university policy and decision making, and must refuse to settle for anything less than a fully funded free and open public education system from pre-K to graduate school. Meanwhile, faculty and staff, if they wish to improve their working conditions and the quality of education they can provide their students, must work to build fighting rank and file education unions that look beyond their members’ immediate interests and are unafraid to use the strike weapon. Faculty and staff can radically change the field of struggle upon which they and their students fight by reaching out to their communities and drawing them into these battles.

Over the next year students and young people will face an enormous amount of pressure to get with the program, to get out the vote and to throw themselves into the campaigns of this or that Democratic politician. But doing so would be a huge mistake, since without broad, class-based, independent organizations, the fate of working people will simply remain tied to the whims of politicians and the ruling class, who rarely deliver what they promise.