Elvira Arellano is arrested and deported 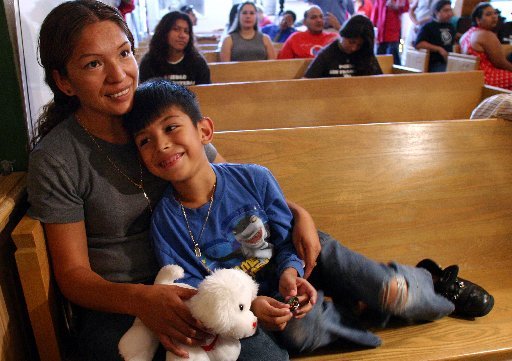 On Sunday, August 19, Elvira Arellano was arrested in front of a
church in Los Angeles, while she was with her 8 year old son, together
with other activists, campaigning for legalization of millions of immigrants. Elvira has become a symbol of the immigrants’ movement that exploded in April, 2006, when hundreds of thousands of immigrants marched against the reactionary laws that seek to criminalize 12 million people who live and work in the US.

Elvira, a Mexican immigrant, is the most visible face of a daily
reality of millions of women (representing about half of Mexican immigrants) that risk their lives in crossing the border, fleeing from the poverty and unemployment of their native countries.

Elvira was arrested and deported the same day, forced to leave her
son, a US citizen, after having spent a year in a church in Chicago,
where she resisted her deportation order. The arrest and deportation
of Elvira is a sign of the harsh reality illegal immigrants are living
in, immigrants who are in their overwhelming majority working women
and men, victims of violent raids carried out by the ICE (a special
force for arresting immigrants) in workplaces and Latino
neighborhoods. On Saturday, August 25, a mobilization took place in
Los Angeles, called by different Latino organizations, workers’ and
religious groups, many of which are calling for a new boycott and
march on September 12.