Jonathan Israel is one of the most important scholars of the radical legacy of the Enlightenment. But a look at Israel’s scholarship shows that his Radical Enlightenment is not radical enough. 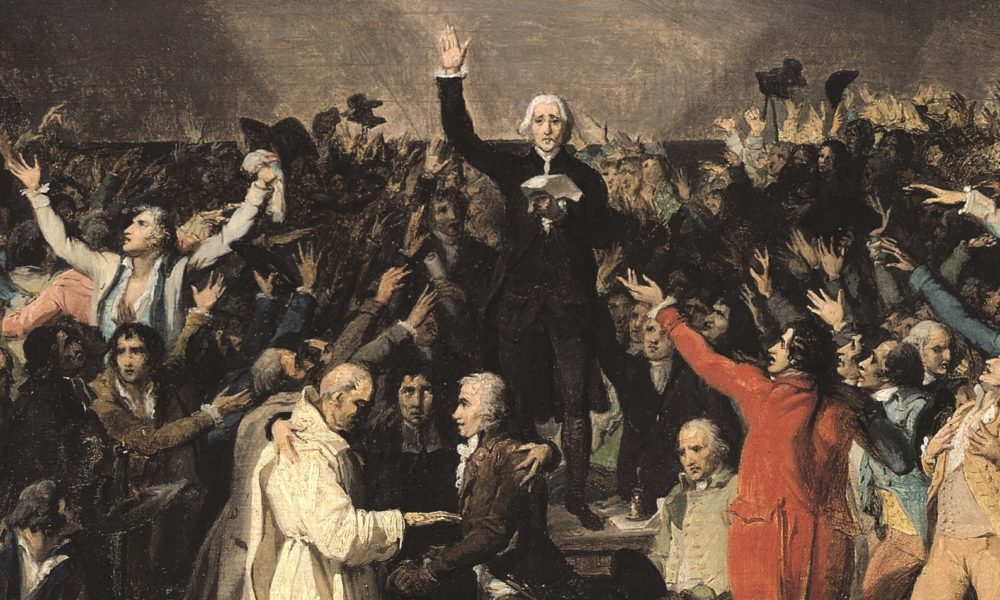 The Enlightenment legacy is a key topic of debate among socialists today, and it still inspires heated controversy. Not everyone on the Left believes that the Enlightenment is a useful framework. Indeed, some think the Enlightenment is utterly retrograde, bound up with the reactionary capitalist ideologies that have helped sustain class domination, racism, and European colonialism. Citing these negative connotations, some left-wing critics cast aside the Enlightenment as irremediably bourgeois.1

One of the most important contemporary historians of the Enlightenment and its political heritage is Jonathan Israel, a British-born historian who has taught at the University College London and Princeton University. He is the author of a wide-ranging series of studies on the Enlightenment project. Israel makes a clear case in his books for why the Enlightenment matters today, and rejects fashionable skepticism toward modernity:

Does it really matter how we interpret the Enlightenment? Surely, it does. For while it has been fashionable in recent years, above all (but not only) in the Postmodernist camp, to disdain the Enlightenment as biased, facile, self-deluded, over-optimistic, Eurocentric, imperialistic, and ultimately destructive, there are sound, even rather urgent, reasons for rejecting such notions as profoundly misconceived and insisting, on the contrary, that the Enlightenment has been and remains by far the most positive factor shaping contemporary reality and those strands of “modernity” anyone wishing to live in accord with reason would want to support and contribute to.4

Israel’s contribution to Enlightenment history is groundbreaking, and not just in terms of the encyclopedic range of his books; more crucial is his theoretical-historical distinction between the Moderate Enlightenment and the Radical Enlightenment. The moderate camp attempted to reconcile reason with religious orthodoxy, thereby accommodating monarchy, racism, and established hierarchies. Examples of the Moderate Enlightenment include such thinkers as Locke and Voltaire, who considered reason the exclusive privilege of the upper classes. They did not believe ordinary people should be enlightened, since an educated mass would overthrow the traditional social order.

On the other hand, the Radical Enlightenment was an uncompromising affirmation of reason; it did not seek to accommodate thrones or altars. In contrast to the moderate camp, it upheld secularism, democracy, materialism, egalitarianism, as well as racial and gender equality. The pioneer of Radical Enlightenment for Israel was the 17th-century excommunicated Dutch-Jewish philosopher Baruch Spinoza. Spinoza represented a universal philosophical revolution that stemmed from his monistic system. This system abolished the notion that God is a personal creator and demonstrated that God and nature were one and the same thing. By thoroughly excluding the supernatural, this secular metaphysics became the basis for a new thinking about democratic freedom and social equality. For Spinoza, all human beings can use reason to understand and shape their world.

While the Moderate Enlightenment attempted to make reason safe for the ancien régime, according to Israel, the Radical Enlightenment was an essential ingredient of the 18th century’s revolutions. As with Marxism in the Russian Revolution, one cannot comprehend the American, French, and Haitian revolutions without the backdrop of Enlightenment thinking. As Israel says, “All Enlightenment by definition is closely linked to revolution.”5 The American Declaration of Independence, the French Declaration of the Rights of Man and Citizen, and the Haitian abolition of slavery were all motivated by Radical Enlightenment ideas. The Enlightenment was far from being reducible to European concerns; in justifying the Haitian Revolution, leader Toussaint Louverture invoked the ideals of the French Revolution: Liberté, égalité, fraternité.6 This showed that Enlightenment thinking could underpin the universal emancipation of all people.

Edmund Burke, the arch-conservative opponent of the French Revolution, understood how contagious Enlightenment ideas were for the oppressed; that these ideas were political dynamite, not just in terms of storming Bastilles, but also in igniting anti-slavery and anti-colonial revolts. Burke, in addressing the French revolutionaries, points to the dangerous consequences of their ideas for the colonies:

In what chapter of your code of the rights of men are they able to read that it is a part of the rights of men to have their commerce monopolized and restrained for the benefit of others? As the colonists rise on you, the negroes rise on them. Troops again, — massacre, torture, hanging! These are your rights of men! These are the fruits of metaphysic declarations wantonly made and shamefully retracted!7

Israel is not alone in recognizing the Enlightenment as the ideological basis of these revolutions. There is a tradition in Hegel and Marxism that grasps how these ideas became a material force in society; that as Engels put it, the French Revolution was a time when “the world stood upon its head; first in the sense that the human head, and the principles arrived at by its thought, claimed to be the basis of all human action and association; but by and by, also, in the wider sense that the reality which was in contradiction to these principles had, in fact, to be turned upside down.”9 Enlightenment philosophy in these bourgeois revolutions, at least for a time, proved insurrectionary.

For Marx and Engels, Enlightenment ideals could not be fully realized in bourgeois society. While they were sarcastic about bourgeois slogans like Liberté, égalité, fraternité, they were sarcastic about them from the Left; they did not want to repudiate freedom, equality, or solidarity, but argued that the advancement of capitalism made a mockery of these promises.10

According to The Communist Manifesto, the working class would seize not only the productive forces of capitalism but also Enlightenment science: “The weapons with which the bourgeoisie felled feudalism to the ground are now turned against the bourgeoisie itself.”18 As Tariq Ali put it, The Communist Manifesto is the “last great document of the European Enlightenment,” casting the proletariat as the heir to all that was progressive in Enlightenment philosophy.19

More than 150 years before Israel’s Radical Enlightenment, Marx and Engels anticipated his thesis that Radical Enlightenment ideas were connected to revolutionary politics. At various times in their writings, they emphasized the philosophical wellsprings of radicalism in the 18th-century materialist tradition. But they go much further than Israel in establishing the connection between the Radical Enlightenment and socialism. Engels claims in Anti-Dühring that:

However much modern socialism originated in substance with the contemplation of the class contradictions found in existing society, between those owning property and the propertyless, workers and exploiters, in its theoretical form it appears in the first instance as a more consistent continuation and development of the principles propounded by the great French spokesmen of the 18th century Enlightenment. Its first representatives, Morelly and Mably, belonged to this group.11

Georgi Plekhanov, the father of Russian Marxism, also anticipated Israel’s defense of Spinozism, particularly in his Essays on French Materialism and his Development of the Monist View of History. But Plekhanov too goes further than Israel, making Spinozism the ultimate philosophical basis of Marxism: “Present day materialism [i.e., Marxism] is a Spinozism that has become more or less aware of itself.”12

In Israel’s first book, he is not averse to including Jacobin and communist ideas as part of the Radical Enlightenment tradition. He explicitly links Spinoza’s social philosophy to Jean-Jacques Rousseau’s critique of property and to the “militant, revolutionary egalitarianism of Robespierre and the Jacobins.”13 This is all said in a positive vein, without animosity. In later contributions to his Radical Enlightenment series, however, Israel starts to take a much more strident and critical tone toward French Jacobinism. He issues a harsh and (as we shall see later in this series) unjust condemnation, going so far as to declare Robespierre a proto-fascist authoritarian. As Israel says, making known his sympathies for the Girondin faction: “Montagnard populism resembled less a libertarian, emancipating movement than an early form of modern fascism.”14

Beginning with the Jacobins as part of the Radical Enlightenment family, to casting them out as pariahs later, may strike the reader as abrupt. But there is a logic to this rejection, and one can see Israel’s animus towards Jacobinism grow volume after volume. As Israel’s books approach the French Revolution and its most socially progressive phase, we see the limitations of his historiography come to the fore. Israel is strongest in accounting for the philosophical ideas of early modernity, but weakest in analyzing popular struggles. While not neglecting to write about these struggles, Israel in his latest books sees them as violent and irrational affairs; compared with great intellectual debates, the entrance of the masses into history tends to be a side-affair: “But what I am arguing is that the Radical Enlightenment — and not the Enlightenment as such — is the only important direct cause of the French Revolution… Everything else…however crucial to the mechanics of the historical process that made the Revolution possible, was entirely secondary, in fact tertiary, in shaping the revolutionary outcome.”15

The entrance of the masses into the revolutionary process is not always a benign event for Israel, but can be a source of reaction. In his latest book, The Enlightenment That Failed, Israel makes his fear of the masses known:

The social groups that Marxist and mentalité historiography associate with radicalité — rebellious peasants, sans-culottes, Montagnard agitators, especially when evincing intolerance, nostalgia for an imagined past, proneness to violence, and repressive, retrograde and authoritarian tendencies — should never be styled “radicals” by any historian seeking accuracy, being far more accurately designated “authoritarian populist.”16

Israel’s first book in the Enlightenment series, Radical Enlightenment, came out in 2001, in a pre–Occupy Wall Street world. But his books that inveigh most vehemently against Jacobinism and Marxism came out after Occupy, the Tea Party movement, and the election campaigns of Bernie Sanders and Donald Trump. All these events were categorized as “populist” insurgencies by the mainstream press. While the concern about populism is virtually absent from Israel’s earlier work, it is now his bête noire.

It is hard to believe that contemporary politics has not shaped Israel’s current thinking. In liberal polemics against Marxism today, the word populist tends to take the place of the older slur of totalitarian. The rejection of Marxism has a long pedigree in Cold War historiography, and it mars Israel’s understanding of how Enlightenment thinking was part of class struggle and the 19th-century workers’ movement. In separating enlightenment from socialism, Israel ironically moves backward from Radical Enlightenment to a new Moderate Enlightenment in defense of liberal capitalism. In rejecting the Jacobins tout court, Israel not only defends Girondin conservatism but also the Thermidorean reaction, which was the conservative overthrow and backlash to the Jacobins after 1794. With its restoration of class privilege, Israel sadly presents the Thermidorean period as a continuation of the Radical Enlightenment.

Nevertheless, one cannot afford to dismiss Israel’s achievement in distinguishing Radical from Moderate Enlightenment. Israel remains a great starting point for intellectual history, but his trajectory ends in a place that threatens to undo and reverse his original insights. In resisting this backward movement, we need to radicalize the Radical Enlightenment and show that however crucial Israel’s scholarship is, it remains insufficiently “enlightened.”

Part II of this series on the Enlightenment will appear this Sunday.

Harrison is a philosophy professor who lives in Manhattan