We interviewed Virginia Guitzel, a trans public health worker who lives in Santo Andre, Sao Paulo. Here she discusses the connections between capitalism and trans oppression, as well as the way forward for trans liberation. 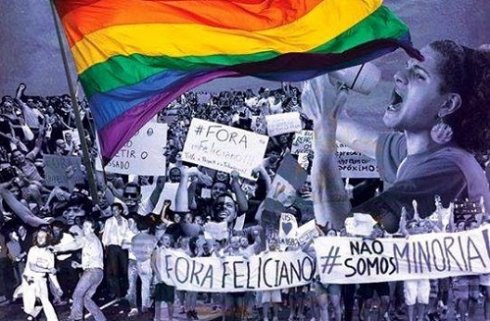 The United Nations recognizes Brazil as the country with the most crimes and murders perpetrated against trans people. In Brazil, there are no laws defending LGBT rights and we still don’t have basic rights like quality public health care and access to education about non heterosexual sexualities and trans and non-binary gender identities. The trans movement, which emerged during the neo-liberal offensive of the past 30 years, has not sought to make a difference in our national reality. The trans movement has become more and more institutionalized and integrated into the bourgeois regime. All of this despite LGBT issues being a big part of the June 2013 protests — during which we confronted police repression, the government and the religious fundamentalists who wanted to pass a law for a “gay cure”.

The Workers Party (Partido dos Trabalhadores, the political party of current President Dilma Rousseff) sold itself to voters as progressive but in over 12 years in power it has not taken a single decisive step in defence of our rights. They were so cowardly that they didn’t even position themselves against the “gay cure”. They (The Workers Party, or PT) make political deals with the religious right, like Pastor Marco Feliciano, a leading advocate of the gay cure, whom the PT helped make the head of the Commission on Human Rights. During the protests of June 2013, which forever changed Brazil, many people protested against Feliciano, as well as against the “gay cure”

How do you see the connection between capitalism and homo and transphobia?

The capitalist system seeks to appropriate all forms of oppression to perpetuate a regime of bourgeois domination. In a semi-colonial country like Brazil, capitalism does this in clear and obvious ways. The lessons we are learning about the limits of the degraded bourgeois democracy show us that equality in law does not mean equality in life. This is because under capitalism, there are no material conditions to eradicate oppression. Instead, the system divides workers using stereotypes and oppression. It weakens them with bourgeois ideology that propagates differences that hide the fact that we, the workers, all belong to one class.

The international movement against transphobia is getting stronger. It is fruit of a new generation that doesn’t want to restrict itself to imposed identities and gender binaries that serve to oppress women and don’t give working men choices for their own emancipation. That’s why the marginalization of trans identities is fundamental to capitalism. On one hand, it maintains the traditional family (which is being increasingly dismantled as single mothers are very much a reality). On the other hand, it maintains sexual desire for non-binary and trans people as a commodity to be consumed by relegating it to the streets via prostitution. At the same time, trans men and women serve as a reserve workforce that allow wages to be lower for everyone. Working as lower paid subcontracted workers, the most precarious of jobs, is seen as a great opportunity by many trans and non-binary people. For them, working a precarious, low wage job is welcomed due to the dangers of commodified sexuality.

I have heard you talk about organizing with the spirit of Stonewall. What do you mean by that? What lessons can the international LGBT movement take from Stonewall?

In Brazil and throughout the world, the LGBT and Queer movements are lacking complete independence from institutions like the police and the state. Stonewall broke the silence about being who we are and showed us our own strength. The LGBT struggle in these times of neo-liberalism has turned into a fight for civil rights without questioning capitalism or the limits of emancipation via consumption (Pink Money). A revolutionary spirit in times of neo-liberalism must revive the spirit of Stonewall, remembering our combative history. It means refusing to compromise with the police and the bourgeois government and it means not seeking the “lesser evil”. We cannot trust our rights to the goodwill of the bourgeois political parties. We LGBT workers are incompatible with this system of misery and human exploitation. Reviving the spirit of the Stonewall rebellion today is not only important, but a necessary condition for LGBT people to take their destiny into their own hands and stop all forms of oppression. 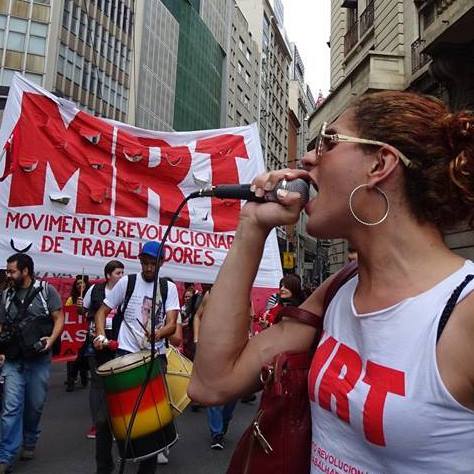 Many people say that workers are homophobic. All of us have suffered homophobia from workers at one time or another. Why organize a class-based LGBT movement rooted in solidarity with workers? Can you give us examples of times that LGBT people united with workers?

In Marx’s text, The German Ideology, he says that the dominant ideology is the ideology of the dominant class. That means that the working class is bombarded with stereotypes propagated by the bourgeoisie in order to divide us. The union bureaucracy, the current model of education, and all of the bourgeois media are transmission belts of these ideas. That is why we of the Trotskyist Fraction have created Esquerda Diario (Left Voice in the United States, Izquierda Diario in Argentina, Chile and Mexico). We hope to build a counter offensive to the bourgeois media with an online newspaper based on the point of view of workers, young people and oppressed people.

Is it difficult to build a class based LGBT movement and solidarity between LGBT people and straight workers? Absolutely. But the difficulty pales to the strategic necessity of an LGBT movement united with the working class. And we have many examples to build upon. We have historic examples, going back to 1895. In that year, the biggest chapter of the Second International was in Germany, where the communist party spoke out against the imprisonment of Oscar Wilde. It was the first time a political party spoke out against sexual repression. But defending LGBT rights isn’t just a long past history. Wherever we of the Trotskyist Fraction do political work, we revive that history.

For example, last year in Argentina, there were many important struggles in the Northern Zone of Buenos Aires where one of the factories, MadyGraft (formerly known as Donnelley) is now occupied by its workers. Prior to the workers taking over the factory, they defended a trans worker who was being harassed by her boss, who refused to call her by her name and to allow her access to her own bathroom. The workers had a lively discussion about class unity against their employers and confronted their boss in defence of their trans co-worker. This action demonstrates that they are the only ones capable of guaranteeing the rights of oppressed people in reality. If a law had been passed, their employers would find a million ways to get around it. Only the workers united in defence of their co-worker could guarantee her rights.

In Brazil, I was able to experience firsthand the possibilities of workers in solidarity with LGBT people. The first was at a strike of sub-sub contracted workers (they worked at a company that was subcontracted by another company, which was subcontracted by the Sao Paolo metro). The work was very precarious and the workers had very little education. By the logic of many people in the LGBT movement, it was almost suicide to be a trans woman in that space. Yet, I went and introduced myself, saying that I came to show solidarity with the workers. Many workers stared at me and looked at me very strangely. However, the days at the strike went on without incident.On the last day of the strike, the union bureaucracy wanted to isolate the workers, so they needed to prevent outside support from people such as myself and the Revolutionary Workers Movement (the political party I am a part of). They started a smear campaign against me, questioning if I was a man or woman. The workers responded, “She came here to defend us, long before the union. She stays.” This demonstrates how the class consciousness of workers advances during a struggle, such as a strike.

The second example was during the biggest strike of the state universities of Sao Paulo in history, which lasted 118 days. During this strike, for the first time in history, a union organized a debate entitled “Sexism, Homophobia and Transphobia” in the midst of the strike. This demonstrates how the union can contribute to undermining the influence of bourgeois ideas on our class, the working class. These workers later went on to protest the actions of the Sao Paulo police who brutally tortured a trans woman, Veronica Bolina.

Last Friday, the United States Supreme Court ruled in favor of marriage equality. What steps should the LGBT movement take in light of this victory?

The passage of marriage equality in the US and its territories rocked Brazil and the world. Here, we celebrated this as a victory against the conservatives who try to take away our rights. To all those who fought for this victory, I send you my sincerest congratulations.

I think the first task that the United States LGBT movement faces is to not let this victory be capitalized on by Obama and the White House who attack immigrants, the poorest LGBT people and black people who have bravely faced off against the police and the government in defence of their right to live.Today’s task is to build an international LGBT movement based on the most profound experiences of class solidarity and revolutionary organizing we have seen, like the Homosexual Action Front in France, Somos in Brazil and Our World in Argentina. We need a movement for sexual liberation that is anti-capitalist and intervenes in the class struggle. We need a movement that questions queer theory, which does not have a plan to destroy capitalism. We need a movement that also questions institutionalized LGBT movements that ask us to compromise our rights or put them off for tomorrow in order to support the existing regime. This will only reproduce the misery of what is possible in capitalism. Our task is to internationally build an instrument for the working class and oppressed people to end what Marx calls “humanity’s pre-history”, the system of one person dominating another For us of the Trotskyist Fraction, this means building a movement to rebuild the IV International. This means building communist parties throughout the world, which, with the strength of workers and of oppressed people, can destroy capitalism and create a society in which we are all truly free.

Virginia is a militant of the Movimento Revolucionário de Trabalhadores
(Revolutionary Workers Movement), part of the international Trotskyist Fraction. She is also part of the women’s group, Pão e Rosas (Bread and Roses). She is a weekly contributor for Esquerda Diario, the international network of left news websites (in the United States, Left Voice).

Interview and Translation by Tatiana Cozzarelli