We interviewed Ilan Pappé, world-renowned scholar, author of The Ethnic Cleansing of Palestine and proponent of the BDS movement. 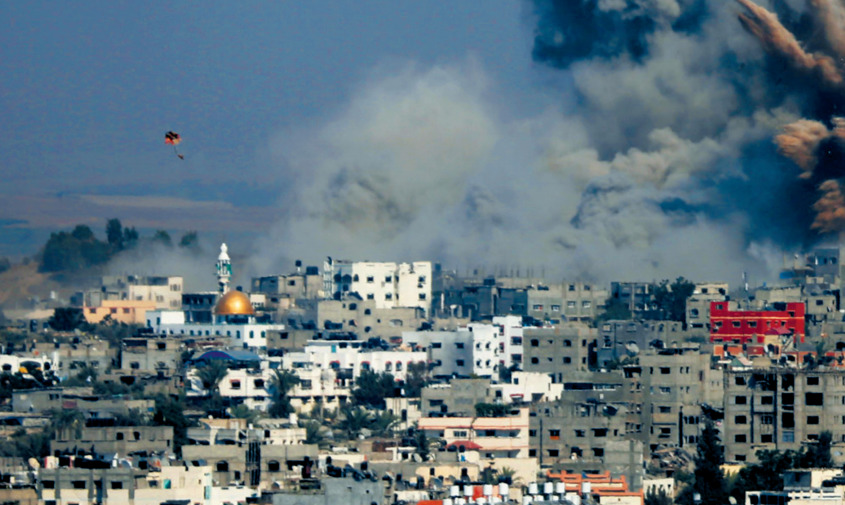 Ilan Pappé is a historian, socialist activist, professor at the University of Exeter, and supporter of the Campaign for Boycott, Divestment, and Sanctions (BDS). Of Israeli origin, he is a world-renowned scholar on the Palestinian-Israeli conflict and has written numerous books on the subject, including The Ethnic Cleansing of Palestine and The Idea of Israel: A History of Power and Knowledge.

You’ve talked and written about the concept of homeland as justification for destroying the native population. What is the meaning of this concept and what are some examples of its use in other places? In what sense is applied differently in Palestine than in other countries?

The context is the phenomenon of settler colonialism: the movement of Europeans, because they felt unsafe or endangered, into non-European areas in the Americas, Africa, Australia and Palestine. These people were not only seeking a new home, but also a new homeland. Namely, they had no wish or plan to come back to Europe.

The only problem was that the lands they coveted were already inhabited by other people. In most cases, their solution was the genocide of indigenous people. In two cases, the solution was different: apartheid in South Africa and ethnic cleansing in Palestine.

In your book, The Ethnic Cleansing of Palestine, you suggest that the objectives of Israel have remained the same since 1948. Can you elaborate?

As any settler colonial movement, the Zionist movement is motivated by the logic of elimination of the native. In the period after the second World War, elimination is more complex and maybe less inhuman, but still drastic. The desire of the Zionist movement to create both a Jewish state and a democratic one means that there is always a wish to take over as much of Palestine as possible and leave in as few Palestinians as possible.

This is the background for the Israeli ethnic cleansing operation in 1948; an operation that ended with expulsion of nearly a million Palestinians and a Jewish takeover of 80 percent of the land.

However, the ethnic cleansing of 1948 was not a complete project. There was still 20 percent of the land that Israel did not have and there was a Palestinian minority within Israel. The vision of a purely de-Arabized Palestine was still there, though the means differed.

The means included the imposition of military rule over the Palestinians in Israel and refusing to allow the refugees to return. The space was not enough and the opportunity to enlarge it came in 1967, but then the demographic problem emerged again. This time, the means were apartheid, military occupation and cutting the land into enclaves and Bantustans.

You have described Israeli actions in Gaza as “incremental genocide.” What is the meaning of this term?

“Incremental” means that there is no dramatic, massive killing of people of a certain race or nation. However, a strategy like the one Israel has been conducting since 2006 has led to what the UN called “the transformation of the Gaza Strip into an uninhabitable place” – so this not just the constant killing of civilians that makes it genocidal, but also the destruction of the infrastructure.

Do you think that Israel is carrying out ethnic cleansing in the West Bank and East Jerusalem on a similar scale as what took place in 1948?

Well, the fact is, just in the Greater Jerusalem areas since 1967, hundreds of thousands of Palestinians were transferred in various means – from massive expulsion or by moving their neighbourhood to the West Bank or by not allowing them to return if they left the country. After 1967, ethnic cleansing is more about moving Palestinian into enclaves rather than out of the country.

You argue against a two-state solution on the grounds that it is not viable and instead are in favour of a bi-national state. What are your reasons for coming to this conclusion? How do you think a bi-national state could be achieved and how would it operate?

The two-state solution is not viable for three major reasons. First, it only applies to 20 percent of Palestine and to less than half of the Palestinian people. You cannot reduce the problem of Palestine in such a way either geographically or demographically.

Second, Israel created such a reality on the ground, in terms of settlement and colonization, that it would be impossible to create a normal Palestinian state, even if one were to accept this solution. The best you can hope for are two Bantustans: one in the West Bank and one in the Gaza Strip. This is not a solution.

Finally, there will be no solution to the conflict without respecting the right of the Palestinian refugees to return and the two-state solution does not respect this right.

What has been the effect of the growing international criticism of Israeli actions against the Palestinian people? How has this affected the peace movement in Israel?

In the last ten years, civil societies around the world had enough of their government’s passivity on Palestine. Therefore, they took independent action by supporting the Palestinian civil-right call for boycott, divestment and sanctions against Israel.

The world governments are still not pressuring Israel to change its policy and therefore it is difficult to expect any change from within. There is no peace camp in Israel. There is now a small group of activists who are encouraged by the BDS movement and are trying to educate Israelis about the human and civil rights violations in the past and present. These groups from within will not survive; it is necessary to put more international pressure on Israel.

What role do academics or intellectuals have in the struggle for the liberation of Palestine?

A very important role. They can tell the story about Palestine that Israel wants to hide from the world. There is enough evidence, and today there are enough scholars using it, to tell the history as it really happened. We will need to deal bravely with this history if we would want to have a genuine process of reconciliation in Israel and Palestine.

How important is the BDS campaign? What do you think it can achieve?

Very important. It has two major roles: first, to send a painful but necessary message to Israel that there is a price tag attached to its continued policy of dispossession and colonization. And secondly, to galvanize world public opinion and activism around a campaign that would not let the Palestine issue be forgotten.