Airport employees across the Eastern seaboard face some of the toughest working conditions in the country. This past June, for the first time, workers from Miami to New York staged a joint strike action. 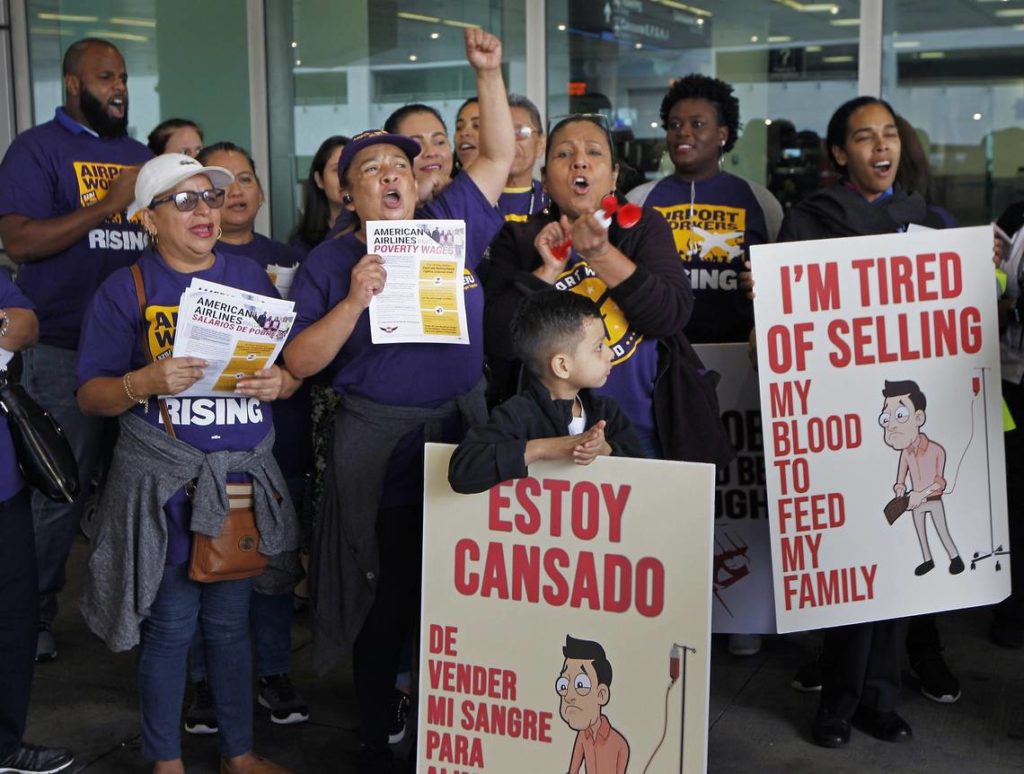 Workers of the airport service company, Eulen America, went on strike across the country on Thursday, June 27. In a coordinated action, workers at New York’s JFK, Fort Lauderdale (FLL), Miami International Airport (MIA), and Ronald Reagan airport in DC performed a conjoined strike to protest the abuses by their employer.

It was a one-day strike organized by 32BJ SEIU to protest working conditions and wage theft violations with the “use it or lose it” nature of the company’s paid time off (PTO) policy. Eulen is a Spanish-owned Airport company that provides a number of services, from bag handling, queue management, security and, most notably, wheelchair assistance. In JFK there are anywhere between 180-300 workers, in DC there are over 100, Fort Lauderdale 150, and Miami has the overwhelming majority at around 1,500. Altogether, Eulen employs roughly 2,000 workers, and none of the facilities are unionized.

Eulen workers are regularly suspended in response to absences or lateness according to a stringent disciplinary system put in place by the company. In a particular suspension case, a worker fainted and was sent home early by a manager, but it was later designated as an unjustified absence.

The company’s paid time off (PTO) policy is one of the major grievances around which the workers rallied. The PTO policy demands that employees work to accumulate time off for both leisure and treatment of illness. In addition, it forces them to take time off at a specific point in the year—otherwise they forfeit the time they have acquired through tireless work. For example, a worker accumulates one hour of PTO for every 30 hours worked. But even if a worker manages to accrue enough hours of work to take a couple of weeks off, PTO is capped at five days a year. What a creative way to exercise further control over worker’s efforts, their time, and their lives!

Many workers have reported being unable to attend funerals of relatives because they had not accumulated enough PTO for them to go without drastically setting themselves back financially. One worker who has been affected by this is Carlos Rodríguez, who has been working at JFK Airport for several years. Recently, he was forced to miss his mother’s funeral in Guatemala because of this policy.

Other issues faced by workers on an everyday basis include carrying luggage or pushing passengers in wheelchairs that are too heavy without the proper equipment, resulting in injuries. A worker reported that, despite Eulen employees being formally instructed to not push two chairs under any circumstances, they are often pressed to do so by their managers. Samson Lee deals with baggage handling at Miami International Airport. Last month, he injured his hands from hoisting and moving a number of bags that were 70-100 lbs each. He was still expected to work his next shift despite having sprained his wrist. These abuses have become grievances that have propelled Eulen employees to mobilize and take action to curb their management’s violations.

Apart from these general complaints nationwide, Eulen workers face more specific issues at different airports. For example, workers in New York do not get a uniform allowance, which is mandated by the state’s minimum wage laws—legal protections that do not apply to workers in Florida. Understanding the need to take real action in solidarity, workers from up and down the eastern seaboard rallied around their various grievances.

Although the company has shown a refusal to implement the workers’ demands, this display of unified action is a first step in strengthening the workers’ morale and building workers’ solidarity. They understand the effects of collective worker action and the power of withholding their labor, and can now build on this golden experience to continue their fight in the overall battle that is class struggle.