“Everyone Up Here Is United”: The Democratic Unity Debate 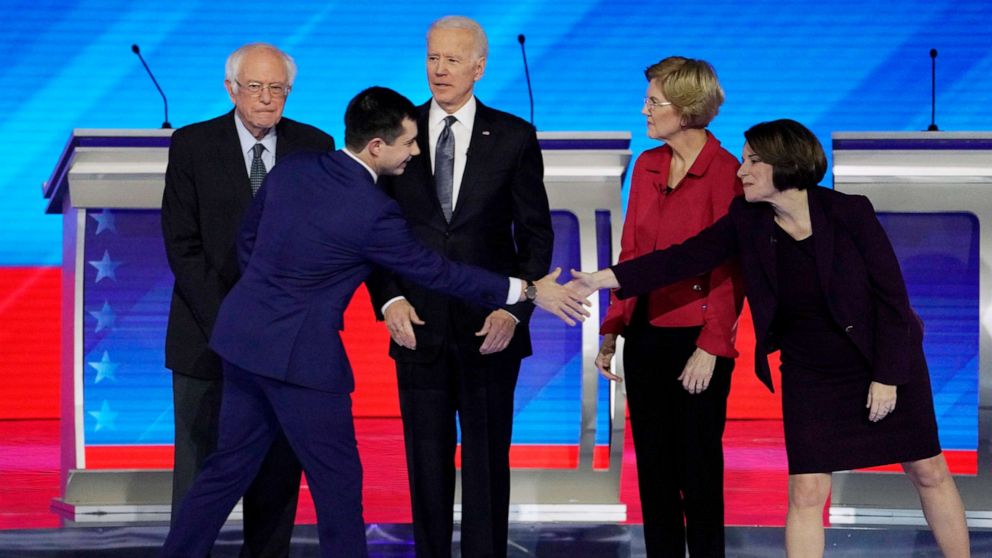 It has been a disastrous week for the Democrats. On Monday, the Iowa Caucus was riddled with controversy after partial results were not released until Tuesday afternoon. On Tuesday, Donald Trump towed the Republican Party line in his most right-wing State of the Union address yet. On Wednesday, the impeachment ended with a whimper as Trump was aquitted without witnesses being called. Trump currently also has the highest approval ratings of his entire term. The internal tensions in the Democratic party — embodied in the progressive wing represented by Bernie Sanders and the establishment wing represented by Joe Biden and Pete Buttigieg — are stronger than ever, and there are accusations of both election rigging and incompetence in the aftermath of the Iowa debacle. The central tension of this debate was that the Democratic Party had to show itself unified in the face of the insurgent Trumpist onslaught, but at the same time, it had to deal with its insurgent wing — represented by Bernie Sanders — which, although more “democratic” than socialist, ultimately does not represent the strategic interests of the Democratic establishment and the capitalists.

The Democratic debate last night was by-and-large defined not by the divisions, but by the agreements. Bernie Sanders summed it up best when he said “Everyone up here is united.” The same disagreements we’ve heard in the previous debates were re-hashed — Medicare for All, Buttigieg’s lack of experience, and Joe Biden’s Iraq war vote — but they were always quick to highlight similarities and unity against Trump. Tom Steyer went so far as to paint everyone with the same brush, saying “everyone up here has a better health care plan than Trump” before going on to say that all that really mattered was “beating” Donald Trump. After a good week for Donald Trump and a bad week for the Democrats, the Friday night debate was damage control on live TV in an attempt to redeem the party from the sins of earlier in the week.

The night was good for the Democratic Party but outlines a challenge to Sanders. Sanders largely came in line with the rest of the party and once again pledged to support whoever is chosen as the nominee. This reveals that he is no longer interested in running — as he initially did in 2016 — as a candidate who is opposed to the Democratic Party establishment, openly criticizing the process, the media, and the establishment. Of course, this doesn’t mean that Sanders is an organic part of the Democratic Party establishment — indeed, the Iowa debacle represents that more than anything — but he is taking steps to come more in line. This is a win for the Democratic Party because it means that their most popular candidate in many states won’t present any real opposition to them if he doesn’t win. However, it is somewhat shocking that Sanders took this tack in the week after he was unceremoniously robbed of an election victory in Iowa under suspicious circumstances. What this shows is that Sanders is a somewhat reluctant member of the Democratic Party and will be a good soldier when the time comes — just as he was in 2016 when he campaigned for Clinton.

The overall unity of the Democrats could be clearly seen during the foreign policy section of the debate. Even as the ABC moderators tried to stoke fights, the candidates mostly refused to play ball. Biden refused to attack Warren on her position to remove “combat” troops from Afghanistan, and Buttigieg refused to hit Biden on his support of the Iraq War. As another example, when the moderator brought up Nina Turner’s recent op-ed arguing that Biden has repeatedly betrayed the Black community, Sanders — who had just declared U.S. society “racist top-to-bottom” — refused to agree with his own supporter. He would not say that Joe Biden — a man who has written racist bills, made racist statements, and supported racist politicians — had betrayed the Black community, except maybe in some “early actions.”

Another thing that the debate revealed is that, as many predicted, Iowa has narrowed the race down. It is currently between three candidates — Biden, Buttigieg, and Sanders — with everyone else gasping for relevance. The once insurgent campaign of Elizabeth Warren seems to be almost fully in the past, given that her polls have bottomed out and she failed to make any real impact in this debate. The same can be said for Amy Klobuchar, the pick of many in the mainstream media — including the New York Times — who seemed dead set on making her into a viable candidate despite the fact that her voter base seemed to be borderline nonexistent. She also found herself fighting for airtime, and she seemed the most out-of-place at this unity debate, beginning the night by taking some strong swings at Sanders that were largely deflected. Steyer and Yang continued their spoiler campaigns having, at times, some interesting spotlight moments but being reduced to supporting players to Buttigieg, Biden, and Sanders.

A Race to the Middle

In a narrowing candidate field, , though it is crucially still open this early in the primary race, a strategy of party unity seems like a strange one. Without a clear frontrunner after the controversial Iowa caucus, the candidates should be trying to distinguish themselves. Apart from Klobuchar’s shots at Buttigieg and Biden’s occasional jab at Sanders, however, the candidates refrained from attacking each other, even over the points on which they differ. This equivocating strategy at this point in the primary race is, in one sense, an attempt to appeal to moderate voters, who will play an important role in this election cycle. In many ways, the debate was directed to this sector of voters. Both Sanders and Trump have consolidated bases to the left and right, respectively; this means that the primary race — and the first debate after the official start of the primaries — is ultimately a race to the middle to clinch the moderate vote.

This was clear from the start of the debate; the very first question was whether Sanders, a self-proclaimed democratic socialist, could possibly win against Trump when his leftist rhetoric alienates more conservative voters in the wide base of the Democratic Party. While the candidates avoided directly attacking Sanders on matters of policy or values, they were willing to push back on this issue of electability; from Biden to Buttigieg, the candidates argued that Sanders’ “pie in the sky” program would be too much too quickly for middle class and more conservative voters who would vote Republican if Trump were not on the ticket.

In this debate, more so than in previous months, the candidates went to great lengths to frame themselves as anti-establishment, a foil to Trump’s own anti-establishment “drain-the-swamp” rhetoric. Even Buttigieg, a candidate with 40 billionaire donors, spoke about repealing Citizens United and talked about how he is an outsider because he is one of the only candidates who does not have experience in politics at the national level; he claimed that his inexperience is an asset because he does not have the political baggage of the other candidates and what matters is “judgement, not tenure.” Sanders was consistent in his own messaging, saying that ‘we must fight the 1%.” Warren spoke about the corruption of the system. One moment of dramatic irony was Steyer — the only billionaire on the stage — trying to frame himself as a left alternative to the other Democratic hopefuls. Andrew Yang also painted himself as a champion of the working class. He spoke at length about how “our communities” are losing money because of capitalism and that we need to re-frame towards “human-focused capitalism” — whatever that means. Everyone was tripping over themselves to seem like the most outside-the-box candidate except Joe Biden and Amy Klobuchar. Klobuchar spoke against political newcomers, equating them to Trump by saying that “we have a newcomer in the White House.” Biden relied upon his experience and referenced his past legislative “successes,” such as the Violence Against Women Act.

“Losing Faith that Government Works for Them”

Another theme of the debate was the diminishing public faith in institutions: the crisis of legitimacy of the presidency, the Senate, and the Constitution itself. But the Democrats acted as they have throughout Trump’s tenure and assigned the blame for de-legitimized institutions solely to Trump, rather than a failing of the institutions themselves. Even Bernie Sanders fell back on defending the Constitution. The notion, both from the progressive wing and the establishment wing, is that Donald Trump is the one who has degraded the august institutions of the presidency, Supreme Court, and the U.S. empire under his tenure as president. The implication of this — which was at times made explicit — is that under a Democratic president, the institutions of the regime will be restored to their former glory and continue to operate as they are supposed to do. The problem is that there is no such former glory: the Constitution is a racist and capitalist document that only exists to prop up the ruling class. The FBI is a counter-revolutionary organization that decimated the Black Panther Party and has targeted mass social movements for decades. The “former glory” is merely a status quo that is uncritically enshrined. There is no world, no president, and no situation under which the U.S. empire can be anything but repressive, capitalist, and racist. Trump has not degraded institutions but, rather, revealed them.

“We Need To All Come Together”

Many expected the Democratic debate to be a bloodbath in which the candidates really went for each other in an attempt to control the narrative heading into the New Hampshire primary. The Unity Debate flew in the face of this and shows that the narrative of “anyone but Trump” is still a convincing one within the Democratic Party. From the right to left wings of the party, common ground was found, disagreements were smoothed over, and one strategy was put forward: defeating Donald Trump in November. There were minor disagreements, and at times, some of the candidates took shots at one another, but nothing ever erupted into a full-on argument. This was not due to lack of trying on the part of the moderators. Loaded question after loaded question was lobbed at the candidates, and they by-and-large refused to take the bait.

This allowed the Democratic Party establishment to have a good night. They didn’t have to address the Iowa caucus results — and lack thereof — in prime time, and every candidate committed to supporting one another. The Democratic candidates are all loyal to one another and to the party. The crisis of the Democratic Party that was seen earlier this week has been glossed over, and it remains to be seen whether the New Hampshire primary will alleviate or deepen the crisis.