Everything You Need to Know About Sahra Wagenknecht’s “Left Conservatism”

Everyone on the German Left is talking about a terrible new book. We are all “bizarre minorities.” 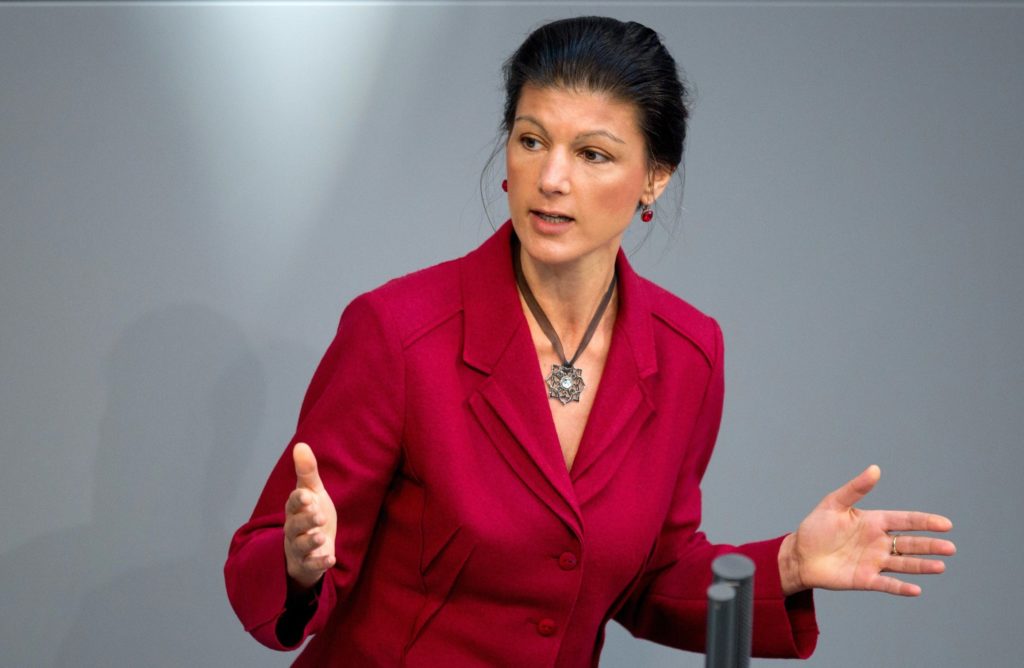 Today is the official release date for Sahra Wagenknecht’s new book Die Selbsgerechten (The Self-Righteous). But quotes from it have been circulating on social media for more than a week. PDFs are being passed around like a new version of samizdat.1Samizdat was a term for underground self-publishing that flourished in the Eastern bloc countries particularly in the late 1960s and 1970s. People are announcing their resignation from Die LINKE (the Left Party), which just nominated Wagenknecht to be its lead candidate in the state of North-Rhine Westphalia.

What does Wagenknecht say in the book? The 51-year-old politician from the former German Democratic Republic (GDR) has been hammering away at the same idea for years: if the Left wants to remain relevant, it has to stop defending the rights of immigrants. After the 2017 elections, for example, Wagenknecht had a simple explanation for the breakthrough of the far-right Alternative für Deutschland (AfD, Alternative for Germany) party and the stagnation of Die LINKE: “We made it too easy for ourselves in the refugee question.” She said that Germany finally needed to have a discussion about the problems caused by refugees — as if anything else had been discussed since 2015.

Die LINKE has a program calling for “open borders.” Wagenknecht became convinced that this — and this alone — was why her party was losing support in the East, where it was once a Volkspartei, a mass party.

Wagenknecht is now expounding on her worldview. The Self-Righteous is a 345-page diatribe against what she calls “identity politics” and “left liberalism.” She claims to offer a “counter-program for public spirit and social cohesion.” Two quotes help explain her view of “lifestyle leftists”:

Left-liberals claim to stand for diversity, cosmopolitanism, modernity, climate action, liberalism, and tolerance. On the other hand, they declare war on everything that left-liberal thinking considers right-wing: nationalism, locking backwards, provincialism, racism, sexism, homophobia, Islamophobia. For left-liberals, faith, nation, and homeland are signs of backwardness. (p. 99)

The theory behind this approach is called identity politics. It is at the heart of left liberalism, and provides the practical framework on which the left-liberal worldview is based. Identity politics amounts to focusing on ever smaller and ever more bizarre minorities, each of which finds an identity in some quirk which distinguishes it from the majority of society, and from which it derives the claim to victimhood. (p. 102)

As many critics have pointed out, oppression in 21st-century Germany is more than just a “quirk.” Oury Jalloh was burned to death in a police station in Dessau in 2005, murdered by the state because he was Black. Was that just a “quirk” of his?

Wagenknecht claims to stand for the working class, but when she uses that term, she is really only referring to the same people as Trump: white male workers without college degrees. But the German working class today is mult-ethnic, just like in the United States. This includes undocumented workers, refugee workers, queer workers, trans workers … It is kind of strange that Wagenknecht claims to oppose “identity politics” and then holds up religion and nationalism. Isn’t that just a kind of German nationalist identity politics?

It is hard to think of someone less suited than Wagenknecht to represent Germany’s white, male, less-educated workers. A millionaire who lives in a villa, she has a PhD in economics and spends most of her time in the Bundestag (the German parliament) and on talk shows. Recently, she was spotted at the birthday party of conservative Bavarian politician Peter Gauweiler, where other guests included Markus Söder, the Bavarian state prime minister, and prominent AfD members. A real downtrodden worker!

Wagenknecht has built up her profile by attacking low-wage and precarious jobs in Germany that were introduced by the Social Democrats and the Greens in the early 2000s. But when she criticizes these labor market reforms, she adds that this “was possible only because of the high level of migration to Germany.” She also blames immigrants for the decline of unions, noting that “the left-liberal narrative of a commitment to cosmopolitanism and diversity means that [unions] hardly dare even problematize the employment of immigrants.”

From Stalinism to “Ordoliberalism”

Wagenknecht was once on the left wing of Die LINKE’s predecessor, the Party of Democratic Socialism (PDS), which was the legal successor to the Stalinist party that had ruled East Germany before reunification. In 2001, on the 40th anniversary of the construction of the Berlin Wall, the PDS published a sort of mea culpa. Wagenknecht appeared on talk shows in the name of the PDS’s Communist Platform — defending the wall! The media loved her: a fairly young woman in a party of old men who was happy to say terribly provocative things.

She remained a self-described communist when the PDS became Die LINKE. While she never had a profile as an anti-racist campaigner, she never objected to the party’s call for open borders. It appears that Oskar Lafontaine, the former Social Democratic minister who founded Die LINKE, changed her thinking. Lafontaine, as prime minister of the Saarland state and head of the Social Democratic Party of Germany (SPD) in the 1990s, was a trailblazer when it came to racist policies. He was a key figure in striking the right to asylum from Germany’s constitution in the early 1990s. When he left the SPD in the 2000s, Lafontaine renounced many of his earlier neoliberal views. But he has consistently defended his racism to this day, stating that German workers need to be defended against Fremdarbeiter, foreign workers.

It was around 2016 that Wagenknecht began opening up to German nationalism. While she had once defended GDR-style Stalinism, she now argued that the “social market economy” and West Germany’s 1950s “ordoliberalism” (the variant of economic liberalism in which the state explicitly intervenes to help the free market) was the best economic system. She took the old SPD as a model — and became convinced that a focus on minorities was destroying the traditional Left.

For a New Party of the Left

Even if Wagenknecht isn’t aware, the socialist movement has always stood up for the rights of “bizarre minorities.” August Bebel, the leading socialist in the Reichstag in the late 19th century, was the first politician in Germany to stand up for the rights of homosexuals. Karl Liebknecht, who founded the German Communist Party, fought for full rights for immigrants and against borders. But Wagenknecht’s chauvinism does have a certain tradition in the socialist movement — hers was the position of the reformists and Stalinists.

The real reason that Wagenknecht’s party and similar parties are stagnating has nothing to do with “identity politics.” Parties like Die LINKE join government coalitions and implement neoliberal policies. We see this in Berlin, where the PDS and then Die LINKE have been in the government most of the past 20 years. This party privatized hundreds of thousands of apartments, leading to exploding rents, and cut wages in the public sector by 10 percent. Every single day, this “Left” is responsible for evictions, police repression, and deportations. A party calling itself “The Left” that is actually part of the neoliberal establishment creates the space for the far Right to get away with calling itself an “Alternative” — as in the AfD.

Wagenknecht is sometimes presented as an opponent of the “government socialists” in her party. But this is not true at all. Two years ago, she attempted to found an entirely new party with SPD and Green Party politicians, with the goal of creating a red-red-green government.

The storm of criticism against Wagenknecht is more than justified. Her appeals to chauvinism and nationalism have become so open that they can’t really be called “dog whistles” any longer. They are just plain old whistles. But there are plenty of Die LINKE politicians who will talk about “welcome culture” and “open borders” — and then deport people to Afghanistan. The Left Party, currently participating in three state governments, is responsible for about 2,000 deportations every year. So Wagenknecht’s book is not the only example of racism in Die LINKE.

Germany needs a new party of the Left, one that rejects every single deportation and all chauvinist ideologies. We need a Left that fights against the police, the state, and the capitalist system. Perhaps Wagenknecht, with her new right-wing provocation, will paradoxically help such a Left cohere in opposition to Die LINKE.