Excerpts on the Russian Revolution

There are countless texts about the Russian Revolution. Here are five excerpts that express the hope, bravery, strength and inspiration of that process. 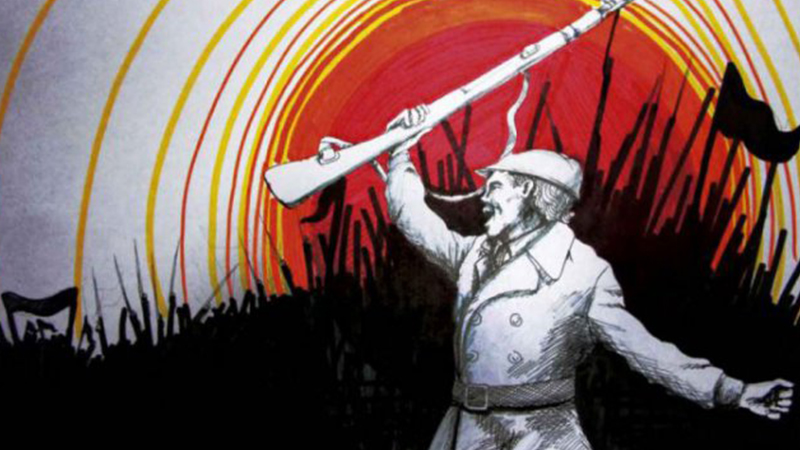 “To remember the 100 years of the October revolution is the opposite of a religious ritual or routinely remembering an anniversary. To come back to the October Revolution is essential, above all because it allows us to prepare for what is to come.”
Christian Castillo, member of the Party of Socialist Workers in Argentina.

In this spirit, we present five excerpts from texts about the Russian Revolution that inspire us to prepare for what is to come.

“If our generation happens to be too weak to establish socialism over the earth, we will hand the spotless banner down to our children. The struggle which is in the offing transcends by far the importance of individuals, factions, and parties. It is the struggle for the future of all mankind. It will be severe. It will be lengthy. Whoever seeks physical comfort and spiritual calm, let him step aside. In time of reaction it is more convenient to lean on the bureaucracy than on the truth. But all those for whom the word socialism is not a hollow sound but the content of their moral life – forward! Neither threats, nor persecutions, nor violations can stop us! Be it even over our bleaching bones, the truth will triumph! We will blaze the trail for it. It will conquer! Under all the severe blows of fate, I shall be happy, as in the best days of my youth! Because, my friends, the highest human happiness is not the exploitation of the present but the preparation of the future”.

Leon Trotsky, I Stake My Life!

“Nobody is born a Bolshevik. It has to be learned. And it cannot be learned solely from books either. It is learned, over a long time, by a combination of field work, struggle, personal sacrifices, tests, study, and discussion. The making of a Bolshevik is a long, drawn-out process. But when you get a Bolshevik, you have got something. When you get enough of them you can do anything you want to do, including making a revolution.James Cannon, ”

“Revolution is the blind protest of the mass against their own ignorant state. It is as important to Time as the first awkward struggle of the amoeba. It is man in the act of making himself.” (…) Time will give to the World War, the political revolution, and the social revolution their true values. We cannot do it. We are too close to the facts to see the truth. To have failed to see the hope in the Russian Revolution is to be a blind man looking at the sun rise.
(…) Mingled with my sorrow, the morning I left Petrograd, was a certain exultant, tragic joy. I have been alive at a great moment, and I knew that It was great.

“That night I saw a laborer, gaunt, shabbily-clad, plodding down a dark street. Lifting his head suddenly he saw the massive façade of Smolny, glowing golden through the falling snow. Pulling off his cap, he stood a moment with bared head and outstretched arms. Then crying out, “The Commune! The People! The Revolution!” he ran forward and merged with the throng streaming through the gates. (…) This historic session ends at six o’clock in the morning. The delegates, reeling from the toxin of fatigue, hollow-eyed from sleeplessness, but exultant, stumble down the stone stairs and through the gates of Smolny. Outside it is still dark and chill, but a red dawn is breaking in the east!”

The people around me appeared to be in ecstasy. They seemed about to burst forth spontaneously in a religious hymn. Trotsky read a resolution to the general effect that they were ready to flight for the workers and peasants to the last drop of their blood. . . who was in favor of the resolution? The innumerable crowd raised their hands as a single man. I saw the burning eyes of men, women, adolescents, workers, soldiers, muzhiks. Trotsky went on. The hands remained raised. Trotsky said, ‘Let’s this vote be your oath. You swear to give all your strength, not to hesitate before any sacrifice, to support the Soviet, which undertakes to win the revolution and give you land, bred and peace.’ The hands remained raised. The crowd approved; they took the oath. . . And the same scene was repeated all over Petrogad. The last preparations were made everywhere; everywhere the swore the last oath; thousands, tens of thousands, hundreds of thousands of men. It was the insurrection.