Expel the Enemy From Within: Cops Out of Our Unions and Hospitals

As clinical and nonclinical rank-and-file healthcare workers, we recognize that cops and their brutalism are endemic to the capitalist state. We demand that police are immediately expelled from our unions and healthcare settings. 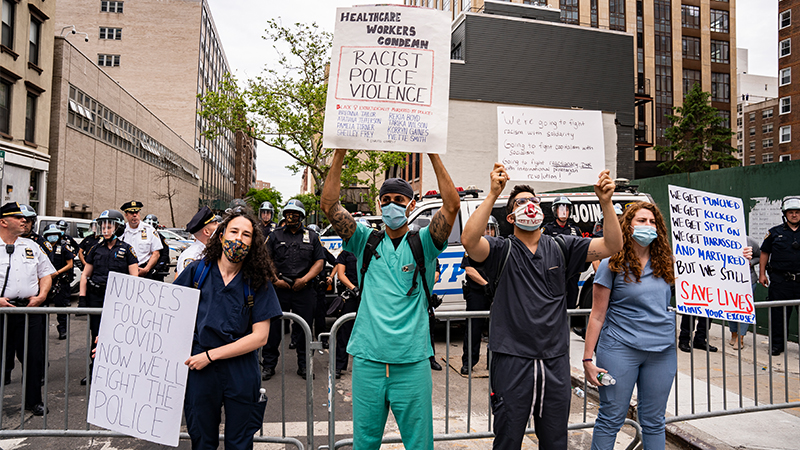 Over the last few weeks, thousands have spilled onto the streets, joining Black youth who rose up in response to the savage murders of George Floyd, Ahmaud Arbery, Breonna Taylor, Tony McDade and countless other Black people at the hands of police. Healthcare workers who are on the frontlines of the coronavirus pandemic are taking part, painting protests across the country with green and blue scrubs, white coats and surgical masks. This condemnation of the police and systemic racism has been expressed through the lens of health care with the words, “Police are a threat to public health.”

Over 1,700 healthcare workers signed our statement condemning the racist murder of George Floyd. Actions have been organized in the name of “WhiteCoats4BlackLives” (WC4BL) and “Frontlines for Frontlines.” Hospital workers are walking out of their facilities with raised fists, cheering protesters marching by. Some labor unions have carried out vigils to denounce the police killings.

No longer solely healthcare professionals, but as essential workers on the frontlines of the pandemic, we have thrown ourselves into the struggle as medics, jail support, marshalls and protesters denouncing the institution of police – racist to its core. We mobilize ourselves as a sector of workers rather than “citizens” or individuals, with greater social power when united in our ranks.

As healthcare workers, every day we bear witness to the brutal effects of a segregated, capitalist healthcare system. This system has led to a higher death toll among Black and Brown people during the coronavirus pandemic, which is now ravaging the Global South and the working classes and poor of Latin America, Asia, and Africa. We see how police brutality and systemic racism cause physical and psychological harm particularly to communities of color and Indigenous peoples.

Today, the State and the two bourgeois parties are attempting to exterminate the movement through co-optation on the one hand and brutal repression on the other. Democratic and Republican politicians assume center stage at protests, as if at campaign stops, announcing piecemeal reforms, many of which will not end police violence, but pacify the unrest in the streets. We have seen police attempting to clean up their image by handing out masks or taking knees with protesters by day, but continue their brutalizing by night.

Government officials from both parties have deployed riot cops and the national guard. Protesters are coming into our emergency rooms with broken limbs and abrasions. We are treating patients with respiratory distress, asthma exacerbations, panic attacks, and injuries caused by flash grenades, tear gas, and zip ties. We denounce the state repression and police brutality being carried out against protesters and the curfews that curtail our democratic rights. We demand the release of all political prisoners and that all their charges be dropped.

The Role of Police: Racism is Integral to Capitalism

As socialists, we understand that capitalism breeds racism; that capitalism in the US was constituted by a white supremacist slave system; that the ancestors of modern-day police were slave patrols and anti-riot mercenaries. Despite the confused notion that cops are “workers in uniform,” we know from our experience that the police are not our working-class brothers and sisters. Nor are they “invading agents.” Instead, cops and their brutalism are endemic to the capitalist state. The racist police protect the few who amass the wealth in our society – the few who own and control the levers of production and the state. With such dire inequalities, these few must be protected from the majority who are deprived of any means of subsistence except our own labor, who would otherwise revolt against our oppressors and exploiters. At the same time the police protect a system of laws designed to uphold and reproduce the inequality created under capitalism and its racist exploitation. There will be no vaccine to absolve ourselves of virulent racist policing. To abolish the police, we must abolish the conditions for their existence – capitalism itself.

Police Out of Our Hospitals and Clinics

Police create patients through their violence – as does systemic racism. We see on- and off-duty cops in our emergency rooms and hospital entrances. Police bring homeless, acutely ill and poor people to hospitals and we witness them coercing patients in their most vulnerable state.

In healthcare settings that lack sorely-needed personnel, training, and safety measures, some workers mistakenly look to police or security guards as a solution. But the police escalate violence and turn our care settings into traumatizing and injurious institutions. When a patient is agitated, the police only know to use threats, physical restraint and force. We cannot call the police to treat an altered patient, calm a frustrated patient, or assist a sundowning elder when they are known to murder the disabled and Black children in cold blood. Physical abuse and the threat of harm is never the correct means of de-escalation, securing a patient’s safety, or treating a patient.

Capitalism creates mass homelessness, interpersonal violence, and mental illness. When working-class and poor people exhibit violent behaviors or agitation, these are often symptoms of oppression caused by capitalism and neoliberal austerity policies, which over the last few decades have further concentrated wealth and increased social inequality.

We must remove the police from the institutions that serve a social need – hospitals, mental health facilities, clinics. We must discard the idea that police can solve our problems or make us safe.

The International Union of Police Associations (IUPA), with its 100,000 members, is affiliated with the AFL-CIO, as is the National Border Patrol Council, representing border patrol agents that hunt down and cage asylum seekers and migrant workers. SEIU, CWA and AFSCME all represent police and enforcement agents through their local affiliates. The nation’s largest cop union, the Fraternal Order of Police (FOP), staunchly advocates for police immunity for over 340,000 members. Philando Castile, who was killed by a police officer in Minnesota in 2016, was a member of Teamsters Local 320 for 14 years. His union also represents cops in the same district. But how can unions fight for the interests of the working class and denounce racist police brutality, when they also represent cops?

Police act in opposition to workers and social movements. They are sent in to break up picket lines, dissolve strikes, and destroy occupations. A cop union protects its members as they carry out their mandate as the guard dogs of capital. Whereas labor unions fight to secure better working conditions, job security, and related demands, cop associations negotiate contracts to ensure their members immunity from repercussions for brutality and other injustices.

To the union bureaucracy, cop unions appear as a couple hundred thousand dues-paying members. To us rank-and-file healthcare workers, socialists, and revolutionaries, the police in our unions and confederations are a putrid rot that must be excised from our ranks. We reject any move by the union bureaucracy to align the labor movement with a racist, murderous institution. We must disaffiliate all cop unions from our union locals and confederations.

The labor unions are working-class organizations that have historically fought for our interests. Although today they are steered by the union officialdom, we can struggle to take control and repurpose our unions into militant, democratic, class-struggle organisms that better our lot and advance our class interests against the capitalists.

Purge the Police Once and for All

As clinical and nonclinical rank-and-file healthcare workers, we join our fists against our enemies in blue who masquerade as members of the working class. We take up the fight against the racist police who terrorize patients in our workplaces by demanding an expulsion of police in healthcare settings. We call for these racist defenders of private property to be cast out of hospitals and clinics, as well as schools, transit systems, and other institutions and structures we need. We call upon other essential workers and rank-and-file workers’ organizations to fight for similar changes in their workplaces and unions.

Just as cops are adversaries for our patients, they are adversaries of the working class. Their role in enforcing a murderous and racist capitalist system is in conflict with our role as workers in defending our oppressed working class kin. As we struggle against these agents of the capitalist class, we take bold steps forward as workers in our struggle to end Black and Brown oppression under capitalism.