Explosions in Beirut: A Disaster in a Country in Crisis and Revolt

A double explosion devastated Lebanon’s capital on Tuesday. This disaster is a tragedy in a country which faces an economic and political crisis, marked by significant mobilizations for a year. 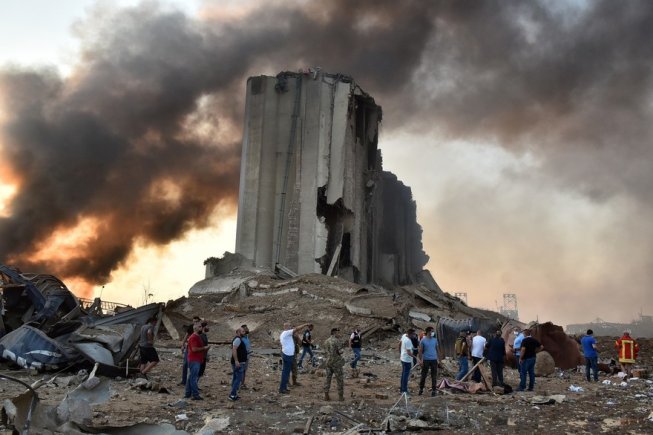 Beirut is in shock. The provisional death toll is already at least 100, with more than 4,000 injured, according to figures provided by Lebanon’s Minister of Health. The material damage is colossal; entire districts are ravaged. The city’s mayor, Marwan Abboud, estimates that “nearly half of the city is destroyed or damaged,” and that more than 300,000 people could find themselves on the streets, as reported by Le Monde.

The cause of the explosions is still undetermined, but Lebanese officials are putting forward the theory of an accident. According to Abbas Ibrahim, the Lebanese internal security official, a cargo of 2,750 tons of ammonium nitrate, which the government confiscated from a ship a few years ago, has been stored in the city’s port for the past six years and is believed to have caused the two fatal explosions. Ammonium nitrate is mainly used as a component of agricultural fertilizers, but it can also be used to make explosives. According to Al Jazeera, “Lebanese officials have known for more than six years that ammonium nitrate was stored in Hangar 12 in the port of Beirut and have done nothing to secure or remove it.”

A Surge of International Solidarity?

In the hours after the tragedy, countries around the world showed solidarity with Lebanon. One after the other, promises of aid came from France, Iran, the United States, Russia, Germany, Kuwait, and others. France sent two military planes carrying tons of medical equipment and a civil security detachment of 55 people, as well as emergency personnel. German chancellor Angela Merkel promised “support for Lebanon,” following in the footsteps of the United Kingdom and Canada.

The imperialist powers therefore seem to want to respond now, in a context of economic tension, whereas just a few days ago they were demanding drastic reforms. At the beginning of July, Jean-Yves le Drian, France’s Minister of Europe and Foreign Affairs took a trip to Lebanon where he urged the authorities of the country, which is going through a deep economic crisis, to undertake reforms in order to gain the support of the international community and affirmed that aid would not be paid out in the absence of an agreement between Lebanon and the IMF (notably the $11 billion promised at the CEDRE conference in 2018). In fact, negotiations with the IMF are in flux, since the institution has made its aid conditional on a series of reforms.

Tuesday evening’s tragedy also occurred in a climate of security tensions, owing in particular to frequent border disputes between Hezbollah and Israel in the south of Lebanon. Israel, which for several weeks now has been resuming a climate of latent war with Hezbollah, has denied any responsibility in this tragedy and has stated that it has offered its assistance, using international mediators, since the two countries are officially at war.

From Iran, the main ally of Shiite Hezbollah, through Qatar to Saudi Arabia, which has great influence over the Sunni part of Lebanon, the neighboring powers that play a decisive role in the balance of power in Lebanon have also announced their support. The combination of aid from opposing countries with divergent interests in the country will be a major challenge. The risk for Lebanon, already plagued by international influences, would be that Western international competition, whether imperialist or religious, would be played off against future aid, at the expense of a country already burdened by external interference.

A Tragedy in a Country in Crisis

The disaster straining a health system already facing the coronavirus pandemic. Last week the Lebanese government imposed new and particularly strict health security measures and closed its borders after an alarming new peak of Covid cases. This situation has sometimes left hospitals and doctors in Beirut without equipment to deal with the emergency. A Red Cross official said that some of the injured had had to be transferred to hospitals in other regions because those in Beirut were already at full capacity. This at a time when many hospitals in the city, some of the most important, were destroyed or damaged by the explosion. At the current rate of the outbreak, the country’s health system will quickly be overwhelmed. The country’s public hospitals have neither the equipment nor the staff to deal with it.

The disaster is also hitting a country whose economy is already on the brink of collapse. Lebanon is in the midst of its worst economic crisis in decades. The value of the Lebanese pound has fallen by nearly 80 percent since September, while the prices of current consumer goods have exploded, with inflation at nearly 90 percent. The resulting financial collapse paralyzed the country’s economy, causing inflation, unemployment, and poverty to soar. Nearly one in two Lebanese now lives below the poverty line in a country whose middle class was once considered one of the richest in the world. On Monday, Lebanese foreign minister Nassif Hitti resigned, saying the government could not avoid bankruptcy. This economic crisis is leading to a widespread downgrading of the population’s living standards: “The Lebanese middle class, considered as the richest and best educated in the Middle East, is the big loser of the crisis. [A] 30-year-old university professor, who earned the equivalent of $4,000 a month last year, now earns only about $800,” writes Le Monde.

The working classes are also on the front line of the crisis. “The social consequences of this contraction of activity,” wrote Les Echos in June, “are heavy. No less than 37 percent of Lebanese were unemployed in April, according to the International Labour Organization, and 48 percent of the population now lives below the poverty line, according to the government. This does not include the 200,000 foreign workers, including Ethiopian and Filipino domestic workers who their employers can no longer pay in dollars and some of whom are now hoping to be repatriated.”

In an almost symbolic way, on the morning of the double explosion, dozens of demonstrators tried to force their way into the Energy Ministry to protest power cuts and electricity rationing, which sometimes last 10 hours a day. The national electricity company symbolizes the breakdown of the Lebanese economy and is the source of 40 percent of the country’s debt.

In this already-bleak context, the two explosions almost entirely destroyed Beirut’s port and the country’s economic lifeblood. In a country that “imports almost everything it consumes,” the destruction of the port is a catastrophe.

Finally, this tragedy further weakens a failing and out-of-breath political system, as we wrote in our columns yesterday morning. “In this already catastrophic context, the double explosion risks reinforcing the social and political crisis. Some members of the Joumblattist bloc, Progressive Socialist Party — social democratic opposition — accuse the government of having devastated Beirut. MP Marwan Hamadé officially resigned today, saying he “no longer has any confidence in Lebanese institutions, especially the Parliament,” as reported in L’Orient-Le Jour. Shortly before, one of his colleagues, Hady Aboulhosn, denounced “a corrupt political regime, which only causes disasters and tragedies” and explained that he has “no confidence in the internal commissions of inquiry and the foolish and criminal authorities,” which have endorsed the storage of products as dangerous as ammonium nitrate in a civilian port. On social media, accusations of hypothetical Israeli or Hezbollah responsibility have also been made, which no evidence seems to corroborate.” This political crisis is also a crisis of the Lebanese confessional and community model, born with the Taif Agreement in 1989 to end the war.

It is against the backdrop of this crisis that massive mobilizations have taken place since 2019, pointing to corruption and clientelism. On October 17, 2019, following the government’s announcement of new taxes, notably on instant-messaging apps, and in a context of deep economic crisis, a protest movement began. It would lead to the resignation of Prime Minister Saad Hariri. This movement not only questioned the neoliberal policies and corruption of the government, but also challenged the entire Lebanese confessional and bourgeois system.

In our columns, last November, Joseph Daher, a Swiss-Syrian anti-capitalist activist and academic specialist on the Middle East and North Africa, returned to the exceptional character of the movement and its potential: “The breadth and depth of the current popular demonstrations far surpasses the previous ones. Demonstrations exploded not only in the capital Beirut, but also throughout the country: Tripoli, Nabatiyeh, Tyre, Baalbeck, Zouk, Saida and others. On Sunday, October 20, about 1.2 million people gathered in Beirut, and just over 2 million people demonstrated all over the country — in a country of 6 million people […] The social composition of the movement distinguishes it from previous protest movements: it is much more rooted in the working and popular classes than the demonstrations of 2011 and 2015, in which the middle classes played a more important role. […] Demonstrators mobilized in the streets across the country to denounce the very foundations of the political and economic system. In their view, all the religious parties of the ruling class are responsible for the deterioration of their socioeconomic conditions.”

All denominational political parties were targeted, including Hezbollah. “Confessionalism must be understood as a tool of the Lebanese bourgeoisie to intervene ideologically in the class struggle, to strengthen its control over the popular classes and to maintain them in a position of subordination to their confessional leaders. Confessionalism is a constituent and active element of the current forms of state and class power. From this perspective, confessionalism should be regarded as a product of modern times and not as a tradition of time immemorial. In the past, Lebanese ruling elites have been able to put an end to or crush popular protest movements through repression or by playing on confessional divisions. […] The non-denominational character of the movement is therefore of great importance in this context,” Joseph Daher said.

In April the demonstrators once again took to the streets, despite the containment measures, Molotov cocktails in hand to set fire to banks during the “hunger riots.” Thus, the tragedy of August 4 promises to be terribly painful, and it has hit an already-fragile building. In this context, the possibility of a resurgence of mobilizations appears to be a central perspective against the government and the crisis. In the face of the economic crisis and recession, while the pandemic has accentuated inequalities and misery, in the face of corruption, the only response will come from below for Lebanon, in the continuity of the mobilizations since 2019.

First published on August 5 in French in Révolution Permanente.