Extraditing Assange Would Be a Crushing Blow to Free Speech

On Monday, a UK court will decide whether Wikileaks founder, Julian Assange, will be extradited to face conspiracy charges in the United States. Extraditing Assange would be a crushing blow to the freedom of the press, and leftists should speak out against it. 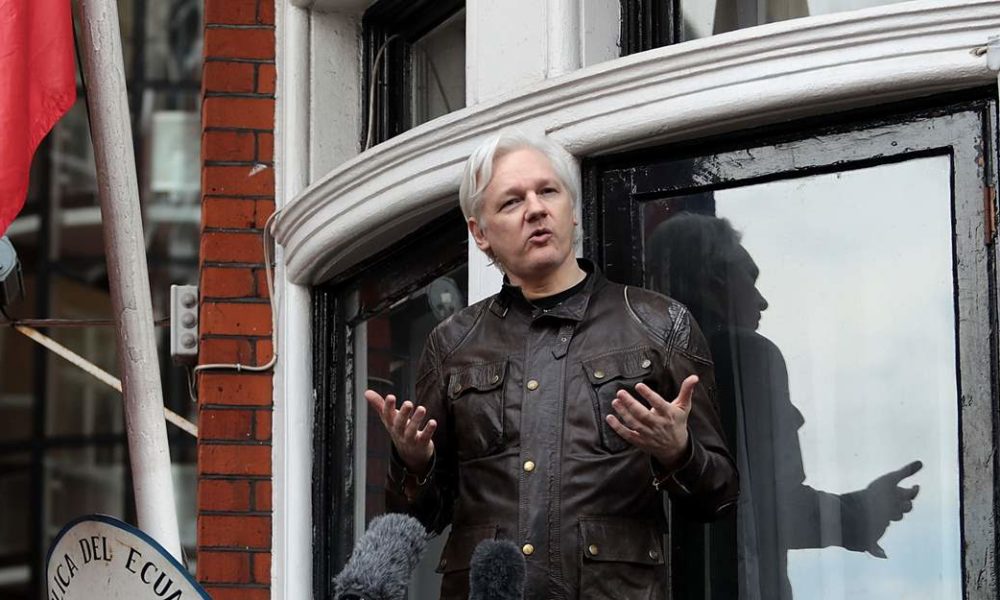 Soon, the American left will make a decision that may have grave consequences for global press freedom. No, it’s not the election in November where two capitalists will fight it out to decide who will implement deadly austerity. It’s the trial of WikiLeaks co-founder, Julian Assange, or more accurately, a  trial on press freedom. Assange is being used as an example of what happens when someone challenges the U.S. empire, and whether or not the left stands in solidarity with him will impact all future efforts to platform voices that fight against Western, capitalist propaganda.

After taking refuge in the Ecuadorian embassy in London for almost seven years, Assange was arrested by the London Metropolitan Police on April 11, 2019, and has since languished in England’s Belmarsh Prison where he appears to have been psychologically tortured. Though the U.K. is playing a significant and inexcusable role in the effort to imprison Assange, this is a U.S. led effort which seeks to expand the already terrifyingly widespread grip that the U.S. has over the world. The bourgeois media is ensuring that this attack on the fundamentals of journalism is being kept from public consciousness. This effort must be countered.

There is no validity to the hearings. The initial reason Assange was wanted in the U.K. was for refusing to comply with unrelated sexual assault charges which would have resulted in an extradition to Sweden. When faced with this extradition, Assange entered the Ecuadorian embassy where he would stay for nine years until the embassy revoked his asylum status. The assault charges against him have since been dropped. Still, Assange is being held in tortuous solitary confinement in a maximum security prison.

On September 7, the British court will hold a hearing to determine if Assange will be extradited to the U.S. If extradited, Assange will face 18 counts of charges for conspiracy to commit computer intrusion, related to WikiLeaks’s publishing of U.S. war crimes provided by whistleblower and former U.S. Army intelligence analyst, Chelsea Manning. Assange is facing a maximum of 175 years in prison because that’s what the U.S. empire does to people who embarrass it. However, the more severe consequence, if Assange is extradited and sentenced in the U.S., will be the precedent it sets for journalists, American or not.

The charges against Assange suggest that he played a role in helping Manning hack into a classified U.S. government computer. This is false. Manning worked with an anonymous member of WikiLeaks, believed, but not proven, to be Assange, to pass along the leaked documents to be published. This leak provided the public with thousands of documents revealing the U.S. military’s war crimes against the people of Iraq and Afghanistan. The most infamous of crimes revealed was a video, termed “Collateral Murder,” showing U.S. soldiers laughing as they opened fire on a group of civilians, including Iraqi journalist, Saeed Chmagh. If not for Manning’s bravery and WikiLeaks’s decision to publish these documents, the world would likely still be oblivious to many of the crimes that the U.S. military has committed during its brutal occupations.

Even if the anonymous WikiLeaks member Manning worked with was Assange, the  relationship was that of a journalist protecting their source. Manning did not receive help hacking, but was offered tips on how to protect her anonymity while getting information from a computer that she already had access to.

The act of helping a source protect their identity is not just standard practice in journalism, it is essential practice. A journalist is morally obligated to do everything in their power to protect their sources, and if Assange is sentenced for these actions, it will set a dangerous precedent that would seriously harm any journalist’s ability to keep their sources safe. This will not just harm press freedoms in the U.S., it will harm the entire world.

Assange is not an American citizen, but he is being charged under the Espionage Act of 1917, which was infamously created to punish journalists and political leaders for questioning or opposing American involvement in WWI. Through the imperialist U.S. alliance with Australia, of which Assange is a citizen, and the U.K, the U.S. is using Assange as an example of what can happen to any journalist who publishes truthful, ethically-collected information that exposes crimes of the U.S. government.

Citizens of the world, but especially those in the United States, the United Kingdom, and Australia, have an obligation to speak out in defense of Assange and demand he not be extradited. It is especially important for journalists to speak out, because if we do not stand with Assange now, it will only be a matter of time before we are targeted.

It’s no surprise that mainstream, capitalist media is showing no solidarity with this cause. The warmongers at the New York Times and on cable news, agencies that gave legitimacy to the lie that Iraq possessed weapons of mass destruction,  should never be expected to side with anyone other than the U.S. empire. What is most/especially disappointing is the lack of advocacy from many figures and outlets in independent media. Jacobin Magazine, one of the biggest outlets in left journalism, mentioned Assange most recently in an article published on January 12, 2020, but he was not even the main focus. The Nation published an article in defense of Assange in February, but has not provided any regular support for him since, and Current Affairs has had no coverage of the trial whatsoever. Many left YouTubers have also been lacking in terms of showing support. The Nomiki Show, The Majority Report, The Kyle Kulinski Show, and TBTV are just a few of many popular shows among leftists that have failed to give this trial the attention it deserves.

Of course, there are plenty of journalists and media commentators using their platforms to raise awareness of this issue. CounterPunch has been providing regular coverage of the Assange case. The Intercept,  which has been known to publish  coverage of the trial, explained the danger of an Assange extradition on an episode of “System Update” with Glenn Greenwald in April . Aaron Mate, Jimmy Dore, George Galloway, and Richard Medhurst have also been providing routine  coverage.

I was wrong about Julian Assange. His prosecution is not about protecting “national security.” It’s about protecting the U.S. empire & U.S. imperialism. Assange exposed U.S. war crimes & Americans should be outraged not at Assange, but at our government for committing war crimes.

Perhaps most notably, podcaster Ryan Knight recently tweeted to his more than 373,000 followers that he was wrong about Assange. Knight also retweeted information on the issue and explained why it’s important for journalists to stand with Assange. Knight, who only just left the Democratic Party this year after months of being a fierce supporter of pro-war liberal, Elizabeth Warren, is not the typical Assange supporter. This new support for Assange from Knight could be representative of a larger population of former liberals who are shifting politically. At the very least, it demonstrates that it is not too late for voices in the media to admit they have been wrong and stand with Assange now when it matters most.

It cannot be emphasized enough how essential it is that attacks on press freedom, like the extradition of Julian Assange, are stopped. The global pandemic has triggered an impending financial collapse and brought all the inequality and violence of capitalism to mainstream consciousness. America’s long history of police lynchings of Black people has finally reached a boiling point, and the uprisings in support of Black lives have been met with violence and terror by the far right government and their foot soldiers in the military, federal law enforcement agencies, state and local police departments throughout the country, and white supremacist militias. In response to all this, Americans are being told that they can solve their problems by choosing between two racist, warmongering, bourgeois politicians, both of whom openly support the very institutions that the working class is now rising up against. Fortunately, this year, we’ve seen a sustained protest movement spread to all 50 states.

This movement could be affected by the outcome of the Assange hearing. Organizing efforts have always relied on fearless independent journalism in order to counter whatever narratives the powerful and their allies in mainstream media try to push. The power of independent journalism to break through capitalist, imperial propaganda is the very reason the Espionage Act, which Assange is being tried under, was created in the first place. The outcome of the Assange hearings may determine not just the fate of a free press, but the fate of current and future organizing efforts which rely largely on independent journalism in order to thrive and sustain mass support. An Assange extradition would be a major blow to the truth and to press freedom. For this reason, we must all stand with Julian Assange, for his sake, and for the sake of all workers who seek to create a better world.